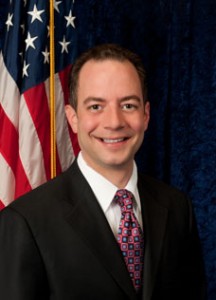 In January, the mainstream media was a bit shocked to hear that Reince Priebus, Chairman of the Republican Party, postponed the start of the Committee’s winter meeting so that members could first attend the March for Life that morning. At the time, he said:

We’ll be there to send a message: We are a pro-life party. Life is a gift, and it must be protected. That means advocating for our beliefs, embracing the right to life, and celebrating the blessing of adoption.

Reflecting on the event afterward, Priebus shares that he was surprised by the response of pro-lifers to his gesture of postponing the start of the meeting. He said:

The total appreciation that we got from life groups across the country was a little overwhelming. But it was the appreciation that sort of woke me up to say, Why are these folks so appreciative of something that I thought was a pretty easy decision to make?

So I thought to myself, if these folks are this appreciative of something so simple, maybe we need to start providing people of the core positions of our party more, so we can grow in places we are strong. To me it was sort of a wake-up call.

Perhaps a return to the core social values of the party’s platform will boost Republicans’ acceptance by mainstream America in the coming election season. On abortion, that will involve being outspoken regarding the party’s stance against government funding, and supporting the appointment of judges who are thoroughly pro-life.

The Republican Party’s official platform on the “sanctity and dignity of human life” reads as follows:

Faithful to the “self-evident” truths enshrined in the Declaration of Independence, we assert the sanctity of human life and affirm that the unborn child has a fundamental individual right to life which cannot be infringed. We support a human life amendment to the Constitution and endorse legislation to make clear that the Fourteenth Amendment’s protections apply to unborn children. We oppose using public revenues to promote or perform abortion or fund organizations which perform or advocate it and will not fund or subsidize health care which includes abortion coverage. We support the appointment of judges who respect traditional family values and the sanctity of innocent human life. We oppose the non-consensual withholding or withdrawal of care or treatment, including food and water, from people with disabilities, including newborns, as well as the elderly and infirm, just as we oppose active and passive euthanasia and assisted suicide.