Although it is estimated that one in four pregnancies end in miscarriage, the experience can be incredibly isolating for a woman grieving the loss of her child. This reality has prompted women to break the silence by sharing a very important message: you are not alone.

Earlier this year, reporter Sarah Krueger of Durham, North Carolina, opened up on social media about her painful experience of enduring three miscarriages over the span of 13 months.

“Social media often shows the mountaintops, not the valleys,” she shared on Instagram. “Unfortunately, I’ve had a few valleys in the last 13 months, with three miscarriages, the most recent of which just happened. The pain of it all really sunk in when I called the on-call doctor a couple days ago.”

Sarah explained that the doctor asked her how many pregnancies she has had and she told him “three.” When asked how many deliveries, the painful answer was “zero.”

In a recent interview with WRAL, Krueger shared her journey with infertility and why she decided to publicly talk about her experience losing three children due to miscarriage. “The reason I wanted to talk about my story is just because I think the silence surrounding this issue can make it feel like its something that is uncommon, but that is so false. There are so many of us,” she said.

Krueger described wanting to protect the children inside her womb from the moment she found out she was pregnant. Losing her babies made her feel like she had failed them and she wondered often if she had done something wrong. By the time she experienced the third miscarriage, she explained, “I didn’t know how much more I could take.”

After experiencing the third loss, Krueger took some time off from work and began seeing fertility specialist Dr. David Walmer, co-founder of Atlantic Reproductive Medicine in Raleigh, North Carolina. Walmer shared that an estimated one in six couples struggles with some aspects of fertility.

Krueger described feeling isolated and alone throughout her experience with loss, and often wondered, “why me?” Learning that so many other women were facing similar struggles, she decided to share her experience as a reminder to others that they aren’t alone. “If I can help other people know that they’re not alone, then I’d like to do my small part to do that,” she said.

Krueger also joyfully shared that she and her husband are expecting another baby, due in December. 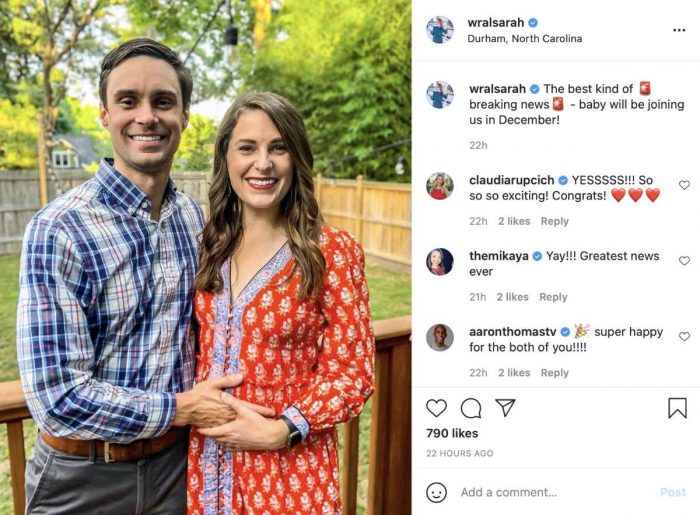 Krueger joins a growing cadre of courageous women who are breaking the silence on miscarriage. In May, Ben Shapiro’s sister, Abby Shapiro Roth, posted a heartbreaking video on YouTube reflecting on her recent miscarriage. She explained that she received strong support from family and friends, including her husband, and said that it helped her to know she is “not alone” because so many women have suffered miscarriages, but believes that “more women need to talk about it, so that it doesn’t feel so lonely.”

As Live Action News has repeatedly reported, miscarriage and infertility are surprisingly common. In fact, over 6 million women in the United States struggle with infertility. Many women turned to NaPro Technology, which has up to an 80% success rate for couples struggling with infertility, utilizing the charting of cycles along with medical or surgical restorative treatments that address the cause of infertility.

Shirelle Edghill, a certified FertilityCare practitioner with Infinity Fertility, told Live Action News of a client who used NaPro to conceive after infertility. The client, Jenny, had been diagnosed with PCOS, and her husband had been diagnosed with low sperm motility. They eventually conceived twin babies through IVF, but devastatingly lost their son and daughter at 21- and 22-weeks gestation. Edghill referred the couple to a NaPro physician, Dr. Jeremy Kalamarides, based out of Austin, Texas. Jenny was able to conceive and gave birth to a healthy baby boy.

Jenny’s story is a reminder that there is real hope for couples experiencing miscarriage and infertility, and that there are resources available, like NaPro, that respect the dignity of the mother and child.