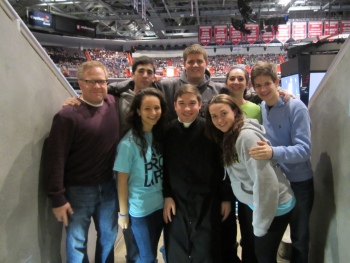 Saying all across the nation that we will never give up.

Monday, I had the opportunity to participate in a March for Life rally in Chicago held by Joe Scheidler and the Pro Life Action League. The rally began at 1:30 outside Holy Name Cathedral, following the 12:30 Mass. There were a few hundred pro-lifers, both young and old, who gave their time to come out for the march, despite the very cold weather. Many of them were young college-aged kids from numerous colleges and universities around the Chicago Land area, along with numerous pro-life organizations, including Students for Life of Illinois. For a couple of hours, we marched along Michigan Avenue and had pro-life leaders speak, including  Joe Scheidler of Pro Life Action League, praying a rosary for the unborn,  chanting, and singing with all the pro-lifers during the march.

I’m very glad to see more marches taking place across the nation, especially if one is unable to make it for the March for Life in Washington D.C. or California, which has their Walk for Life among other states.

Although I was unable to make the Palatine event, I was glad to go the following day in downtown Chicago. This is a great start to a tradition where I will look forward to attend again next year, but I also hope to attend the March for Life in Washington. Not only will the expected record-breaking attendance be physically present in Washington this Friday, but all pro-lifers will be there spiritually as we come that much closer to putting an end to Roe v. Wade and abortion – to becoming the pro-life nation we once were. President Obama’s inauguration may have been a loud voice, but all pro-lifers combined will make an even bigger voice come this Friday.

Not only is there a loud voice spoken in Washington, California, and Chicago, but I’m glad to see more cities and states holding pro-life marches across the nation during the anniversary of Roe v. Wade. We have had forty years of this destruction, and we will never give up until this madness ends and become pro-life.