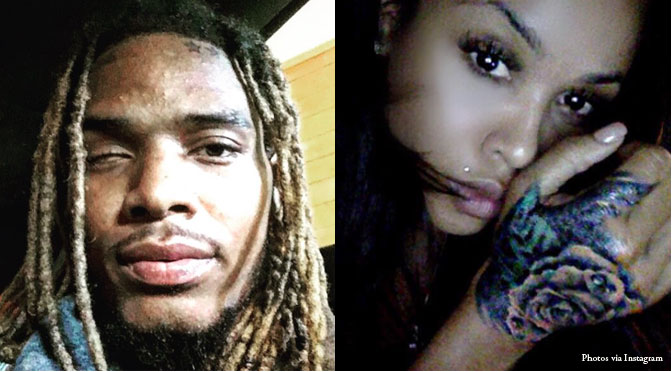 Fetty Wap is a rapper from New Jersey that’s risen to prominence over the past several years. Masika Kalysha is a reality star who appeared on the VH1 show Love and Hip Hop. The two apparently got together, and Masika got pregnant. Now normally, the love lives of celebrities aren’t of much interest. But their story is notable because Fetty Wap is apparently pressuring Masika to have an abortion.

We’re told they had an angry text exchange in which Masika told Fetty she believes abortion is murder … and he fired back, “You obviously don’t believe in condoms either.”

Our sources say Masika pleaded that she’d taken the Pill, but it didn’t work — and Fetty responded by telling Masika she’d be having the baby on her own. We’re told he texted, “I ain’t comin round helping yu none of that I’m lettin yu no now.”

So even though he is just as responsible for creating that new life as she is, he’s going to try to pressure her into an abortion and abandon his child. Real nice.

For her part, Masika seems to be staying strong, sending out a series of tweets expressing love to her preborn baby that are truly touching.

Anytime I get sad… I just think of you and it’s all ok ??

If you only knew the truth. I would defend myself but I’d rather protect my child. God gives his toughest battles to His strongest soldiers.

I’ve been through so much in my life. And all those battles prepared me to be strong just for you my little one. ? Momma’s got this ??

It’s fortunate that she’s strong enough to stand up and protect her child. The pro-abortion lobby doesn’t seem to be coming to her aid, though. Aren’t they supposed to be all for “choice”? Here we have a woman who is choosing to keep her baby, and yet the father of that baby is pressuring her to have an abortion. Isn’t that something they despise? Why aren’t they coming to her aid? When will they show up to give her support and show solidarity? The silence couldn’t possibly be because they only support “choice” when the woman chooses abortion, right?

It’s also pathetic that the only person who is being blamed for this accidental pregnancy is Masika. Somehow, women are the only ones expected to handle birth control. It takes two people to choose to have sex without a condom, yet it’s supposedly Masika’s fault. But that’s the pro-abortion world we live in: women are expected to make sure they don’t get pregnant, and if they do, to have an abortion right away. That’s today’s world of “choice.”

The truly sad thing is that, because of this societal attitude, Masika is hardly the only woman who gets pressured or coerced into abortions. It’s unfortunately very common — in fact, over half of all abortions in America are coerced. Women who are victims of domestic or sexual abuse are frequently forced into abortions so that their abusers can hide their crimes. Women that choose not to have an abortion can face serious violence for attempting to keep their babies. Other times, and far more common, women are coerced financially. This can come from both significant others and from the woman’s family, who threaten her with the loss of financial support and homelessness if she doesn’t have an abortion.

And yet, for all of their caterwauling about crisis pregnancy centers, how often does the pro-abortion lobby help these women? They don’t even speak up about the crisis of forced abortions, much less try to help them. But if you’re pregnant and are being pressured to have an abortion, don’t give up. There is help out there for you.

If you feel like you are being pressured to have an abortion, read this article to find help.