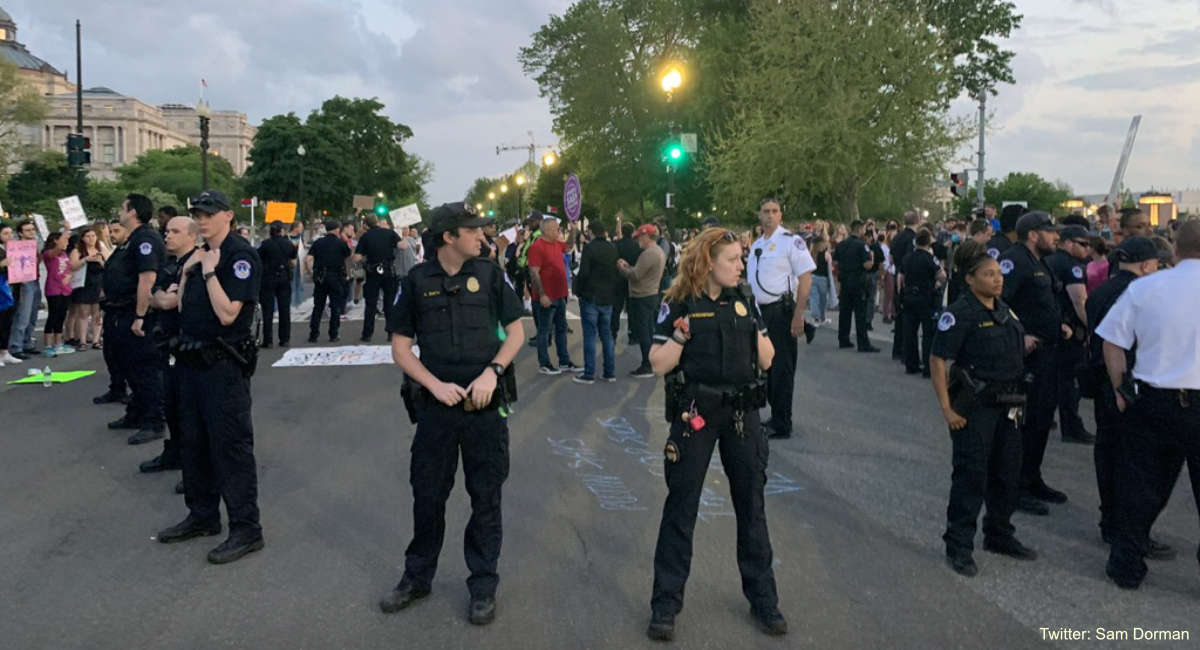 Tensions ran high at the Supreme Court on Wednesday as both sides of the abortion debate protested following the leaked opinion overruling Roe v. Wade.

At around 8 p.m. ET, pro-life protesters walked ​​into a large pro-abortion rally that took a circular formation with speakers in the middle. After pro-life protesters walked into the center, an apparent pro-abortion protester approached one of them – Bryan Kemper of Priests for Life – and appeared to try and take his sign. Footage shows the two individuals in an apparently heated exchange.

Police quickly formed a circular barrier around the handful of pro-life protesters who entered the rally.

Some from the rally questioned the police’s presence. At least one protester chanted “Cops and Klan go hand in hand.” Another individual yelled “the police protect the patriarchy.” Some of the attendees defended the police, suggesting they were just doing their jobs.

As more officers poured into the crowd, the rally moved to the other side of the barriers set up at the Court.

Pro aborts move to other side after police show up. As you can see at the end, lots of police. pic.twitter.com/aqgc098olQ

According to the Epoch Times, the officers ordered the pro-life protesters to leave. Among them was AJ Hurley — who leads Survivors of the Abortion Holocaust — and pro-life veteran Rev. Patrick Mahoney. A Facebook Live video from Hurley shows the confrontation from his perspective.

Later on Wednesday, Hurley later told Live Action News that he intended to file a lawsuit for alleged violations of his and other pro-lifers’ First Amendment rights. He said that in total, there were four of them involved in the confrontation. Capitol Police did not immediately respond to Live Action News’ request for comment.

Mahoney reportedly said, “I’ve been in D.C. 30 years. And I’ve never seen anything like this in 30 years.”

Another pro-life protester, Pastor Mark Lee Dickson of Right to Life of East Texas and founder of Sanctuary Cities for the Unborn, reportedly said: “We want to be over there to exercise our freedom of speech, our First Amendment rights, and the police are telling us that we cannot go where the others can go, and so they are treating us differently than they’re treating those.”

It has been difficult to find large groups of pro-life protesters at the Court outside of groups like Hurley’s and the Progressive Anti-Abortion Uprising. On Monday, a group of college students appeared to be praying the rosary at the Court while facing harassment from pro-abortion demonstrators.

Otherwise, the pro-abortion side appears to have showed up in much larger numbers.

Shortly after Politico reported on the draft opinion, protesters showed up to the Court on Monday and police started setting up barricades. As of Wednesday, there were barricades preventing protesters from reaching the steps of the Court. Other barricades divided the street in front of the Court (First St. SE)  into two sections, presumably for the two opposing sides on the issue.

After the pro-abortion rally moved to the other side of the street, the pro-lifers attempted to join them but were blocked by a large contingent of officers.

The Epoch Times reported that a female protester hit Dickson, who then stated, “Assault! Assault! She attacked me! She hit my head!” The ET noted:

“No,” she said. But as officers told her to stand up and prepared to arrest her, she said she had changed her mind. “Wait, wait! Can I change my mind?” she said in a panicked tone. “I would like to do that.”

Police brought the female pro-abortion protester close enough to talk with Dickson. The protester apologized“I apologize,” she said. But when Dickson asked her why she had hit him, she refused to answer.

“She apologized. Are we done here?” an officer said.

“But you just said I was free to go!” she said frantically.

Dickson then demanded the female protester’s arrest. But the police didn’t take her into custody. “We’ve not arrested her, so now we’ll have to get a warrant. We will still pursue it if you want to,” one officer said to Dickson.

“I wanted an explanation,” Dickson said. Then he tried to debate with the police.

“You’re playing a game. We don’t play this game,” an officer replied. “We abide by the law. You said whether you want to press charges, or you don’t.”

The men eventually left the protest.