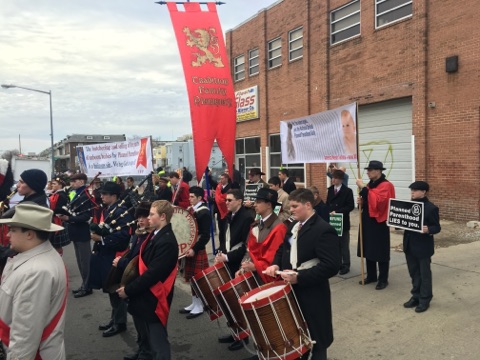 Earlier this week, Live Action News reported on #ProtestPP, a series of coordinated, pro-life demonstrations across the nation. Protests took place outside Planned Parenthood facilities nationwide, including in Washington, D.C.

Most of the protests and counter-protests occurred peacefully, but it appears that not all did. Students for Life of America reports that at the demonstration in Washington, D.C., police had to physically move Planned Parenthood supporters who blocked and even shoved pro-lifers.

The protest in Portland showcased even worse behavior on the part of pro-abortion demonstrators. Students for Life of America’s Northwest Regional Coordinator, Katie Lodjic, reported:

There were protesters there already when we drove up to the Planned Parenthood and they were yelling obscenities, swinging the long hard plastic jump-ropes around, and had signs that said “abort everyone,” “pussy bites back” “GOP: Grabbing of Pussies” (with a drawing of someone actually doing it) “your kids an a**hole,” “thank God for abortions” etc..

When we got out there with our signs, the protesters started intermingling with us and pushing us around. When the speakers started, they moved their jump ropes closer to us, and they were hitting us all in the backs with them, and shoving us forward.

Lodjic says police had to intervene against ridiculous behavior by pro-aborts in Portland, and claims that supporters of Planned Parenthood grabbed pro-life brochures and threw them away.

In a livestreamed video taken at the protest in St. Paul, a Planned Parenthood supporter can clearly be seen grabbing at the pro-lifer’s phone. The pro-abortion demonstrator is carrying a “keep your laws off my body” sign. Perhaps “keep your hands off my phone” would be a more relevant sign for next year.

Mary Alice Carter, interim vice president of Planned Parenthood Federation of America, tried to defend the abortion corporation’s public image against the crowds of pro-lifers seeking the defunding of the abortion giant.

“Patients don’t go to Planned Parenthood health centers to make a political statement — they go to receive quality care from a provider they know and trust,” said Carter. “That’s what we’re focused on today and every day.”

Sadly for Carter, the world is now aware that what some Planned Parenthood staff are focused on “today and every day” is actually pizza parties after abortions.

Despite some unpleasant encounters with Planned Parenthood supporters seeking to silence pro-lifers, many protesters feel that #ProtestPP was a nationwide success for the pro-life movement. Terrisa Lopez of Secular Pro-Life, who attended the San Francisco protest, reports:

Overall, it was intense to say the least.  I did several local media interviews, and had some great interactions. We definitely broke some stereotypes. It was exhilarating to see such a sizable counter protest and I think it’s an indication that the pro-choice side is done ignoring us. We are a real threat now, and once we successfully defund Planned Parenthood, and get abortion money out of the political system, hopefully then we will be able to have an honest discussion in this country about abortion.