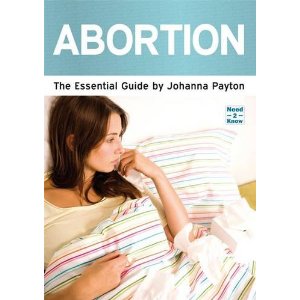 Abortion: The Essential Guide is a publication written for women who are considering abortion. It purports to be unbiased, but it sugar coats much of the abortion procedure. It also tries to prevent women from getting the pro-life message. The book says:

Some antiabortion (or “pro-life”) groups publish books and websites to influence women’s decisions, claiming to offer information …There are also groups describing themselves as “counseling services,” which aim to prevent women from choosing abortion.

Groups opposed to abortion may try to influence a woman’s decision using:

Illustrations of fetuses or abortions taking place – an impartial group will never show you images unless you ask.…

Fetal images of late pregnancy, suggesting this is what early pregnancy looks like.

In fact, most abortion clinics will not show images at all – even if the woman asks to see them.  They often refuse to show her the ultrasound images of her baby.   They have also been known to lie about the development of the baby.  In fact, you can see abortion clinic workers’ deceit in action on Live Action’s undercover videos here.

Shouldn’t a woman have all the relevant information about her pregnancy before she decides to have an abortion? Is it better for her to learn about the development of her unborn baby after her abortion rather than before?

There have been many stories of women who had an abortion thinking the unborn baby was only a collection of cells, who then later found out the truth and suffered shock, guilt, and horror about what they agreed to. One psychologist who was worked with many postabortion women said:

I have seen hundreds of patients in my office who have had abortions and were just lied to by the abortion counselor. Namely ‘This is less painful than having a tooth removed. It is not a baby.’ Afterwards, the woman sees Life Magazine and breaks down and goes into a major depression.

Also, pro-lifers don’t have to lie about the development of the unborn baby. The baby is remarkably developed very early in pregnancy. Here you can see a video of baby at a little over seven weeks moving around in the womb. You can clearly see little hands and feet complete with fingers and toes. You can see what a baby this age looks like after an abortion here (warning: graphic)

So this book, this guide for women, does not give any of this information to women seeking abortion, and in fact discourages them from finding it on their own. Instead, this is what the author feels a woman should know:

Vacuum aspiration (or suction termination) is usually used from 7 to 15 weeks of pregnancy, and involves using gentle suction to remove the foetus from the womb.

And of a late-term abortion:

Surgical dilation and evacuation (D&E) is carried out under general anesthetic and may be used between 15 and 24 weeks of pregnancy. The cervix is gently stretched and dilated (opened) so that suction “and sometimes forceps, depending on the stage of pregnancy) can be used to remove the foetus.

The procedure usually takes between 10 – 20 minutes. If you’re healthy and there are no complications, you should be able to go home the same day.

Ah yes, “gentle” abortion, which pulls the baby’s arms and legs from her body with a powerful suction machine if it doesn’t dismember the child manually with forceps.

This is the kind of information that is out there aimed at women considering abortion. Is it any surprise that so many women go into their abortions having no idea how brutal they are for their unborn babies?

Pro-lifers must keep telling the truth about abortion, both to abortion minded women and to the public. We need to counter the sugarcoated picture that women get from many sources aimed at “helping” them.