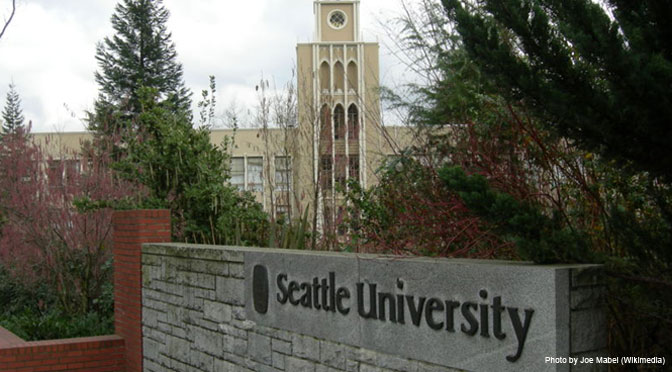 A Catholic University has rescheduled an event featuring a Planned Parenthood speaker after pro-lifers expressed outrage over the event as well as the way it was promoted.

According to the Cardinal Newman Society, the Seattle Nursing Students for Sexual and Reproductive Justice (an unofficial student group at Seattle University) planned to host an “Catholicism and Full Spectrum Reproductive Healthcare: One Provider’s Perspective”  in late February. After doing some research, the Society discovered the speaker to be Dr. Sara Pentlicky, an abortionist from Planned Parenthood of the Great Northwest, who was to share “her personal story about growing up Catholic and her experience offering full spectrum reproductive care.”

According to reports, Pentlicky had planned to discuss her personal journey as a Catholic who became a “reproductive health care provider” (a.k.a. abortionist) but claimed she was not going to speak as a representative for Planned Parenthood.

The event angered several Catholic pro-life leaders. John Pisciotta, director of Pro-life Waco and founder of Hometown Pro-life Action Facebook page, says the promotional flyers for the event were “blasphemous” because they showed a rosary with an IUD in place of a crucifix. Janet Morana, executive director of Priests for Life, told the Newman Society, “It’s hard to believe that this sacrilegious flyer is coming from a Catholic university, and that a Planned Parenthood speaker has been invited to address students. Students who choose Catholic colleges, and the parents who help pay the tuition, are looking for an education that is consistent with their faith.”

Students for Life member and junior Theology major, Gabriela Johnson told the Seattle Spectator, “Right away I was offended by it because I myself am Catholic and the rosary is something we hold to be sacred.”

Pisciotta told Live Action News that after contacting the university, he received a response which he called “a partial retrenchment” telling him that the pro-abortion event had been postponed and the flyers were removed from campus.

The e-mail from Dean Kristen M. Swanson sent to Pisciotta was dated the eve of the event and contained a written response from Stephen V. Sundorg, S.J., president of Seattle University which read in part:

The promotional materials associated with this event were outrageous and offensive to the Catholic character of our university. The way the event was promoted is not acceptable as it denigrates Catholicism and the materials should have never been approved. The event will not be taking place this evening and the students involved in the planning will be looking to include additional viewpoints and perspectives before seeking to reschedule it. But the president’s response to Pisciotta contradicts one he allegedly sent to the Seattle Spectator which reports that, “Contrary to these requests, in an e-mail statement to the Spectator, Sundborg said that the group would not be required to include more perspectives. Hirsch also said that those requests were merely recommendations.”

Pisciotta told Live Action News that the response, although appreciated, was not enough. He said he was disappointed that the president’s response indicated that the Catholic University still intended to allow the pro-abortion event to take place:

He admitted the flyer design was approved at some level of this “Catholic” university. The Jesuit president plans to help the nursing students deliver the event promoting abortifacient birth control in opposition to the moral standards of the Catholic Church.

The Seattle Spectator described the outrage the school received from Catholics and pro-lifers around the country as an “avalanche of negative response.” In addition, a spokesperson for NSSRH told the paper that campus administration was receiving calls for their group to now “be expelled” and “disbanded” as well as prohibited from ever hosting any future events on campus.

Whether or not the university will host this abortionist after all remains to be seen.