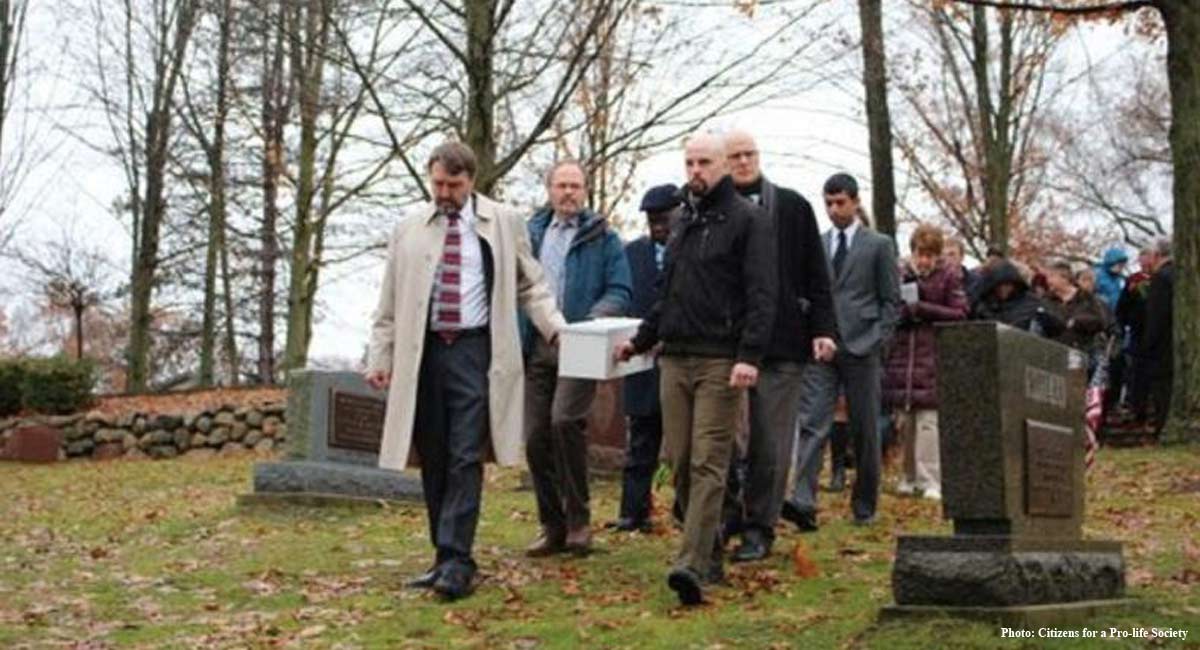 (Life Site News) More than 150 mourners gathered Saturday to honor an anonymous aborted child, the last of 15 babies found in the trunk of Michigan abortionist Michael Roth’s car in September 2015.

Fourteen of the aborted children were laid to rest on November 3 at Holy Sepulchre Cemetery in Southfield, Michigan.

Local pro-lifers in Livingston County had asked to bury one of the 15 aborted children, known as the “Trunk Abortionist” babies, naming the child Michael Gabrielle. The baby, estimated to be seven weeks old, was buried in solemn funeral rites on Saturday, November 24, after Mass at Holy Spirit Parish in Brighton.

“Today we buried an unwanted human being,” said Monica Migliorino Miller, director of Citizens for a Pro-Life Society (CPLS).

“This tiny person is just one of sixty million who have been put to death with the sanction of the unjust law of Roe v. Wade,” she said. “Indeed this little child stands for all those who are victims of violence in our land.”

CPLS had worked for two years to obtain the babies’ remains for burial. The bodies were eventually released by the Oakland County Medical Examiner’s Office to the Borek-Jennings Funeral Home in Hamburg, Michigan in August.

Roth had been committing abortions out of the trunk of his car, drove around with baby parts

In September 2015 the remains of the 15 aborted babies were discovered in the trunk of the car of Michigan abortionist Michael Roth by the West Bloomfield police department.

CPLS ran down specifics of how the Trunk Abortionist babies were discovered in a statement on Michael Gabrielle’s burial.

Roth had lost the lease in the Novi, Michigan building where he ran an abortion facility for more than 20 years in May 2014. According to local pro-lifers, Roth had a history of lawsuits, and Attorney General violations, including doing at-home abortions in the 1990’s, as well as sanctions placed on him by the State of Michigan’s Licensing and Regulatory Affairs (LARA).

Over the next few months, Roth attempted to rent other office space to restart his abortion practice.

Local pro-life activists continued on his trail, twice succeeding in influencing landlords not to rent to the abortionist.

Late in 2015, Roth went on to rent office space in Farmington Hills, but it appears his lease did not permit him to do abortions, and he would eventually close up that office as well.

In September 2015, Roth was involved in a car accident in his hometown of West Bloomfield, where he struck and seriously injured a pedestrian. As a consequence, his car was impounded by local law enforcement.

Roth asked the West Bloomfield police if he could retrieve personal belongings that were inside the vehicle. The police accommodated the request.

When they opened the car, they also discovered Roth was illegally in possession of medications related to abortion procedures.

READ: Gosnell is not alone: Why we need more investigations and stricter regulations

The search would also lead to the discovery of the remains of the 15 aborted children.

It appeared that Roth had been conducting abortions out of the trunk of his car.

Following an investigation, Roth was eventually convicted last year of three counts of larceny from a building connected to the illegal possession of narcotics. He was sentenced to 18 months probation, received a $798 fine, and his medical license was suspended by the State of Michigan Medical Board.

Miller said since Roth was a licensed physician, the Assistant Attorney General handling the case lacked confidence in achieving a conviction for Roth apparently performing abortions outside of a clinic setting.

The babies were held as evidence by the Oakland County Medical Examiner’s office, and after dozens of phone calls from Miller and letters of request, the aborted children were released to the pro-life group.

Miller responded to the Oakland County Medical Examiner having said in an initial analysis that the jars contained human tissue described as “remnants of performed medical procedures,” and “products of conception,” but not fetuses.

“I don’t know how carefully the medical examiner looked in those specimen jars,” she said, “but they did contain real identifiable human remains.”

“I looked in the jars,” said Miller. “I saw the tiny bodies myself—their arms, legs, feet, spinal columns—all there. These are real human beings, they lived once, they were put to death, treated with total disrespect—and now these unwanted people will at least be given a humane and dignified burial.”

“In the Christian religion there are seven corporal works of mercy,” she added. “The last work of mercy is to bury the dead—but it will be the first work of mercy these unborn children will ever know on this earth.”

A granite marker will be installed at the Holy Spirit Cemetery, engraved with the name of Michael-Gabrielle, the Livingston Daily Press reports, including a designation of the child as a victim of abortion, and a verse from the book of Revelation: “He will wipe every tear from their eyes.”

“He or she has no family and so we have become the family for this unknown person,” Miller said.

“When we placed his or her body in the earth it was the only work of mercy this aborted human will ever know,” she said. “And when we stand at the grave we commit ourselves to fight for a culture of life and an end to abortion.”

Editor’s Note: This article was published at Life Site News on November 30, 2018, and is reprinted here with permission.