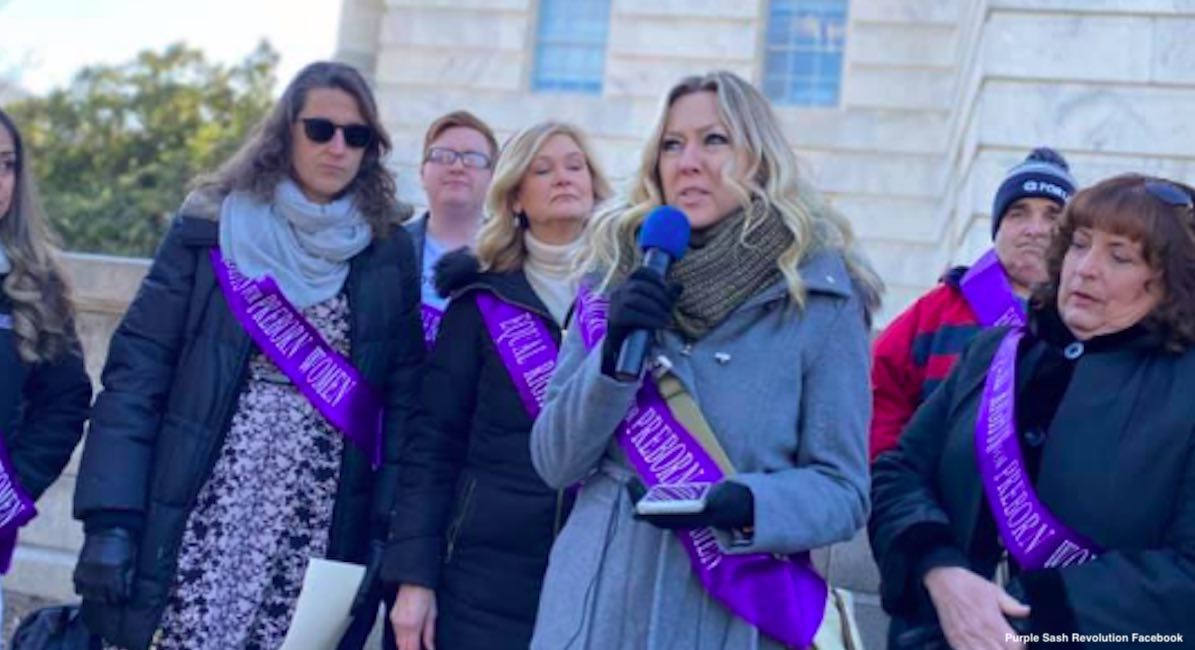 Pro-life activists known as the #PurpleSashRevolution staged a sit-in at the office of Speaker of the House, Rep. Nancy Pelosi (D-CA) on Wednesday, the 47th anniversary of Roe v. Wade, the Supreme Court decision that legalized abortion in the United States. Their goal was to bring awareness to a bill meant to protect abortion survivors and to inspire Pelosi to allow Congress to vote on the bill. Nine of the activists were arrested by Capitol police for their efforts.

The peaceful sit-in was an initiative of Stanton Healthcare’s new Stanton Public Policy Center. Stanton Health Care is a group of pro-life women’s health centers, and the purple sashes are worn in solidarity with the Suffragists, who also wore purple sashes during their efforts to gain the right to vote for women. The first Suffragists of the U.S. were pro-life. The protest at Pelosi’s office is said to be the Purple Sash Revolution’s first official event.

The majority of pro-lifers present at Pelosi’s office appear to have been women, and they prayed inside her office before moving to the hallway where they sang “Amazing Grace,” and the Rev. Patrick Mahoney of the Christian Defense Coalition led them in prayer, according to LifeSiteNews. That’s when police stepped in.

“We were inside Nancy Pelosi’s office, we left, a number of people knelt down in front of her office door, and then the capitol police asked us to leave,” said Doug Mainwaring of LifeSiteNews at the scene. “So most of us were herded out to the far end of the hallway, although some remain in front of the Speaker’s office…they’ve been threatened to be arrested by police.”

The Purple Sash Revolution told LifeNews.com that it is “calling for an end to infanticide in America.” The Born Alive Abortion Survivors Protection Act aims to prevent infanticide of abortion survivors by ensuring proper medical care is provided to any child who survives an abortion. Pro-lifers in Congress want the bill to go to a vote, but pro-abortion House members continue to block it.

“We are going to Speaker Pelosi’s office to call for an end to infanticide and demand she allow a vote on protecting children born alive from late-term abortions,” Brandi Swindell of Stanton Public Policy told LifeNews. “It is unconscionable that Speaker Pelosi is refusing to allow a vote on this critical human rights issue.”

National polling consistently shows that Americans, even those who consider themselves pro-choice, want restrictions on abortion and want abortion survivors to be protected.

“These little babies are fighting to survive an attempt for their life to be taken out, and then we give abortionists another opportunity to kill that baby? It’s wrong,” said Swindell. “It is not who we are as a society. It is barbaric. And so all of us here today, we represent the millions of Americans that reject abortion or reject late-term abortion. And so today was a moment of strength, it was a moment of power, it was a moment of speaking truth to power.”

Pelosi was not present in her office at the time of the sit-in.