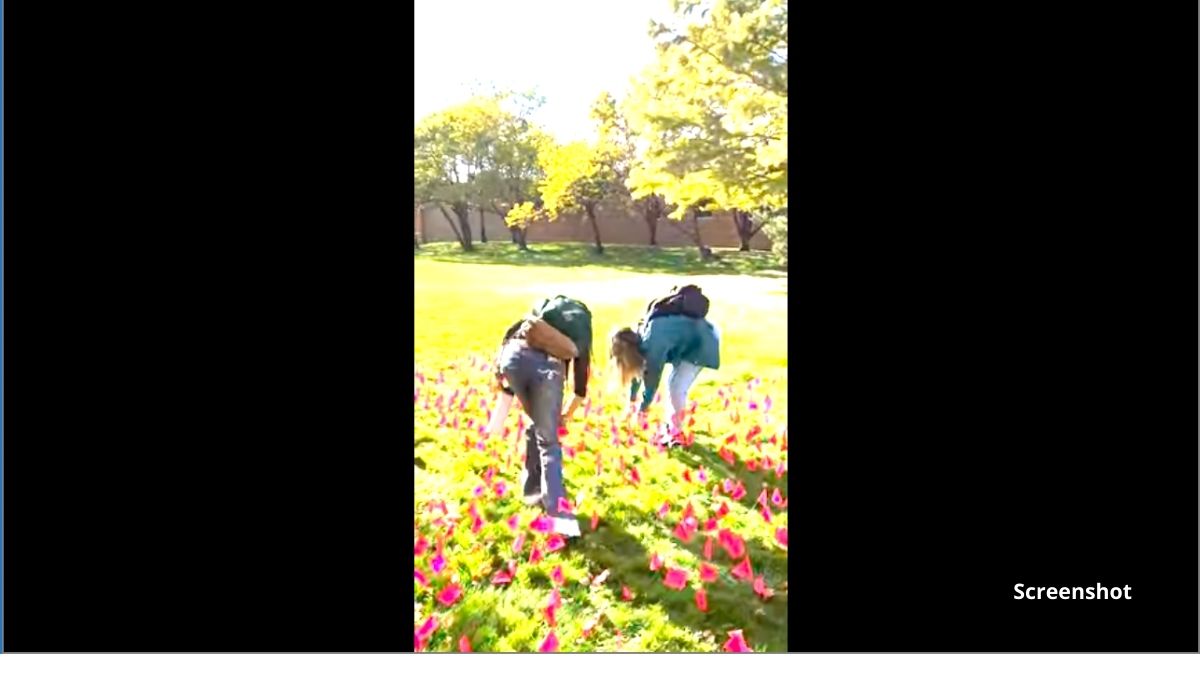 Vandals have defaced a pro-life display on yet another college campus, this time at Saint Louis University (SLU), a Catholic institution. The vandalism is the latest in a recent spate of attacks against pro-life displays on university campuses around the country.

On November 8, the Students for Life Chapter at SLU had set up a memorial with 1,000 flags arranged in the shape of a cross. Each flag represented 800 abortions, to commemorate a total of 800,000 abortions. Students for Life reports that shortly afterward, one of its members noticed that the signs placed in front of the display had been kicked over. An hour later, they were gone completely.

Later that afternoon, SLU student Nick Baker saw two women vandalizing the display. He approached them and started filming. “So uh… you just love disrespecting women?” one of them said. “You can go to hell, ” a woman told him. “You’re a little b*tch.”

Later that evening, more students were seen tearing the crosses out of the ground. Students for Life reports that its members removed the crosses to prevent further vandalism, and awoke the next day to find several pro-abortion signs placed around campus.

Baker told Fox News that two days after the display was vandalized he was approached by one of the women he had filmed, and she continued to berate him.

“You’re a disgusting misogynist, and karma is going to f***ing get you,” she said. “You’ll see that when you die, and hopefully you f***ing go to hell. You can see my pictures, you can see how pretty I am, how good of a life I have. And what do you have? You’re a f***ing loser,” she added. “You just really enjoy your life, cause I’ll enjoy mine. And I’ll f***ing keep killing babies.”

READ: The abortion supporter you meet today could be pro-life someday. Be kind.

Students for Life Missouri-Arkansas Regional Coordinator Lucy Gonzalez is an SLU alum. She spoke of how this is unfortunately not the first time pro-life displays have been vandalized on campus. “Every year during my time as an SLU student, our annual Cemetery of the Innocents display was vandalized. One year, our entire display of 350+ wooden crosses that we staked into the ground were completely stolen,” she said.