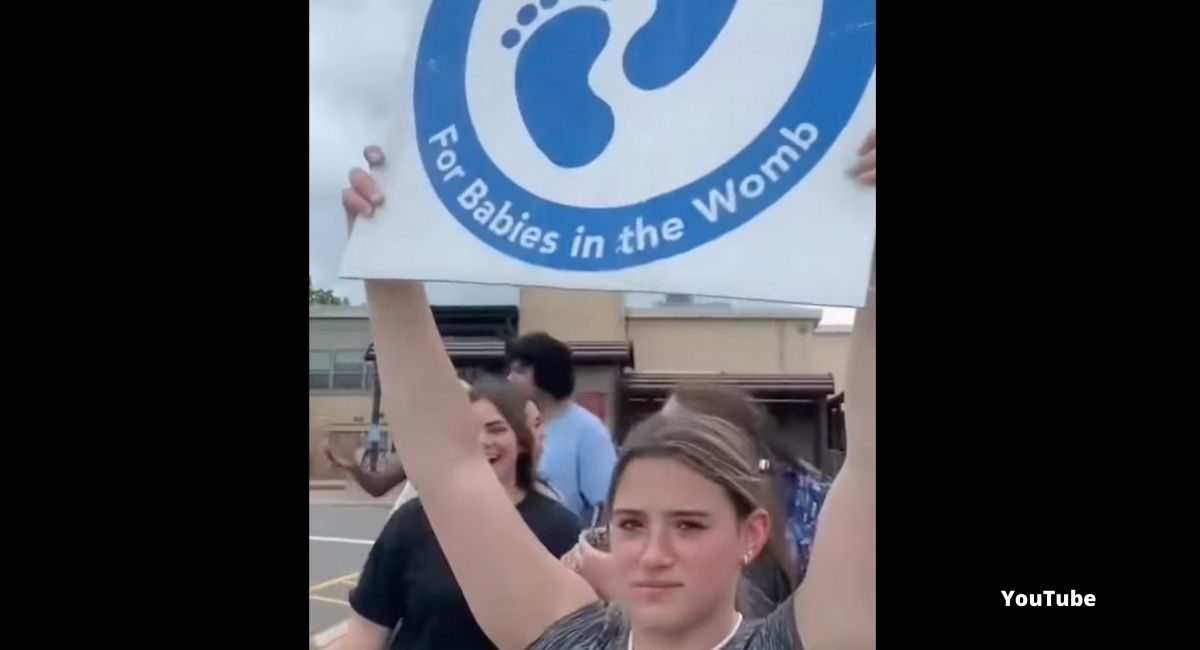 The father of a 16-year-old pro-life student at Hunterdon Central Regional High School in New Jersey is speaking out about the attack on his daughter by an angry mob of pro-abortion students on campus, simply because she was holding up a pro-life sign.

Nichole Pagano and her sister, Vanessa, 18, saw the crowd of students holding a pro-abortion rally, and made an impromptu decision to stand for life. Nichole wondered if the pro-abortion students even understood what abortion entails. In an interview with Live Action News, the girls’ father, Michael Pagano, said neither of his daughters is an activist, though they believe in the sanctity of human life. The girls decided to bring the sign with them to school to represent the other side of the debate, but neither of them had any idea what was going to happen. When they got to their car, Vanessa remembered the sign and suggested they go over with it; Nichole volunteered to hold it.

“She didn’t say a word, my daughter,” Pagano said. “She was holding the sign, and she got attacked by all these kids. There were 200 kids there, and eventually, it got bigger and bigger. There was a lot of chaos. Teachers are there, superintendents are there — people were there. They knew. They knew about it.”

The girls were attacked both verbally and physically, with Vanessa trying to get the students off of her younger sister.

“Multiple times, they ripped the sign out of [Nichole’s] hands,” he said. “They had to go back and get it. My daughter just kept going after it. I couldn’t believe she did that; she would not give up. One time, they were standing on a box, and she went up there, and just quietly held the sign. Another girl came up, and then all of a sudden, someone pulled her from behind. She’s athletic, so she landed OK, but it was a chaotic, mob mentality, screaming. At one point, they were chanting, ‘F*** that b***! F*** that b***!’ And there was nobody who was helping.”

Pagano said one of the most shocking things for his daughters was how many students were there to violently protest in favor of abortion. In an interview with the National Catholic Register, Nichole described the insanity of the event.

“There’s like 200 kids there and then all of a sudden they come surrounding us — mostly trying to come at me and attack me because I had the sign — and then they came at me all up in my face, verbally screaming at me, and physically even grabbed me and ripped me down,” she said. Afterward, she had scratches on her arms and legs, and a sore shoulder from having her arms pulled by the pro-abortion students.

And meanwhile, despite the presence of teachers and administrators, no one helped Nichole with the exception of her older sister. “When I got there, I saw teachers’ faces, and they were angry at my daughters,” Pagano said. “And I said to my daughter, ‘What’s with that teacher?’ And she said, ‘Oh yeah, she was giving me dirty looks.’ For them to have all those signs made, it was very organized for [the administration] to not know about this.”

The Paganos filed a report with the police department, and National Catholic Register said seven students were suspended. But Pagano said there has largely been silence from the school and the police department, even as threats are seemingly continuing. Nichole spoke publicly at the May 16 board meeting about the “hurtful” events that occurred that day and the school board did address the assaults during a meeting on May 23, but parents were not satisfied with the board’s actions.

“We had a big 16th birthday party planned for her at a place in town,” Pagano explained. “A lot of kids started canceling on her. Kids didn’t show up. She met some other girls that supported her — not many — but she couldn’t believe how many backed out, even guys. So many backed out because of what she did on Monday, and some of those girls sent out a post with my daughter’s invitation on it, saying, ‘What are you guys doing on Saturday? Let’s go and protest at her party!'”

The family contacted the police again, and the party still ended up being a good time for Nichole. But it was a harsh lesson for the pro-life student, who has managed to handle the stressful situation with grace and dignity.

“The way they stood their ground, it was amazing. I was proud of them,” Pagano said, explaining that her training as a competitive gymnast has helped Nichole handle the pressure, even as it continues to follow her. “Someone put out a Snapchat about her. I went and picked her up a little early that day because she was afraid… kids weren’t talking to her. That week at school, it was silence. Even kids she thought were friends.”

Ultimately, Pagano — and Nichole — said it boils down to something beyond activism, and that’s merely doing the right thing, no matter the consequences. “You’ve got to just do what your heart says and what you believe in. You’ve got to do what’s right,” Nichole told the Register. “Even if it’s sometimes hard to do, you go to do it to make a stand and make a point.”