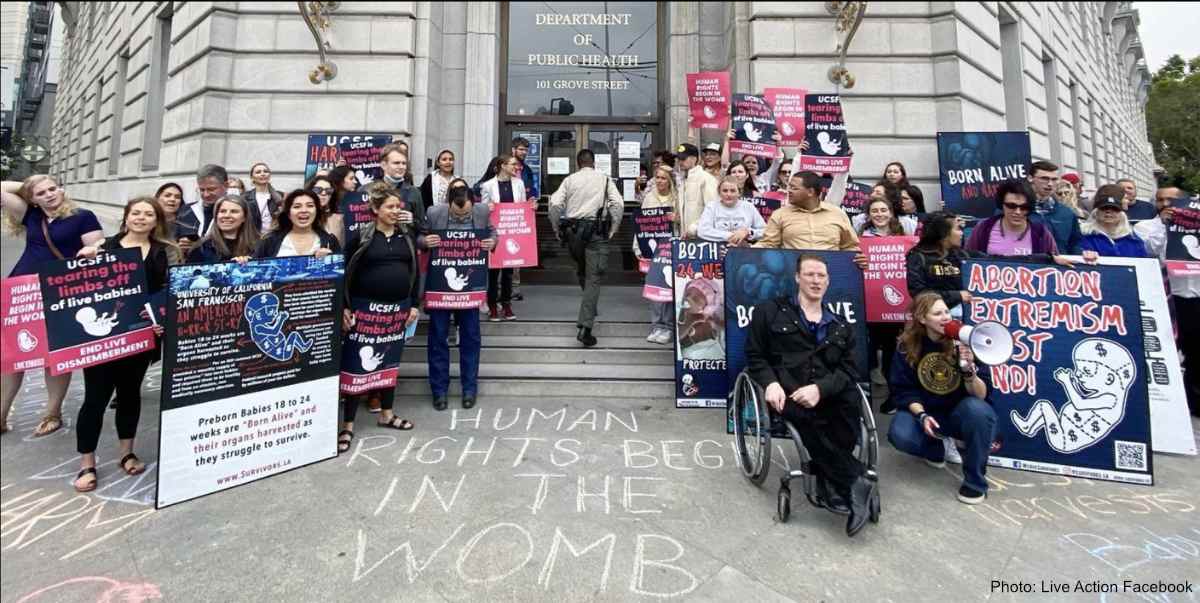 The San Francisco Department of Public Health and UCSF jointly operate Zuckerberg San Francisco General Hospital; one of the two Women’s Options Center abortion facilities from which fetal organs are procured after abortions is located at this hospital.

On May 6, 2021, the Executive Coordinator from Pro-Life San Francisco placed a phone call to the City of San Francisco’s 311 hotline, one function of which is to report municipal problems. This was done to establish communication with the Department of Public Health regarding the fetal tissue and organ harvesting and experimentation being executed at UCSF. He received a tracking number via email to chart the progress of his complaint.

The following day, coalition activists from Pro-Life San Francisco and Survivors of the Abortion Holocaust hand-delivered a letter to the office of Dr. Grant Colfax, Director of Health for the City and County of San Francisco. The letter addressed their grievances against UCSF’s fetal tissue and organ harvesting and experimentation practices and requested a response. To date, no response has been received or enacted. Meanwhile, the status of the 311 complaint remains unresolved, as well.

The protest on July 13 was an organized demonstration to demand that the City act on these complaints and to object to its collaboration with UCSF in unethical fetal tissue procurement and experimentation activities, which are taxpayer-funded. Activists carrying signs with messages such as “Human Rights Begin in the Womb,” and “End Live Dismemberment” gathered at the Department of Public Health, where some chalked pro-life messages on the sidewalk outside and acted as witnesses to the public, while others went inside to confront SFDPH staff with their grievances.

When activists reached the third floor where the office of the Public Health Director is located, SFDPH staff had prematurely locked their office doors, pre-empting a face-to-face conversation regarding grievances. Nonetheless, the activists could see staff moving about inside the offices through the frosted glass windows, and they occupied the marble hallway outside, chanting slogans such as “Live dismemberment must end,” and “UCSF, we know what you do” for over two hours. Law enforcement arrived about halfway through this period, merely to advise the activists’ legal counsel that they would clear the building promptly at 5:00 p.m. Activists left peacefully at that time, and no arrests were made.

AJ Hurley, Executive Director of Survivors of the Abortion Holocaust, had this to say about the event, which was livestreamed on Live Action’s Facebook page:

For the past two years, Survivors has been working tirelessly to expose what generations to come will think of as the age of the most barbaric and senseless human rights violations of all time.  … We have exposed a system where the most at-risk, including minorities and the economically disenfranchised, have been relegated to extinction. The products of their murder are harvested … in the name of “progress.” … [T]he San Francisco Department of Public Health and UCSF refuse to answer a litany of our inquiries. The time for silence is over, and Tuesday we … raised our voices and demanded answers.

Hurley was arrested while peacefully holding signs and distributing literature with Survivors on the UCSF campus two days after the July 13 protest at the Department of Public Health. This is not the first time members of Survivors of the Abortion Holocaust have been arrested while peacefully protesting on the UCSF campus, which is public property. 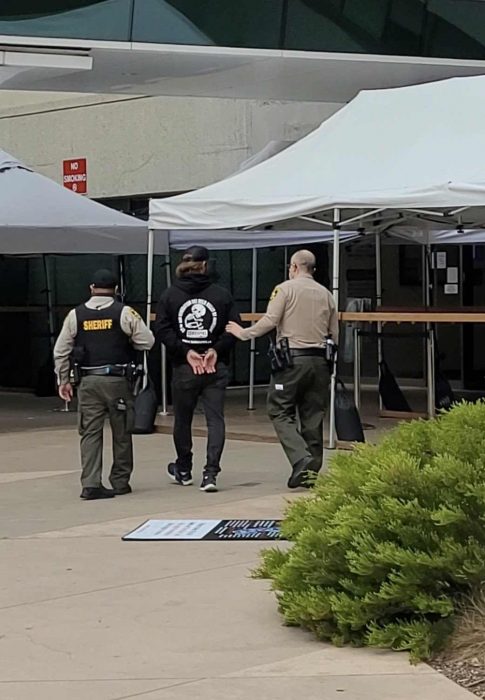 The community is tired of hearing about UCSF’s horrifying practices week after week. The fact is, there are ethical alternatives, and we can’t turn a blind eye to unjust practices in the name of “good.”

Pro-Life San Francisco cares deeply about finding cures to diseases that have long affected our community, but to replace one tragedy with another intentional one does nothing to heal the people of San Francisco. We will not stop calling on every relevant authority until they put an end to unethical research facilitated by UCSF.

Both groups have been coordinating efforts to sway the University of California’s Board of Regents into halting UCSF’s fetal tissue practices by commenting at the board’s regularly-scheduled meetings for the past two years. The next opportunity for public comment at a Board of Regents meeting is July 21, 2021. More information about the event, and how to participate, can be found on Pro-Life San Francisco’s Facebook event posting.