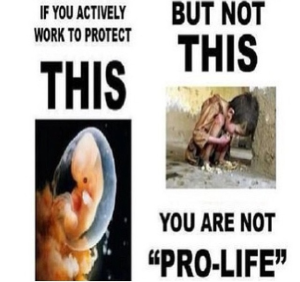 If only liberals realized that signs like this work both ways…

While Daniel Smyth takes fellow libertarians to task for disregarding unborn babies’ liberty, a leader on the other end of the political spectrum is challenging his ideological brethren on the same point. In an editorial for CNN, Catholics in Alliance for the Common Good senior fellow Christopher Hale presents the case for “why progressives should oppose abortion” — that “protecting the lives of unborn children should be at the heart of the progressive agenda”:

[D]eeply rooted in the history of human society is the belief that every human being has dignity and the right to live in that dignity.

As progressives, we further believe that the government plays a crucial role in protecting that dignity, especially among those who face adverse societal conditions: the poor, the unemployed, the elderly, the uninsured, single parents, gay and lesbians — and yes — the unborn.

This radical inclusivity is at the heart of the progressive tradition. And while it sounds romantic, in practice it isn’t easy […]

[B]y advocating policies that create a false dichotomy between supporting pregnant women and protecting the lives of unborn children, they are willful participants.

These policies are rooted in a social Darwinism that pits people against each other in the pursuit of living. In short, it is the belief that if the child lives, the woman loses. But in reality, we all lose in a country where the death of an innocent child is considered a measure of progress and freedom.

The truth hurts, but liberals need to hear it. One of progressivism’s — aka modern liberalism’s — greatest ironies is that abortion on demand is nigh impossible to reconcile with the rest of progressive theory. As I’ve written before here and elsewhere, the “right to choose” is the glaring exception to nearly everything the left believes.

In economics, health care, education, gun use, environmental regulation, and even religious faith and political speech, progressives make the individual’s choices and desires subservient to what they consider the greater good of those in need. Despite the rising popularity of the absolutist “bodily autonomy” defense these days, more often than not it’s the only form of autonomy its proponents recognize.

To believe in involuntary wealth redistribution for the poor and sick, forced subsidization of contraceptives, and compulsory participation in private ceremonies (just to name a few) — while not believing that a mother owes the neediest and most helpless of all the simple mercy of letting him or her live — is a sick joke. This “radically inclusive” ideology is “constantly looking” for new pockets of society the rest of us must sacrifice to assist, but thinks the deepest possible familial bond is meaningless.

It’s commendable that Hale dares to call this hypocrisy out. Unfortunately, he squanders its impact by spending the next few paragraphs accusing abortion foes of being anti-life in other ways:

The Republican leaders in Congress might imagine themselves to be pro-life, but their policies and their actions reveal most of them to simply be pro-birth.

To be authentically pro-life, you cannot simply support a child’s right to be born, but also the rights of the woman bearing the child to significant support from her community and her government.

In their three years in leadership Republicans in the House have passed bill after bill that significantly cuts the social framework that protects both mother and child throughout the early formative years of a child’s life.

In reality, these “lines in the sand,” as Hale calls them, are less about human dignity than they are about erecting a tired and clichéd false equivalence that exempts him and his fellow progressives from having to actually own the implications of recognizing abortion’s evil. They ought, for instance, to ask how Hale could, in good conscience, “lead national Catholic outreach” for the reelection of the most callously and radically pro-abortion president America has ever seen.

For the sake of argument, let’s put aside the fact that the spending cuts Republicans seek always turn out to be far less draconian than advertised when put in context of how much the federal government actually spends (so much that, for all the fear-mongering liberals have done about Paul Ryan’s budget ideas, his cuts would still take another 26 years to balance the budget), and that the GOP leadership is far more accepting of government’s current size than grassroots conservatives.

Let’s pretend Republicans actually are on the verge of transforming the welfare state in exactly the way the theory masters at the Heritage Foundation and Cato Institute want. Would that destroy “the social framework that protects both mother and child throughout the early formative years of a child’s life”?

Far from it. Conservatives don’t seek to eliminate public aid, but to return control of it to the states, where it belongs; purge the vast corruption and unsustainable waste from the system; and reform its incentives toward recipients becoming independent.

Finally, forget the last few paragraphs. Even if we were to concede Hale’s caricature of fiscal conservatism in its entirety, in what moral universe would negligence toward economic hardship be equivalent to willfully protecting and actively promoting the direct murder of over a million innocent children every year? It would be like saying parents whose teenager steals a beer are just as bad as parents who intentionally give their kid heroin.

Christopher Hale declares that “it doesn’t work” to “be pro-life and anti-government,” or “pro-life and anti-woman.” Perhaps, but it’s even more futile to be pro-life while anti-truth, no matter how uncomfortable its implications. Of course, you don’t have to be fiscally conservative to join the pro-life cause – but it’s hard to forge lasting partnerships while caricaturing the other views of your would-be allies.