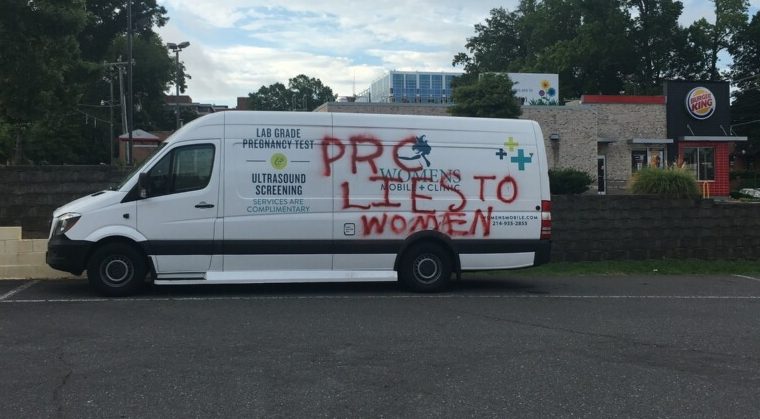 A Human Coalition mobile care clinic was vandalized last week after a pro-abortion webinar criticized the group. One of the Human Coalition vans was parked outside a new Planned Parenthood facility in Charlotte, North Carolina, offering free pregnancy tests and ultrasounds to women all week. Sometime between Thursday evening and Friday morning, the van was vandalized.

Possibly by coincidence, the pro-abortion organization Reproaction hosted a webinar slamming Human Coalition Thursday night. Erin Matson, the founder of Reproaction, notably argued that women don’t deserve better than abortion. The webinar included Amy Littlefield, a reporter for the pro-abortion Rewire.news (formerly RH Reality Check), and Calla Hayes, an abortion facility director who notoriously claimed that preborn children aren’t human beings because a person can’t be legally added to a will until 30 days after they’re born. In the webinar, Human Coalition was attacked as having “fake clinics” and was described as a “public health disaster,” with “stigma-peddling” and “anti-abortion trickery.”

The next morning, the mobile care clinic was found with “PRC lies to women” written on it in graffiti.

Interestingly, the same day the unit was vandalized, a former client sent a card to Human Coalition staff, thanking them for giving her hope and resources. The card was provided exclusively to Live Action News. 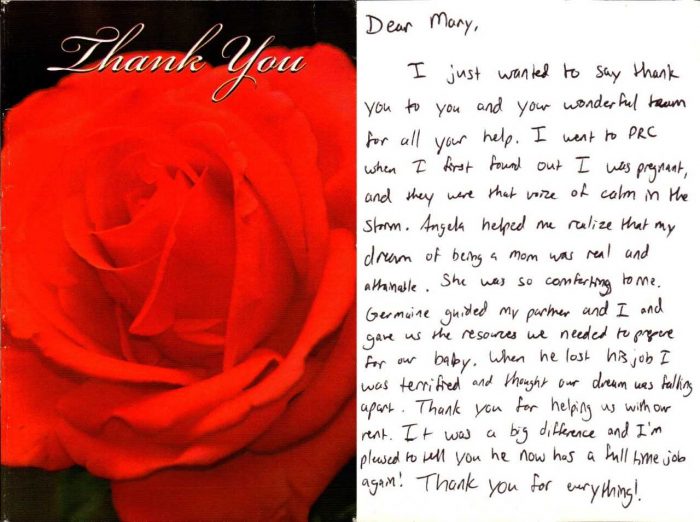 I just wanted to say thank you to you and your wonderful team for all your help. I went to PRC when I first found out I was pregnant, and they were that voice of calm in a storm. Angela helped me realize that my dream of being a mom was real and attainable. She was so comforting to me. Germaine guided my partner and I and gave us the resources we needed to prepare for our baby. When he lost his job I was terrified and thought our dream was falling apart. Thank you for helping us with our rent. It was a big difference and I’m pleased to tell you he now has a full-time job again! Thank you for everything.

In a statement to Live Action News, Lauren Enriquez, public relations manager for Human Coalition, said they will not stop trying to help women and children in crisis. “Human Coalition serves families and rescue children in Charlotte, where thousands of children are killed in abortion each year and multiple abortion facilities disproportionately target minority children for extermination,” she said. “In the face of this injustice, we extend compassionate care and tangible resources to Charlotte families, and we are grateful for the prayers and support of the community in sustaining this work. We are not deterred by pro-abortion opposition.”

Human Coalition has made a difference in their clients’ lives, and while Reproaction accuses Human Coalition of being “fake” and using “trickery,” they might be better off looking within their own industry.

“The expansion of the center is a part of a devastating strategy that Planned Parenthood is deploying, placing mega abortion facilities in urban communities that are within walking distance of minority neighborhoods throughout the country,” Leslie Monet said in a statement. “It is part of their operational strategy to place these abortion mills in our communities, and we will not tacitly accept being targeted in this manner.” Monet is the director of the Family Life Campaign for the Church of God in Christ, which is the largest Pentecostal denomination in the country with a majority of African-American members.

Abortion disproportionately affects African-American women, making up 28% of all abortions despite the fact that African Americans make up just 12% of the overall population. A majority of Planned Parenthood facilities are also located within walking distance of minority neighborhoods, and a Live Action investigation has found that Planned Parenthood’s counselors have a habit of lying to patients by peddling medical misinformation.

The abortion industry is increasingly finding that its only chance of remaining in business is by silencing pro-lifers like Human Coalition. If women were to find out there are other options and resources available to them, people willing to give them help and support when they are at their most vulnerable and afraid, they might choose life, and this would mean less money for the abortion industry. It’s ironic that abortion advocates so frequently accuse the pro-life movement of lying, when lies are all that the abortion industry has left to sustain itself.