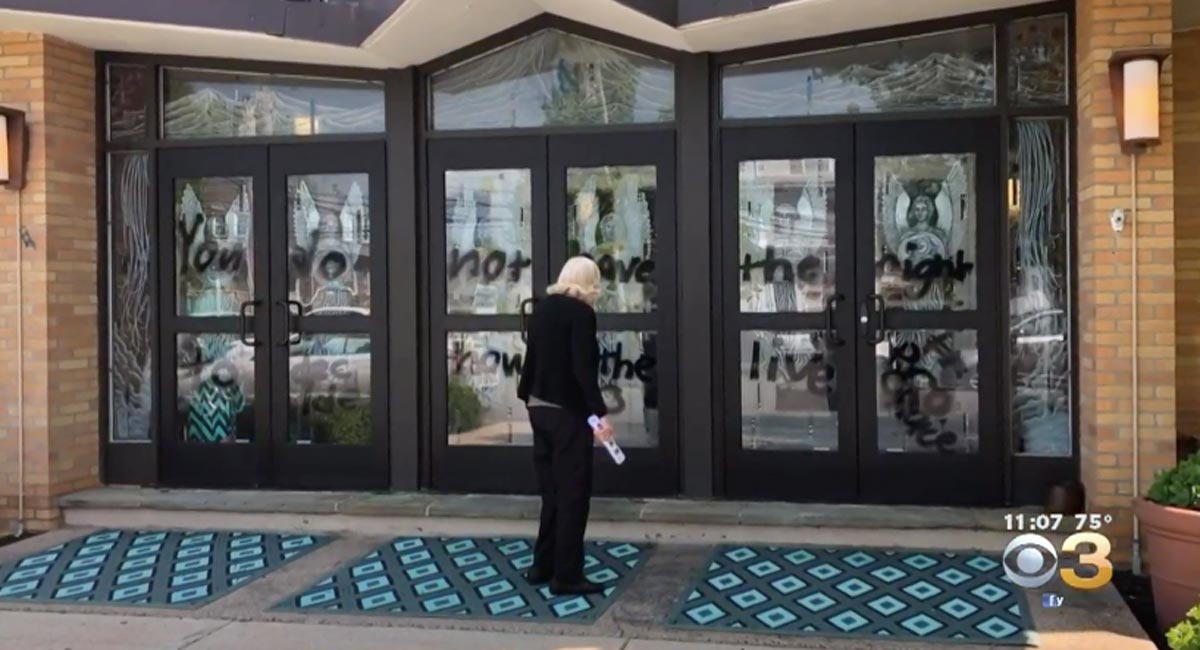 Parishioners of Notre Dame de Lourdes Catholic Church in Swarthmore, Pennsylvania, awoke to an unpleasant shock to discover their church had been vandalized early last Sunday.

Just before 9am, a parishioner discovered a message spray painted across the glass doors of Notre Dame de Lourdes parish. The parishioner immediately notified the pastor, Father Joseph Devlin, who immediately alerted the police.

The graffiti read, “You do not have the right to decide how others live #Prochoice.” The side of the church was also spray painted with the “Prochoice” hashtag.

The message upset parishioners, who were beginning to show up to Sunday Mass. “It was very shocking to come up to the church and see that,” parishioner Jessica Prince told CBS3 Philadelphia. “I’d have to say the first half of mass was me crying the whole time because I was so upset somebody would do that to the church.”

Parishioners removed the graffiti by the afternoon.

Surveillance video captured the image of the suspect: a white male dressed in dark clothing, spray painting the message around 3:30 that morning.

#RidleyTwp. Police was called to Notre Dame de Lourdes Church yesterday for a report on vandalism. Spray painted on the front doors was, “You do not have the right to decide how people live #prochoice” https://t.co/hQ18tmRVG0 pic.twitter.com/w2TxPxcMg7

This is not the first act of vandalism or violence towards pro-lifers in 2019. Abortion has remained at the forefront of national news since Justice Kavanagh was confirmed to the Supreme Court and there has been some hope of overturning Roe v. Wade. Last month, a state representative bullied and harassed pro-lifers praying outside of an abortion facility in Philadelphia, Pennsylvania, and attempted to get the identities of the 13- and 15-year-old minors. Right to Life Michigan was also vandalized last week.

These acts occurred following Alabama Governor Kay Ivey’s signing of one of the most pro-life laws in the country, making abortion a felony for any physician committing the procedure in the state. The law, which has been celebrated by those who fight for the rights of preborn humans, has triggered severe criticism and outrage from pro-abortion activists.