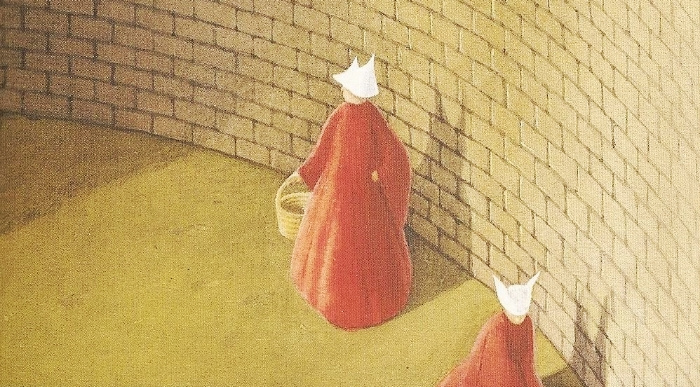 You may have noticed that the media is aggressively hyping “The Handmaid’s Tale,” a new Hulu TV drama adapted from a 1985 novel about the oppression of women in a fundamentalist society, because it supposedly sums up where America is heading under the rule of Donald Trump, Republicans, and the “Religious Right.” And like any of these childish, demagogic exercises in feeding a partisan persecution complex, abortion laws play a starring role.

At science website io9 (formerly a sub-blog of the loathsome Gawker, before its richly-deserved collapse), Beth Elderkin marvels at ten laws “straight out of The Handmaid’s Tale handbook.” So let’s dive in and see why, if this really is pro-aborts’ idea of dystopia, these people wouldn’t know real tyranny if its boot came right down on their neck.

Before starting her list, Elderkin begins by talking about the American Health Care Act, the Republican bill recently passed by the House of Representatives that is often falsely described as repealing Obamacare (in reality, it has been estimated to repeal at most 30% of Obamacare):

Should AHCA become law, it will defund Planned Parenthood for one year unless it stops offering abortions, as well as make sexual assault, domestic violence, and pregnancy pre-existing conditions for states that set up high-risk insurance pools[.]

Oh, grow up. First, it must be acknowledged that the process of drafting and amending the AHCA was a rushed, convoluted mess, so I’m certainly not going to pretend to know how well its plan to handle preexisting conditions would work out, but the idea that it would “make sexual assault, domestic violence, and pregnancy pre-existing conditions” is a lie.

Associated Press fact-checker Tom Murphy acknowledges that the bill “doesn’t specifically refer to any of these things,” and Washington Post fact-checker Michelle Ye Hee Lee explains that the talking point is “almost meaningless” because at least 45 states already expressly prohibit such insurance discrimination, and even in one of the five states (or fewer) that didn’t, it would take “several leaps of imagination to assume that survivors of rape and sexual assault will face higher premiums as a result of conditions relating to their abuse.”

Second, as Live Action has explained in depth many, many times (see the latest from Susan Michelle-Hanson here), defunding Planned Parenthood would simply take tax dollars from a corrupt and ineffective organization and redirect it toward legitimate women’s health providers. Besides, Planned Parenthood fans’ hysteria is a little premature, considering the Senate is writing its own health bill rather than voting on AHCA, and that by using the reconciliation process to get the bill around the current filibuster rules, they are playing chicken with the possibility that defunding Planned Parenthood will be deemed ineligible for reconciliation and cut from the bill.

There are a lot (and I mean a lot) of other falsehoods in the rest of Elderkin’s piece, but for the sake of space and relevance we’re only going to dissect the ones most related to the abortion battle:

[…] Last year, [Vice President Mike] Pence (as governor) signed a law “with a prayer” that demanded all aborted or miscarried fetuses get buried or cremated—which has been criticized for doing nothing except mentally torturing the women affected. The law is now shared with Texas and Louisiana, though they’ve had trouble enacting it thanks to hold-ups in court.

Nonsense. As I explained in my debunking of the attacks on the Indiana and Texas laws, requiring humane treatment of dead humans (what a concept!) doesn’t require the mothers to do or pay for anything (unless they request to keep the remains for an alternate means of burial). The only reason Elderkin and her ilk hate these laws is because they fear the prospect of anyone stopping even for a second to think about what abortion’s victims really are. She goes on: “Indiana is also the second state in the country to ban abortion in cases where a fetal birth defect was discovered.”

So wait a minute: Indiana doesn’t want to kill children based on their physical ailments…yet they’re the dystopia here? Does Elderkin know actual dictatorships’ positions on “defective” people tend to be the exact opposite?

“Some states, like Arizona,” Elderkin writes, “even let doctors lie to a woman if a defect is found to reduce the risk of her wanting an abortion.” The author offers no citation for this claim. Presumably she’s referencing laws that shield doctors from “wrongful birth” lawsuits in cases where they allegedly fail to disclose a condition for which a mother would have aborted had she known about it. However, the issue here is not that it’s ever okay for a doctor to lie, but that the concept of legal liability for not causing a death is an even greater affront to both law and medical ethics. The real problem is that legalized abortion imposes an impossible decision on doctors who still take the Hippocratic Oath seriously—a contradiction that will never go away until abortion is abolished for good. She continues:

[Donald] Trump has promised to appoint judges who would overturn Roe v. Wade, returning full control over abortion access to the states. Some states, like California and Hawaii, already have laws that protect a woman’s right to an abortion. Others have the exact opposite. At least six states in the US have so-called “trigger laws,” which are laws on standby to make abortion illegal in the state as soon as Roe v. Wade is overturned (technically they signal the state’s “intention,” but opponents say they could be enacted quickly if not immediately).

States voting on their own laws? Pro-abortion women not being able to kill their sons or daughters? The horror! By any rational, fact-based standard, overturning Roe and banning abortion (or at least returning it to the democratic process) would actually make America less dystopian. I don’t expect the folks at io9 to grasp that, but perhaps they can at least consider the following: if women find life in a pro-life, post-Roe state so intolerable, then they will be perfectly free to move to a state that shares their values, and if pro-life states truly become the hellholes of pro-abortion fever dreams, then repealing those laws will be a winning issue in their state elections.

Again, the root cause of this hysteria is not concern that women need Roe, but fear for what happens when they see for themselves that they don’t. Elderkin writes:

Some women in Kentucky have reported that doctors turned them away for wanting to get their tubes tied, or tubal ligation, if they were younger than 25 years old, unless they already had at least three kids. This is a response shared across several states, like Illinois and Colorado, where women are routinely denied permanent birth control.

A little common sense makes clear that the issue here is age, not gender. The fact is, most people—men and women alike—lack the perspective and life experience in their early twenties (often just out of college, still in school, etc.) to know with absolute certainty that they’ll never want children, so delaying such a life-altering (and permanent, absent costly reversal surgery) decision is entirely prudent.

Besides, the law doesn’t force doctors to make this determination; it simply protects their own freedom of choice, while young people certain of their decision remain free to seek out a more willing physician. Funny how the “pro-choice” side doesn’t see choice as a two-way street…

Right now, women in seven states can be forced to share parental custody with their accused or convicted rapists, and efforts to repeal those laws have continued to fail. The latest example is in Maryland, where rape victims have to negotiate with their accused rapists for custody rights, and also have to get permission from them to put their children up for adoption.

Elderkin is absolutely correct: these laws are insane, disgraceful, and desperately need to be changed. However, she omits the fact that this situation is a bipartisan failure.

You may recall that in 2012, we covered a particularly egregious case of this in the pro-abortion Mecca of Massachusetts. Since Elderkin highlights Maryland, it’s worth noting that the State Senate has more than twice as many pro-abortion Democrats as pro-life Republicans, and the House of Delegates has almost twice as many.

So how did the General Assembly fail to advance a solution nine times in a row when it’s completely under the control of the champions of “women’s rights” and “bodily autonomy,” the enemies of patriarchy and “rape culture,” the party of Planned Parenthood and Hillary Clinton?