Father Stephen Imbarrato, a regular guest on Catholic television network EWTN (according to Life Site News), along with two other pro-life activists, mounted a Red Rose Rescue at a notorious late-term abortion facility in Washington, D.C. this week. In a Red Rose Rescue, pro-life activists enter the waiting room of an abortion facility, where they know they are likely to be arrested. According to a press release from Fr. Imbarrato, “Inside the waiting room, they offer help to abortion-minded mothers, counsel them to change their minds about aborting their babies, pray with them, and give them red roses. Typically in these situations when asked to leave the facility by law enforcement, each rescuer offers an act of non-violent passive defense of the unborn children about to die. This usually results in the pro-lifers’ arrests and possible incarceration.” 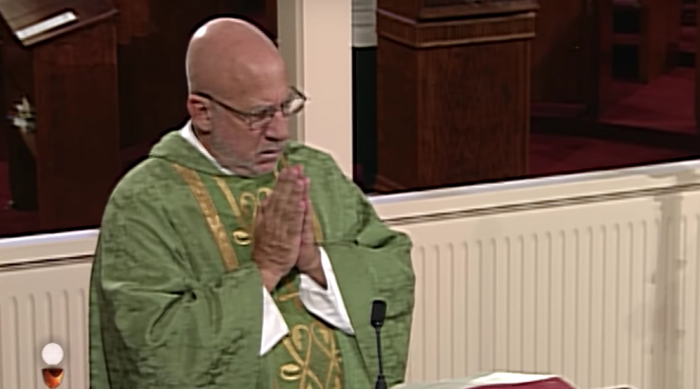 Those who initiated this Red Rose Rescue state that they enter the abortion facilities because many are “located in multi-unit buildings in which the moms are not identifiable or accessible to sidewalk counseling,” and therefore cannot be counseled outside the facilities. The group stresses that its approaches are intended to be “peaceful,” and that they do so because they believe it is “moral, right, and just” to enter an abortion facility with the purpose of “sav[ing] babies and help[ing] pregnant moms.”

Once inside, the activists give each potential abortion patient a red rose with a message attached, which says, “God is love and he loves you and your unborn baby. Don’t be afraid. Your life circumstances will change and this baby will give you boundless joy… There is help for you and your baby.” On the back, they say, are numbers for local pregnancy resource centers.

The Washington Surgi-Clinic is run by abortionist Cesare Santangelo, who was featured in a video as part of Live Action’s InHuman undercover investigation series discussing whether he would attempt to save a 24-week-old child who survived a late-term abortion at his facility. A preborn child at 24 weeks is two weeks past what is considered to be the age of viability, and has at least a 50 percent chance of survival. In the video below, Santangelo says, “… You know, legally, we would be obligated to help it, you know, to survive. But you know, it probably wouldn’t…. If you do everything possible to help it survive, there’s a — maybe a 20-30 percent chance that it would survive” at 24-25 weeks, he inaccurately claims.

“Hopefully we’ll get the pregnancy out intact but it doesn’t always happen that way. I cut the umbilical cord first, the fetus will expire first, and we do it that way… hopefully the fetus will expire first…” Santangelo explains that the dilation process takes two days. Obviously, if this were a life-threatening emergency to save a woman’s life, an abortion would not be the best course of action. Instead, the child should be delivered alive, in a hospital, and all attempts should be made to save the baby’s life.

Fr. Imbarrato told Life Site News that if he could tell expectant mothers who are considering abortion anything, it would be to “think about how beautiful your little boy or little girl is and what will happen to your baby if you don’t protect them. Please also think about how much joy babies bring into the world. Regardless of your situation, there are many people who will help you and your baby overcome the problems you face. Love your baby.”

Author’s Note: If you are considering an abortion, please click here for 9 things you should know.