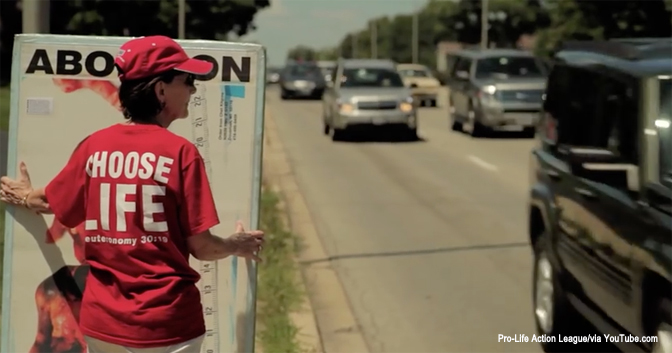 This weekend, the Pro-Life Action League began its annual Face the Truth Tour, the group announced on Facebook.

Running from July 10 to this Friday, July 18, pro-lifers “will visit sites throughout the Chicago area, holding pictures of beautiful unborn babies and huge signs depicting the victims of abortion.” The post has full details of where and when demonstrations will be held all week.

On Pro-Life Action League’s website, John Jansen writes that graphic abortion images “without question” are “indispensable in the fight against abortion […] you’d be amazed how often we hear passersby say things like, ‘That’s what an abortion an aborted baby looks like?’”

The use of graphic images of aborted children is a contentious tactic within the pro-life movement. Live Action News has previously published commentary arguing both sides of the debate. Kristen Hatten has argued that unless a pro-choice viewer has been first opened to considering the pro-life view by prior discussion, they will only “see their own beliefs being assaulted; they see an obscene thing being shoved in their face; they see their young children being frightened and confused.”

On the other side, Stephanie Gray made the case that “as history has shown, public perception of social reformers was not very high until public perception of the injustice changed […] this social change occurred because the ugly, disturbing, unpleasant, gut-wrenching facts were shown.”