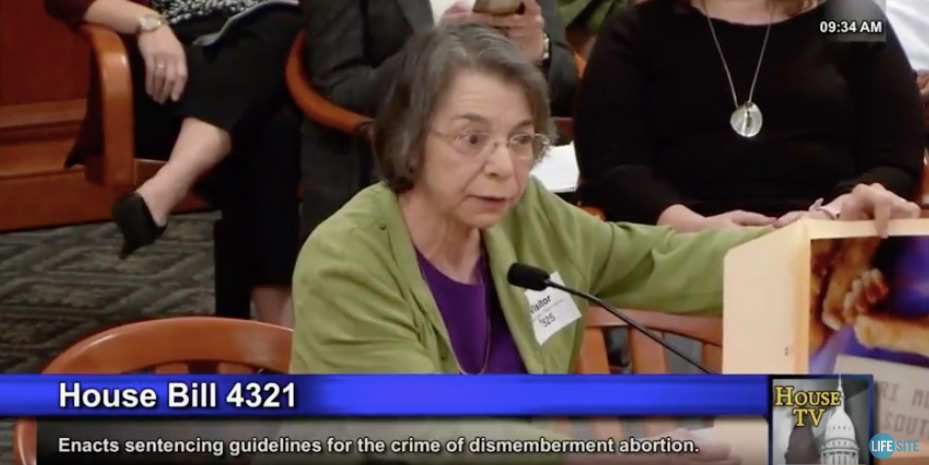 Dr. Monica Migliorino Miller of Citizens for a Pro-life Society recently delivered a powerful four-minute speech to a Michigan House committee which is currently considering HB 4320, which would expand the state’s partial-birth abortion ban to include a ban on dismemberment (D&E) abortions, a brutal process in which the limbs are torn from the torso of a yet-living child in the womb.

In her speech, Dr. Miller pointed out that not even an animal would be treated the way our society treats preborn human beings. According to LifeSite News, Dr. Miller has been involved in pro-life work since 1976. In her testimony, she told of how years ago, she and other pro-life activists found the bodies of aborted children inside trash bags which were thrown in the dumpster outside the abortion facility of Michigan abortionist Alberto Hodari. These children were dismembered and still wrapped in the blue surgical paper that was used during abortion procedures. They weren’t even treated as medical waste; they were quite literally dumped in the garbage.

LifeSiteNews reports on Dr. Miller’s testimony at the hearing:

The liberals on the committee, LaTanya Garrett, Brenda Carter, and Cynthia A. Johnson, all Democrats, were hostile toward most of the other pro-life witnesses at the hearing, but sat in silence during and after Dr. Miller’s testimony, seemingly not wanting any part of challenging her. Following her remarks, Miller appeared to get up and hand-deliver copies of the photo to each of the Democratic lawmakers.

Listen to her powerful statements:

We held in our own hands and we saw with our own eyes the severed limbs of dozens of aborted babies, most of them early second trimester, some of them approximately 20 weeks gestation….

These unborn children were literally cut to pieces in dilation and evacuation abortion procedures….. These unborn children were human beings. They died a most horrific torture method of extermination. They were dismembered — a barbaric action we would not do even to an animal, shouldn’t even do to an animal. Dismemberment abortions bear within them an even deeper significance. To dismember the unborn means that we actually dismember them from the human family. We sever them from inclusion into the human family. And these unborn children are literally treated as if they were no more significant than trash. It’s an indictment on our culture….

I think it’s important if you’re going to support abortion, you should look at it. This is one of the babies that we took from… the Hodari trash dumpster. We must oppose this. This is wrong. The unborn have a right to exist… and we can do better for women who are in need….

The video below shows what a D&E dismemberment procedure is like: