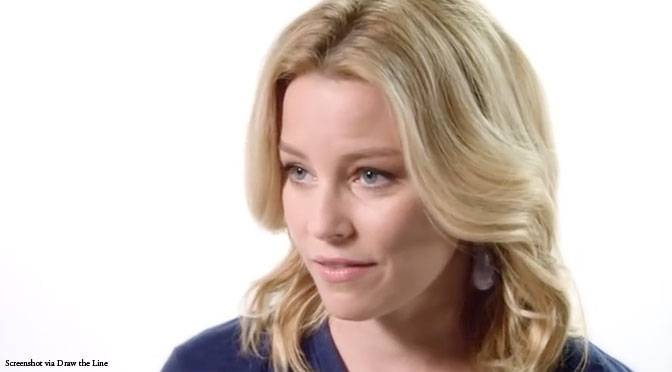 Elizabeth Banks (The Hunger Games, Pitch Perfect 2), Bellamy Young (Scandal), Dascha Polanco (Orange Is the New Black), and Retta (Parks and Recreation) are among the group of celebrities that have teamed up with the Center for Reproductive Rights to create a series of videos promoting women’s abortion stories.

The Draw the Line videos are short monologues which feature the actresses telling the story of other women’s abortions in first person. This approach is intended to be “more personal and emotional” than a typical ad or public service announcement would be. The stories chosen describe various scenarios in which women chose to abort their babies, and the reasons are just as varied.

Rebecca’s story, as told by Elizabeth Banks, details a woman’s decision to abort her baby because the baby’s father was physically abusive – and ignores the significance of the child’s life. “I told [my friend] I could not have my abuser’s baby. I could not create a life with such a hateful man,” Rebecca says. “What I remember the most about my experience is how the women in my life stepped up to support the decision I was choosing to make, because the life they were most concerned about was mine.”

Laura’s story, as told by Mercedes Mason, states, “I wanted an abortion. Period.”

Dascha Polanco, telling Kayleigh’s story, describes writing out a list of pros and cons of being pregnant, then declares, “I made the best decision possible, for me. I scheduled an abortion.”

While the videos are well made and feature extremely talented actresses, they fail to contribute anything of substance to the abortion debate. Instead, they rely on emotional reasoning and self-focused arguments, downplaying the humanity of the preborn child.

Haven’t we seen enough of that?