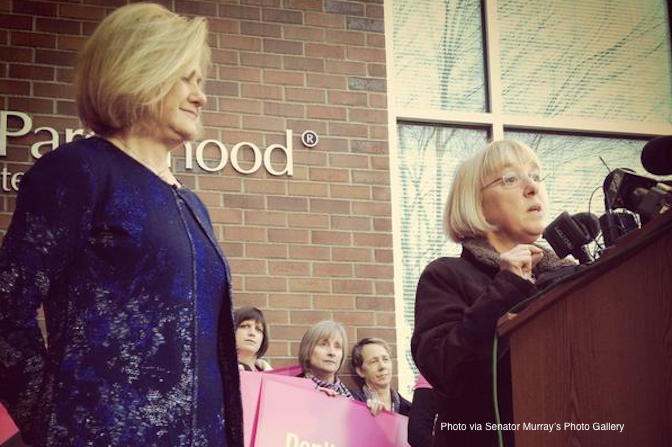 Oh, this oughta be good.

Murray circulated a staff memo and a letter singling out Trump’s picks of prominent pro-lifers Charmaine Yoest and Teresa Manning for prominent roles in the Department of Health and Human Services. The supposed “misinformation” Murray claims they’re responsible for? Here’s the list:

Murray points out that Yoest “believes that abortion increases a woman’s risk of breast cancer,” citing “research by the American Association of Pro-Life Obstetricians and Gynecologist[s].” Murray’s memo claims this is false because the National Cancer Institute, the American Cancer Society, and the American Congress of Obstetricians and Gynecologists say so, but offers no refutation of AAPLOG’s work. But as Live Action readers may recall, I addressed the breast cancer link (and the credibility of NCI and ACOG) in extensive detail here, and as it happens, pro-life researcher extraordinaire Michael New just defended Yoest on this point:

Scholars who supported the abortion–breast cancer link were not invited to make formal presentations at the [2003] NCI workshop. Furthermore, the new research that was presented at this workshop was neither available to other researchers nor peer-reviewed.

[Washington Post “fact-checker” Michelle Ye He] Lee does find plausible the arguments put forth by AAPLOG and BCPI that, due to changes in hormone production and breast-tissue development during pregnancy, late-term abortions may increase the risk of breast cancer. Indeed, a substantial body of empirical research supports this finding. Skeptics of the abortion–breast cancer link argue that the 1997 New England Journal of Medicine study by Melbye, et al. is the methodologically strongest study on the topic. However, even this study finds that abortions after eighteen weeks of gestation are correlated with a statistically significant increase in the risk of breast cancer.

Second, Yoest argues that intrauterine devices have “life-ending properties,” which the memo denies on the grounds that IUDs “do not work after implantation and therefore cannot end pregnancies.” Sorry, Senator, but you’re the one peddling misinformation—the abortifacient potential of IUDs has indeed been documented.

Murray alleges that Yoest once said “when it comes to rape, women tell the truth about half the time.” For the record, the actual author of the post containing this line appears to be Charmaine Yoest’s husband Jack, so even if this one is false, it’s not evidence of Murray’s premise.

That said, is it false? I don’t know; Mr. Yoest appears to have been citing a study referenced here which did find that percentage (albeit on university campuses, not society as a whole). Other studies of course find drastically smaller numbers, but for what it’s worth, in 2014 Slate columnist Cathy Young detailed the myriad difficulties with accurately gauging the problem, but concluded feminists do women no favors by pretending it almost never happens.

Yoest supports abortion reversal, which the memo suggests is junk science because, again, ACOG says so. It’s an interesting definition of “junk science,” considering abortion pill reversal has a 60-70% success rate and dozens upon dozens of babies are alive today as proof.

Murray claims Trump appointee Manning “lied about the guidelines for a legal abortion” when she said Roe v. Wade “legalized abortion throughout the country, that is abortion on demand, for any reason, during all nine months of pregnancy, including delivery,” because Roe allows abortion to be banned in the third trimester. Seriously? This is Abortion Law 101—while Roe limits abortions on paper, in practice its health exception is defined by Doe v. Bolton so broadly that it’s effectively meaningless.

Murray takes issue with the fact that Manning called the abortion industry “the most unregulated business in this country,” and said that “as a result, women die.” Murray’s memo declares that abortion facilities are indeed regulated and “extremely safe” when legal, according to the ACOG—never mind that what passes for “regulation” is abortion providers committing a laundry list of health violations yet still being embraced by the abortion lobby, complete with the Supreme Court declaring a wide range of basic regulations illegal—whereas illegal abortions “account for nearly 13% of all maternal deaths.”

Funny thing, though: when you actually read the ACOG page, you find out that 13 percent number is worldwide. It includes third-world countries with poor-to-nonexistent health standards, meaning an epidemic of maternal deaths is not attributable to back-alley abortions in the United States (and never was).

Grimaldi decides to add to Murray’s hit piece by hitting Manning for once saying in an interview that “contraception doesn’t work” (ridiculous; she obviously wasn’t literally saying it never works, only that it’s not a guarantee) and HHS Secretary Tom Price for saying “there’s not one” woman who can’t afford contraception (which I explained and defended here).

Finally, this was an… unfortunate… line of argument for Patty Murray to pursue, considering she has her own record of using her position to spread actual misinformation, including claims like, “Planned Parenthood is about providing federal funds for care like mammograms and cervical cancer screenings and prenatal care and family support and counseling,” when in reality, mammograms are nonexistent at Planned Parenthood, and its prenatal care is negligible and dropping.