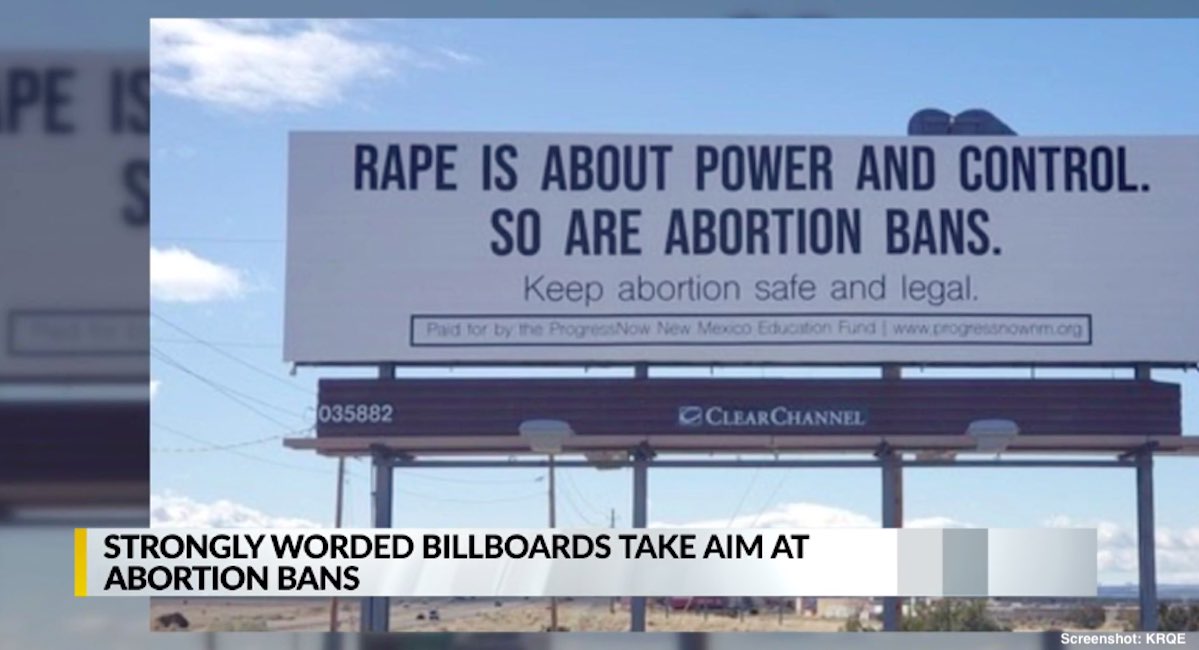 An attention-getting new billboard on I-25 between Albuquerque and Santa Fe, New Mexico, recently tested a new strategy of pro-abortion outreach. The billboard, clearly meant to shock, reads, “Rape is about power and control. So are abortion bans.” Another billboard, placed on the side of a truck which circled New Mexico’s Capitol building as well as in downtown Santa Fe last week bore the messages, “Voted against abortion access? We didn’t forget,” and “Keep abortion safe and legal.” ProgressNow New Mexico, a group fighting to keep abortion legal in the state, is the group behind the billboards.

Marianna Anaya, the director of communications for the organization, stated, “2020 will be a decisive year for the future of abortion access, and it’s critical that we defeat the agenda of anti-abortion groups and lawmakers and expose them for what they are — extreme, violent and cruel.” Video below from KRQE:

READ: Abortionist admits abortion is ‘violence’ and the killing of a ‘person’

So, why is ProgressNow equating rape to abortion bans? Anaya explained, “For any of us who are survivors of rape, sexual assault and domestic violence, we’ve been told over and over that these forms of abuse take place because the abuser wants to assert power and control over our bodies… so in the same vein we know that politicians and anti-abortion extremists are trying to assert control over our bodies by banning abortion.”

What Anaya fails to see is that abortion may be promoted under the guise of giving women control over their own bodies, but in actuality, it takes away the human rights of the child in the womb and exploits women further after rape. Many women have found that an abortion after rape only leaves further emotional, psychological, and physical damage. The regret of ending a life on top of the horror of rape only amplifies the pain they must work through. And in truth, abortion is violence against the innocent body of the child — something abortion advocates prefer to ignore altogether. It is not a sterile, tidy procedure. Abortion shreds apart or tears apart the living body of a human being in the womb:

ProgressNow’s motivation to create the billboards was a reaction to pro-life efforts to challenge Roe v. Wade. According to NM Political Report, local nonprofit Forward Together conducted a survey of New Mexicans and found that 74% were “in favor of women having the right to make their own abortion decisions.” NM Political report also notes that the Pew Research Center found that 61% of Americans support abortion being legal in most or all cases — but what does “most or all cases” truly mean? When citizens are asked specifically about time frames and circumstances of abortion, they give very different answers: 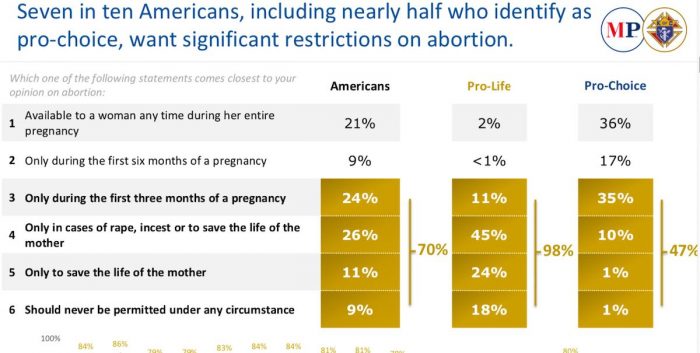 A very recent set of polls showed that 70% of people support significant restrictions on abortion (see chart above), and they also support things like requiring abortionists to maintain hospital privileges, waiting periods for abortions, and informed consent laws.

Abortion is not a form of control over a woman’s body. It’s a method of exploiting women and canceling out the right to life of an innocent human being.