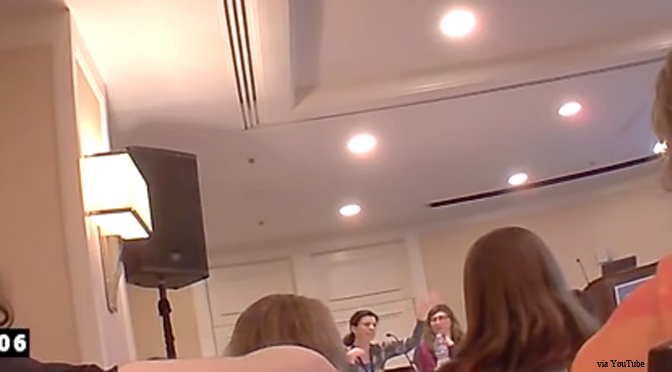 In one of the recently leaked videos shot by the Center for Medical Progress at a National Abortion Federation conference, an abortionist make some shocking admissions about aborted babies.

Her statements are made in the question and answer period after her talk on informed consent laws and abortion regret. An abortion clinic worker in the audience explains how she sees pictures of aborted babies on social media and disputes the way they are labeled. Complaining that people do not listen to her when she corrects them about the details of the pictures, she says:

How do we, like, just essentially stand up and say, we are the experts on this, and you all just don’t know what you’re talking about.

… I actually have a different response when someone portrays those images. And I say, yeah, that some weeks [that] actually looks like what I would expect.  You may have some of your facts wrong, at 9 weeks it doesn’t look like this, at 22 weeks it does look like this – but yeah, actually, that’s my week some day, some weeks, and that’s what it looks like.

This abortionist flat out admits that the aborted baby pictures pro-lifers show are true. The dismembered arms and legs, the parts of faces, the crushed skulls are all real. She then says (around 17:20):

And I actually think, and I’ve been pretty vocal about it, so I’ll say it here, you know that, it’s been a failure of pro – ignoring the fetus is a luxury of activists and advocates.

At this the audience laughs. It is clear to them that while pro-choice activists can downplay the violence of abortion and minimize the existence of torn apart fetal bodies, abortion providers see those bodies daily. They must confront reality. The carnage is always before their eyes. Pro-choice politicians (including the ones that support Planned Parenthood but will not watch the videos shot by the Center for Medical Progress for themselves) can pretend aborted babies don’t exist – but abortionists know that they do.

If you are in there every day with women, and if you’re a provider, you can’t ignore the fetus, right, because the fetus is your marker of how well, how good a job you did. Right? If you don’t account for all the parts and you don’t look carefully, you may be setting someone up for infection or hemorrhage, or whatever – the fetus matters clinically to us.

Here we have confirmation of the testimonies of former clinic workers who describe how they pieced the bodies of aborted babies together to make sure no parts were left behind to cause complications.

The abortionist then talks about how she believes her patients  know they have babies inside them (17:44):

So the idea, I actually think that we should be less about denying the reality of those images, more about acknowledging, that yeah, that’s kind of true. So given that we actually see the fetus the same way and given that we might actually both agree that there’s violence in here, ask me why I come to work every day. Let’s just give them all- the violence, it’s a person, killing – let’s just give them all that. And then, the more compelling question is, so why is this the most important thing I can do with my life. Let’s talk about that. And – so that’s my answer to that. I don’t think it needs to be about correcting facts, I think it can be, needs to be about moving the conversation to a different place.

At this point, the room breaks out into applause.

So this abortionist does not dispute the truth of pro-lifers’ claims. Abortion is “killing” a “person.” Instead of denying the reality of abortion, she wants to turn the conversation into a dialogue about the motives of abortion providers. She does not seem to realize that the reasons why abortionists kill babies are not as compelling to pro-lifers as the fact that the babies are actually being killed. We oppose abortion in order to save preborn lives. Whatever twisted reasons abortionists have, whether money or the misguided desire to “help” women (when we know that abortion actually damages women physically and psychologically), are not our focus. It is not the motives of the killer that are important in the abortion debate. It is the plight of those killed.

Other abortionists have also admitted that abortion is killing.  Some have even used the term “baby” to describe the preborn child. Abortionists usually have no illusions about what they do at work every day. The words of the abortionist quoted above further strengthen the pro-life position because they verify the facts that so many pro-choice activists would like to deny. Pictures of aborted babies are accurate and abortion is killing a person. These are the truths that pro-lifers must always keep front and center in the abortion debate.