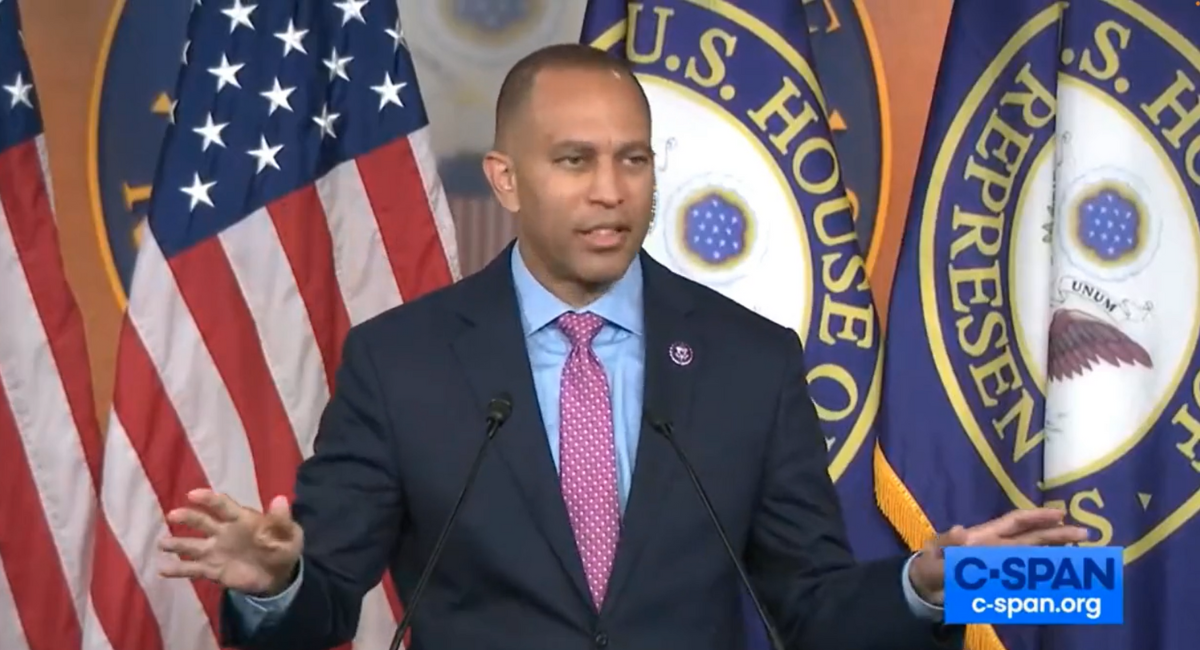 A pro-abortion lawmaker spoke about the pro-life movement in a recent press conference, in which he criticized pro-life legislators as being “extreme” and a “threat” to the United States.

Hakeem Jeffries, a congressman representing Brooklyn and Queens who also serves as the chairman of the Democratic Caucus of the United States House of Representatives, spoke about how “extreme MAGA Republicans” are “out of control” in a clip he posted to Twitter.

Extreme MAGA Republicans are totally out of control. pic.twitter.com/gRybv18uIP

Rhetoric like this is dangerous, as violence against the pro-life movement has been rapidly increasing since the fall of Roe v. Wade. Countless pregnancy resource centers, pro-life offices, and churches across the country have been firebombed, burned, and graffitied. Extremist groups like Jane’s Revenge have published numerous threatening communiques using terrorist language; lately, the group has taken to applauding acts of violence and vandalism against the pro-life movement. After the Dobbs v. Jackson Women’s Health Organization decision, which overturned Roe, Jane’s Revenge called for a “Night of Rage,” and claimed attacks across the country were only beginning.

This attack is nothing in comparison to what is in store for you. Some spray paint will be the least of your worries. For decades you have bombed abortion clinics and murdered doctors. We fight not just for abortion rights, but for trans liberation, ecological harmony, decolonization, the destruction of white supremacy and capitalism, and the uprooting of the entire global civilization.

We will hunt you down and make your lives a living hell. You started this war but we will win it. So far its just been pregnancy crisis centers, but tomorrow it might be your cars, your homes, or even your lives. We support a diversity of tactics and we will not step down in this fight.

In a more recent update, they celebrated an attack on two pregnancy resource centers in Massachusetts.

“The a******s who lie to vulnerable pregnant people about abortion to confuse them and convince them to not seek abortions discovered this morning that their buildings had been redecorated with paint and broken glass,” they wrote.

“As others have said, it is fun and easy to attack. As more people discover the joy in attacking the infrastructure of the patriarchy, the attacks will surely continue with increasing frequency. To anyone reading this thinking that it sounds like a good time, consider this your invitation to join the party. To any purveyors of patriarchy that might be reading this, f*** off, or you could be next.”

Perhaps most alarmingly, a man was arrested for plotting to kill Supreme Court Justice Brett Kavanaugh, specifically citing Roe as his motivation. This came after the pro-abortion group “Ruth Sent Us” doxxed certain Supreme Court justices, releasing their addresses online and flooding their neighborhoods with protests.

House leaders also recently blocked a resolution that would have condemned these attacks. It’s clear that the lack of condemnation — and hate-filled rhetoric from people like Jeffries — are fueling these attacks and encouraging them to continue.