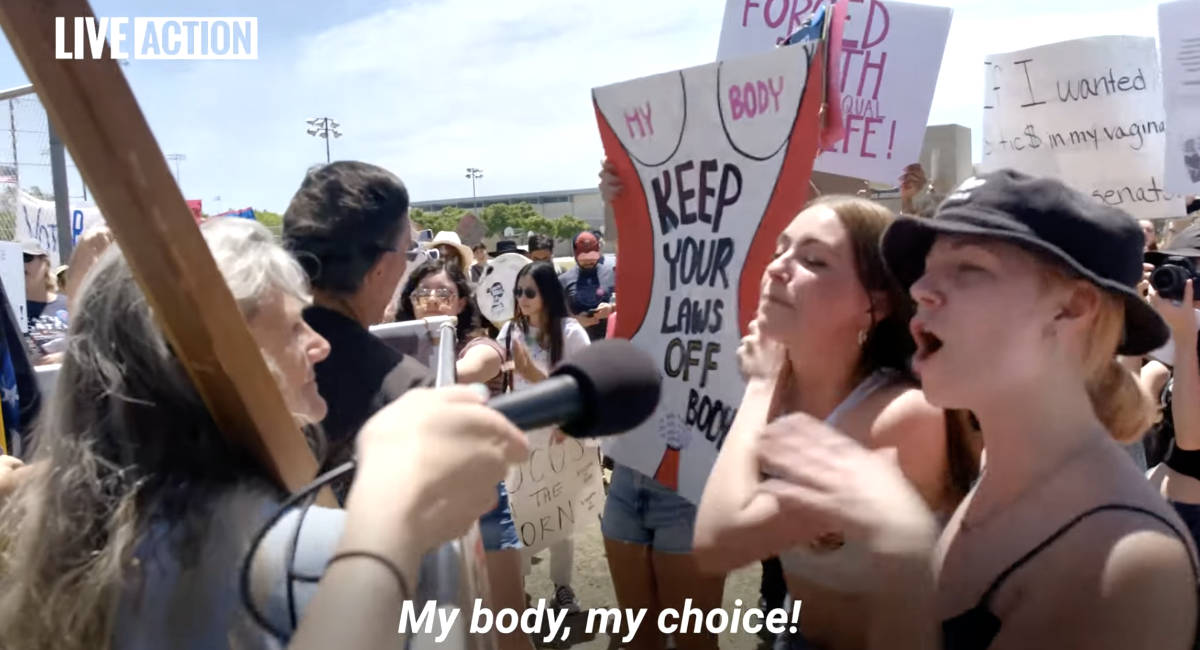 Live Action reporters attended the “Bans Off Our Bodies” rally in Los Angeles, California, and saw just how far abortion activists will go to defend the killing of human beings in the womb — and even outside of it.

In one video, an abortion activist repeatedly says that a mother can kill her child at any time, even after birth, if that is her choice. In the second video, abortion activists violently screamed at pro-life advocates, claimed there should be no restrictions on when a child in the womb can be killed, and again said children should be able to be killed after birth.

“Whatever the woman wants to choose to do”

A Live Action reporter interviewed a woman who said a mother should be able to kill her children if it’s her choice, even at two years old.

Live Action: Do you believe in abortion after birth? Would you support that?

Abortion activist: I believe in whatever the woman wants to choose to do. That’s her choice.

At any point of the child’s life?

And at any point of the lady’s life, that’s her choice.

To kill another person’s body is.

It’s going to always be her choice.

Even after the baby’s born.

Is always her choice.

So if they’re two years old…

I can kill my two year old.

It’s a woman’s right to choose.

OK… to kill their child at any point.

It’s a woman’s right to choose.

But killing born individuals is… generally illegal in American society, and most people know this. Yet somehow, introducing abortion into the equation seems to cause all critical thinking to disappear.

Pro-life advocates have long pointed out that abortion is the intentional taking of a human life — but doing so after the child is born is, specifically, infanticide. Increasingly, infanticide has been embraced by the pro-abortion movement, so much so that multiple bills containing language and loopholes which legal experts are concerned would legalize infanticide have been submitted in states like Maryland and California. Ultimately, it is legalized abortion that opened the door to accepting infanticide to begin with.

“Well, not safe for the fetus”

At the rally, pro-life advocates faced a litany of abuse as abortion activists screamed in their faces.

Others were willing to speak more civilly about their beliefs. “A woman’s right to abortion should be… you know, as long as they’re safe for her and the fetus, there should be no restrictions,” one woman said, and then clarified, “Well, not safe for the fetus.”

Another woman said she had an abortion in 1982 (she later says this was at six weeks), and it was easy — “bing, bang, boom, and it was done” — and explained she knew she never wanted children. While she said she felt personally uncomfortable with abortion after six months of pregnancy, she said that it ultimately was nobody else’s business, regardless of whether it was a late-term or sex-selective abortion.

“Life does not begin at conception — at, at, fertilization,” she said. When asked when life does begin, she shouted, “When the baby is born!”

Yet when confronted with more specific examples, some of the abortion activists began to change their tune. “Wow, that makes me uncomfortable, about sex-selective abortion,” the first woman said. “It’s just — I don’t know, something about that is nervous to me.” The woman with her agreed, saying once a preborn child can survive outside of the womb, abortion should not be allowed. Yet neither woman would disavow abortions due to disability.

A third woman refused to say sex-selective abortions, or any other eugenic abortions, should be disallowed. “You know, it’s not my decision for what another woman decides she wants to do and needs to do or family,” she said. “It’s not just a woman, it’s a family. So I’m not going to make that decision for anybody else. I’m just… make it for myself, and speak for other women who want to be able to make those decisions for themselves.”

Two more women were asked about the possibility of legalizing abortion after birth (meaning infanticide), and if they would be in favor.

“I mean, at the end of the day, if, you know, people have been fighting saying that it’s parents’ right to choose what they want to do with their child, so I think it’s up to the parents to make that decision,” the first woman said. “And again, it would never be an easy decision for anybody to make. But if they were to make that decision, I’d have to believe it’s for the right reasons.” Neither would name a cut-off for what age a parent should be able to get an “abortion” after birth.

The abortion industry is becoming increasingly extreme, and these videos only continue to show just how out of touch abortion activists are with the general public.