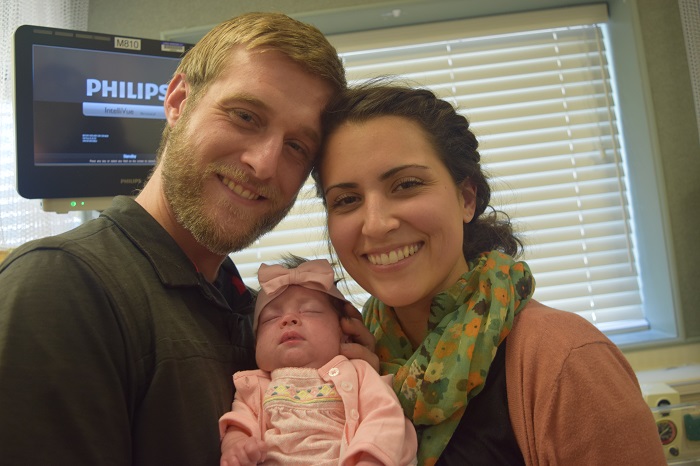 Teacher Staycie Kirkendall and her husband Robbie were excited to be expecting their first child back in the fall of 2015. They had been married for three years and were ready to start their family. While Staycie suffered a few complications early on, including bleeding, the couple had no idea that on the horizon was a frightening complication which would lead doctors to suggest abortion. The couple, however, refused abortion, and what followed was nothing short of a miracle for them and their premature baby.

“I went in for an appointment when I was 16 weeks and there was no fluid,” Stacie told Live Action News. “My doctor and I talked about what had happened the week before and I remembered having several gushes. I didn’t know that’s what it was at the time. She told me that the prognosis for your water rupturing this early is extremely poor.”

Two days later, Stacie was sent to a perinatologist who confirmed what she calls “our worst nightmare.” There was no amniotic fluid found and the specialist gave their preborn baby girl just a one percent chance of survival. If the baby were to survive, the doctor predicted that her lungs wouldn’t be properly developed and her limbs wouldn’t be able to extend since her muscles didn’t have room to stretch in the womb. Because her lungs wouldn’t develop, their baby girl likely wouldn’t be able to take her first breath. 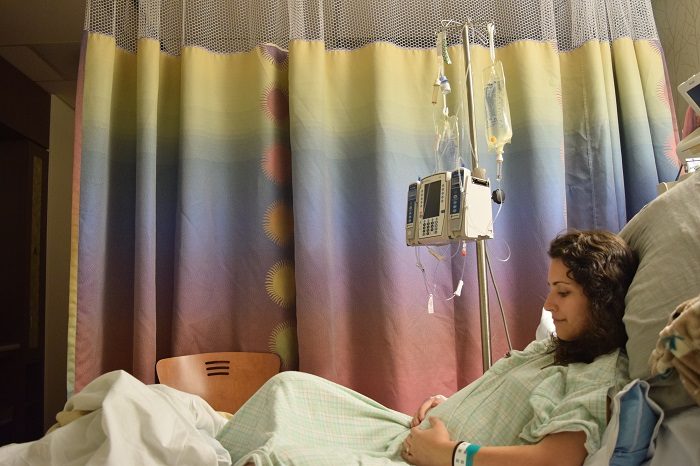 “It was either offer me an abortion or wait until my baby died on her own” said Kirkendall. “The doctor said that I could just terminate the pregnancy and try again, which I am very thankful that our doctors were not as harsh and cold as a lot of the doctors I’ve learned can treat women in our situation. I felt a lot of compassion from them, although they legally had to tell me there was the option to abort. It wasn’t for us.”

The couple chose life and doctors told them they would monitor Staycie and their baby girl as they waited for the baby to pass away. Doctors were also concerned that an infection could occur, causing Kirkendall to develop sepsis, thereby forcing them to deliver the baby too early.

READ: Doctors said we could both die, but I chose life for my daughter

“It was a very scary decision to continue with the pregnancy even though we knew it was the only true option for us,” Staycie explained. “There was the risk that I could go into septic shock if I developed an infection. It was really difficult for my husband and I but we never wavered on our decision to continue the pregnancy. I had the confidence in my doctors and I had the confidence that my husband would be able to make the right decisions if I couldn’t.” 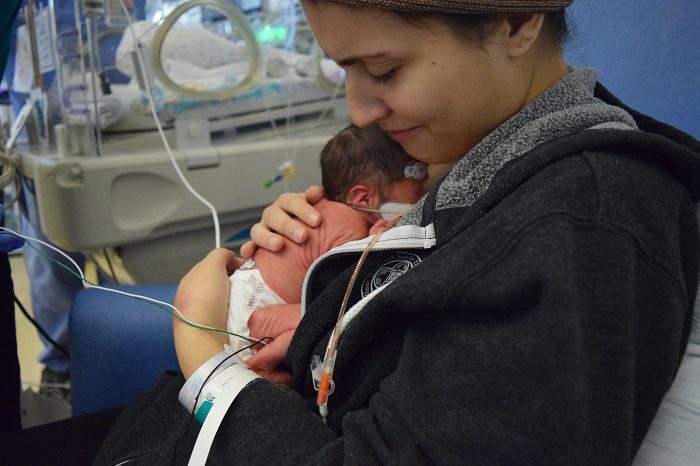 Baby Petra being held by her mother after her premature birth. Photo courtesy of Staycie Kirkendall.

Staycie said the support from their immediate community and the support she found in online PPROM (preterm premature rupture of membranes) support groups kept her going through the most difficult time of her life. Hearing the stories of other women who had been through the same situation gave her hope for her baby girl.

“We had an outpouring of support from our family; even my students and their parents were very supportive,” she said. “It was like our baby was an extremely loved member of our community even before she was born. […] We didn’t have anybody that showed any ill will, but the most skeptical were the doctors. They were still supportive, which is not as normal as you would hope for with doctors trying to push terminating pregnancies if the baby isn’t 100 percent perfect by their standards. We did see a little of that in our experience and a lot more when we reached out to other women going through it.”

The hope she received from her community and support groups was also found in surprising places: a friend’s mother had a dream, which featured a couple whose baby was in trouble during pregnancy. In the dream, Jesus was sitting on the couple’s bed holding a baby with bright blue eyes, like the ones Petra Kirkendall has. An angel told the woman that the baby would be okay. 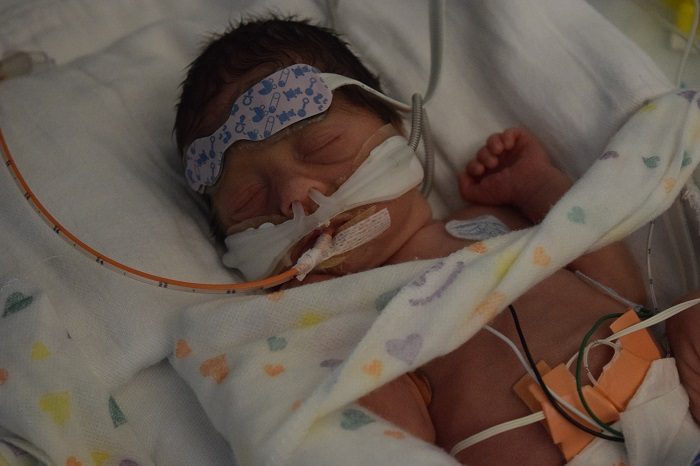 Baby Petra in the hospital after her premature birth. Photo courtesy of Staycie Kirkendall.

“It was very hopeful to hear that dream,” Staycie says. “That brought me a lot of hope from the beginning. Trying to find hope during those times was difficult. I tried to cling onto everything I could. […] It was the scariest time in my life,” she said. “I was also teaching at a Christian school. I taught middle school science. My principal was great and let me teach sitting down and I had much less physical activity. It was scary to go to work everyday and not know if I would go into labor right then and there. I felt a lot of support from our community and we had a lot of people praying for us.”

For eight weeks, Staycie continued to the visit the doctors who were shocked to see her returning for checkups, constantly assuming she would have lost the baby. Her amniotic fluid accumulated, though only to a small degree, but it was enough to be classified as normal. Then at 24 weeks, her water ruptured again.

Staycie was taken to a hospital over an hour from her home, where she remained for another month until developing an infection called chorioamnionitis at 28 weeks and six days. This is an infection of the fetal membranes, which thankfully never reached her baby. Staycie gave birth to a premature baby girl ,whom they named Petra after St. Peter. The Biblical account of Peter stepping out of the boat to walk toward Jesus on the waters of a stormy sea remained a theme for Staycie’s turbulent pregnancy. 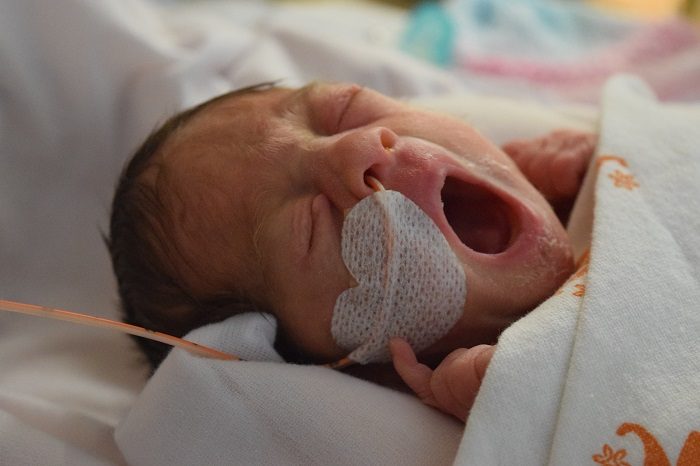 Baby Petra yawns in the NICU after her premature birth. Photo courtesy of Staycie Kirkendall.

“During that whole time, even though she was still growing, they didn’t know if her lungs were going to be able to function properly because they can’t test for that before they’re born so they had no idea that whole time if she would live,” said Staycie. “She was born and within four days she went from being on a ventilator to being completely on room air, so it was pretty remarkable that in a case in which they were worried so much about her not being able to take a breath, that within four days she was completely on her own with room air.”

Petra remained in the neonatal intensive care unit for 71 days. She was completely healthy, overcoming all the odds stacked against her, being a premature baby. Today she is a happy and healthy toddler who loves reading and playing the piano. She will turn two in April.

“I enjoy sharing her story because PPROM is responsible for 30 to 40 percent of preterm births, and impacts 150,000 women in the U.S. every year so it is something that touches a lot of people,” said Staycie. 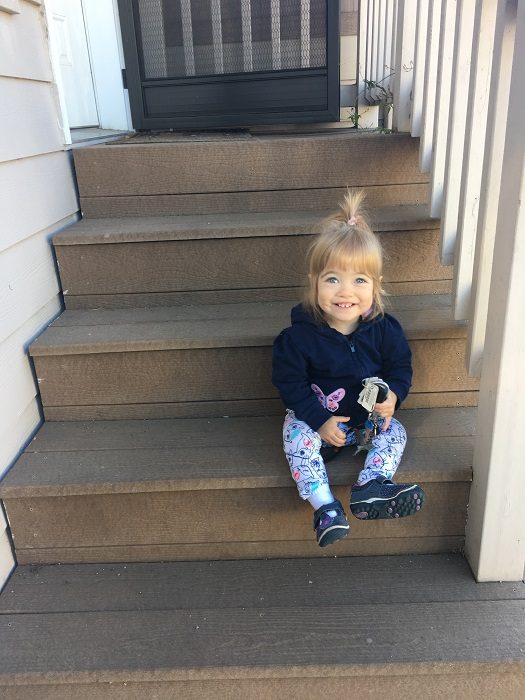 Petra is doing well since her premature birth and will turn two in April. Photo courtesy of Staycie Kirkendall.

Since going through the experience, Staycie Kirkendall has researched the bioethics in cases of chorioamnionitis to learn more about what women who develop this infection can do. Dr. George Delgado, MD, the medical director of Culture of Life Family Services, spoke with Staycie on an episode of Catholic Answers. He said that with cases of chorioamnionitis, on very rare occasions, women choose antibiotics to treat the infection, but it isn’t very effective. The current medical practice is to empty the uterus.

“[…] Our current state and knowledge of practice is that really the only effective treatment for chorioamnionitis is quote “emptying of the uterus” because it’s analogous to an abscess,” Dr. Delgado stated, adding:

An abscess, of course, is a pocket of infection. An abscess, to be successfully treated, really needs to be drained. It needs to be emptied out. [… ] And so having the treatment of emptying the uterus, or a D&C as they would call it, would actually not be considered a direct abortion…. In [the case of direction abortion], the emptying of the uterus is not a direct treatment for the disease.

Basically, rather than killing the preborn child through an abortion, doctors can deliver the baby and try to save both mother and child. If it is before viability when the infection occurs, everyone involved knows that there is a strong if not definite chance the baby will not survive. The difference is, they did not actively kill the baby and the baby’s death is not desired. If the infection is left alone, baby and mother will both likely die. In an attempt to save both lives or one of their lives, the baby is delivered – not actively killed. And if the premature baby is at the age of viability — babies are known to survive at 21 and a half weeks gestation — the doctors will do everything they can to save both the mother and the premature baby, not just the mother. Abortion is not necessary to save the mother’s life.

As a result of all she has been through, Staycie Kirkendall has decided to give back to women who are just beginning a similar journey. She remains an active member of the online support groups in order to share their story and be a source of hope for others. She also became an advocate for the PPROM Foundation. She offers mothers tips on how to manage life and stay sane through all of the challenges and unknowns of a difficult pregnancy and provides one on one support. She helps to remind moms of the group motto: “Where there is a heartbeat, there is hope.”