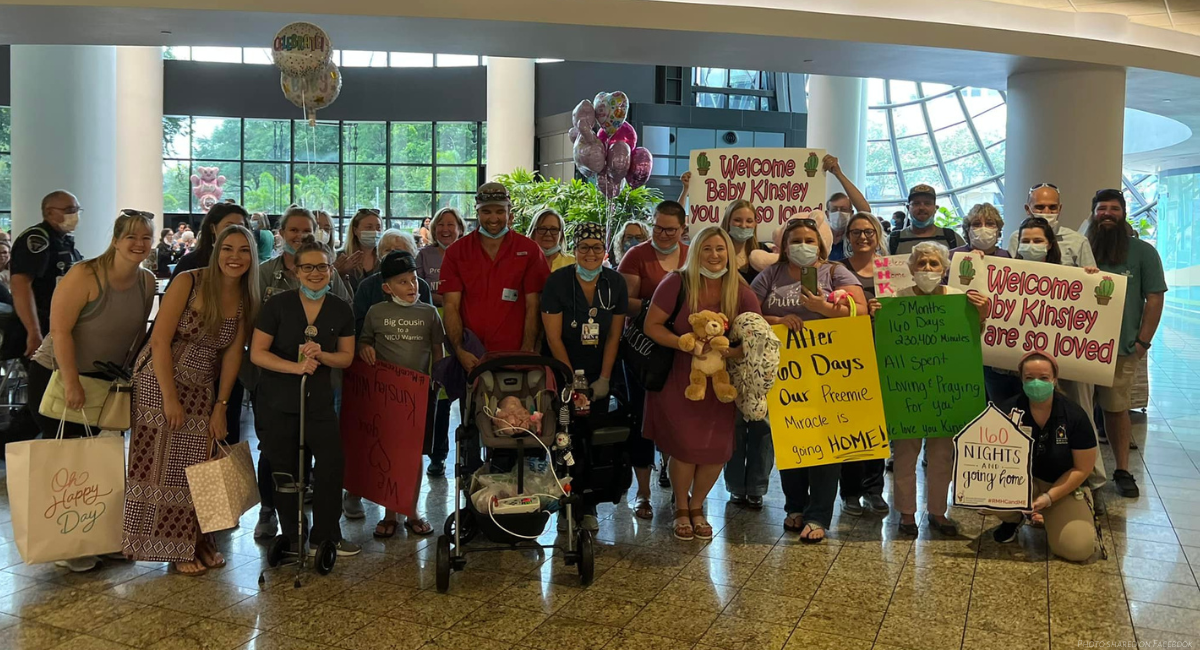 A premature baby born at 24 weeks and weighing just one pound is going home, after spending 160 days in the NICU.

Heather Yarborough was put on bed rest at 16 weeks pregnant, but according to the family’s GoFundMe page, had to be admitted into the hospital at 22 weeks after discovering that their daughter, Kinsley, was not growing properly. At 24 weeks, little Kinsley was born.

The journey for the Yarborough family wasn’t always an easy one. According to the Daily Mail, Kinsley was a twin, and her sibling passed away in the womb. Yarborough also suffered several miscarriages before Kinsley was born prematurely.

And yet, despite weighing just one pound, Kinsley started her journey outside of the womb in stable condition. Though luckily, there were no issues with brain bleeds, Kinsley had trouble with her heart and lungs, and battled several infections. Originally, Kinsley’s lungs were in such danger that doctors thought she might not make it, although the tiny fighter proved them all wrong. There were also struggles with her blood pressure, and eventually pulmonary hypertension, which was treated with medication.

A video of the moment Kinsley’s mom Heather and dad Shane got to hold her for the first time went viral and made international headlines.

Until recently, Florida law allowed babies to be aborted through “viability,” a virtually meaningless term, given the fact that babies as young as 21 weeks have survived when given proper medical care. This means preborn babies, the same gestational age and size as Kinsley, could be aborted at a time when they can almost certainly feel pain. Florida recently enacted a law restricting abortion to the first 15 weeks of pregnancy. However, human beings come into existence at the moment of fertilization and currently, the state does not protect the right to life of all preborn human beings.

Throughout her time in the NICU, Kinsley endured injections into her eyes and surgeries to repair hernias. By June, Kinsley had grown to five pounds, and was able to sleep in a normal crib; just a month later, at five months old, she had reached seven pounds. Soon after, she was finally able to go home.

“The secret is out! We are busting out of here!!!” Yarborough wrote on Facebook. “160 longs days with our little warrior!! Ready to be home and start our lives. Thank you to everyone who prayed for us and helped us out in need. Means the world to us! God is good!”

Yarborough further reflected on their NICU journey on Facebook, noting the beginning and end had a touching parallel.

“February 2nd, we walked into this Longhorn to get lunch before headed to Winnie Palmer for me to be admitted, not knowing what our future would hold,” she wrote. “Fast forward to July 17th, I’m picking up dinner from here for our last dinner before being discharged from Winnie Palmer with our beautiful warrior Kinsley!”