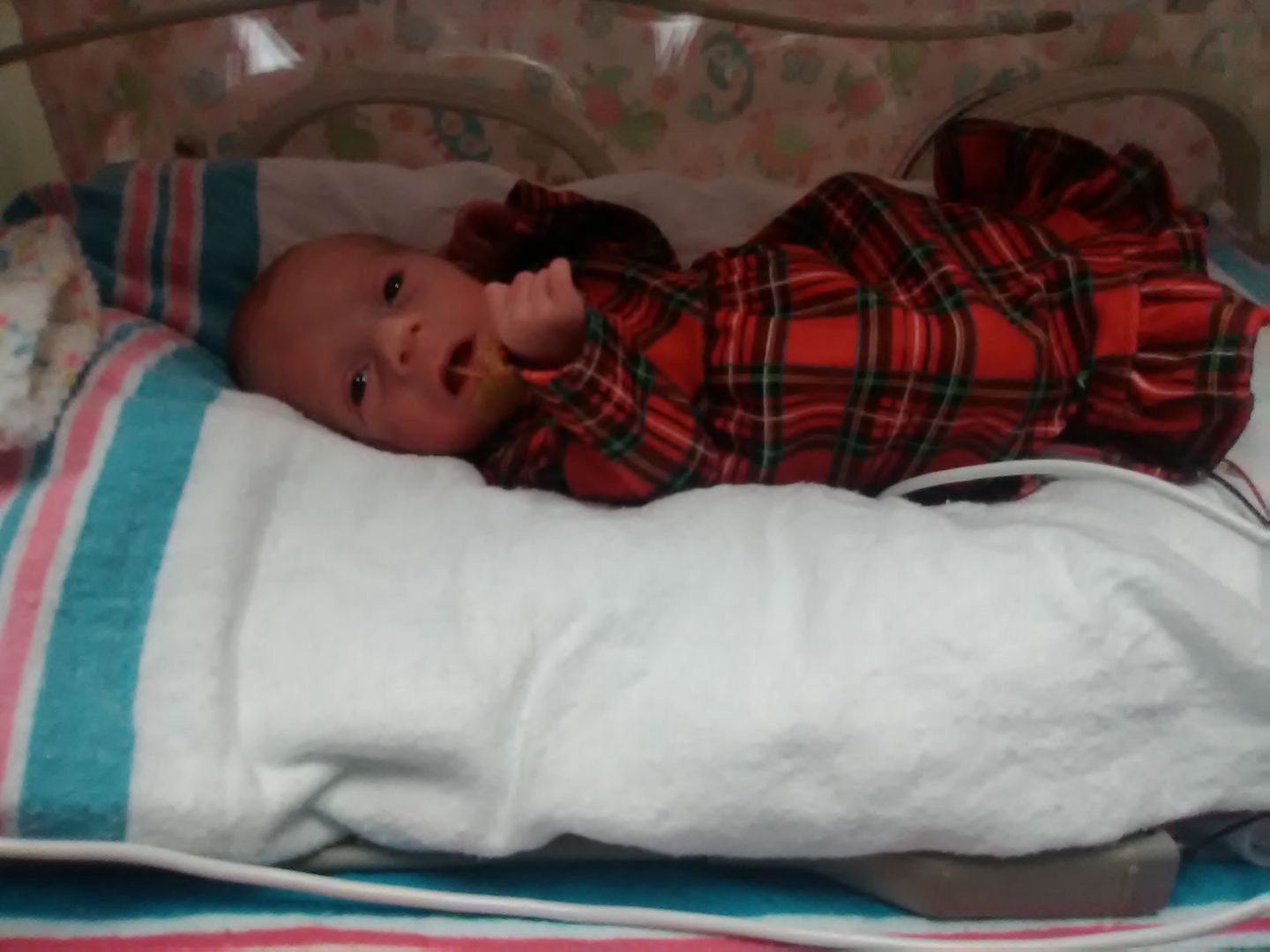 When Hannah Joy was born, she was premature at just 29 weeks, and she weighed less than two pounds, and her cry resembled a kitten more than it did a baby, her mom, Melody, told Live Action News. That tiny cry was a genuine miracle of life.

Melody and her husband John were overjoyed at discovering they were pregnancy with Hannah Joy. Their 20-week ultrasound confirmed Melody was carrying a healthy baby girl, and the life that was thriving inside of her made the daily vomiting and otherwise difficult pregnancy worth every moment for Melody, who had chronic hypertension. Unfortunately, it was only six weeks later, 26 weeks into her pregnancy, when she had to leave work with a horrific headache and fatigue, that her problems began. The likelihood of giving birth to a premature baby had become very real.

Hannah in the NICU at 29 weeks

READ: Premature babies get a new chance at life thanks to this amazing device

After seeing her blood pressure’s diastolic number was over 100 (stage 2 hypertension, and rapidly approaching emergency stages), she called her OB/GYN, who told her to come in. While they got her blood pressure under control after a few days in the hospital, it rose again shortly after she was sent home on bed rest, and she was sent from her hometown of Gadsden, Alabama by ambulance to the University of Alabama at Birmingham, over an hour away, where doctors told her she had severe pre-eclampsia and gestational diabetes. Melody said, “They told me that if they could not get my blood pressure down overnight that they would have to take the baby… I was very concerned about the baby and I prayed to God to help me.”

As they gave Melody steroid shots to mature Hannah Joy’s lungs in case of an emergency delivery, as well as IV magnesium to help prevent her from having brain bleeds, Melody tried to calm her fears:

I was afraid, but I prayed to God and starting singing the song “What A Wonderful Name It Is.” I knew my only hope was from God, and that He was the only one that could help me. I felt a peace as I was singing to God, and I heard Him speak in my heart that everything would be okay. Within thirty minutes, my blood pressure leveled out to a normal level. I was informed that I would be admitted to the high risk pregnancy floor there until the baby was born.

Melody’s hospital stay was made especially difficult by the distance. Her husband continued to have to work, so while he and her mom were both able to visit her, it was far more challenging than being in her own hometown. But that challenge was soon replaced with a new one:

And then suddenly, barely into the third trimester of development, Hannah Joy was out of the womb and into the world, just 29 weeks old and very premature. Melody describes the scary yet wonderful moment:

The c-section was very scary, because I was awake, although I was numb and could not feel them cutting me open. Then the most amazing thing happened: I heard a very tiny, faint cry from a very tiny baby. They rushed her to the NICU, and my husband went with them to be with the baby as they continued to sew me up. Hannah was put on a C-PAP machine with oxygen, [and] she was put under an ultraviolet light. She had wires all over her from head to toe. She had a central line put where they gave her fluids and lipids.

And there was more. Within a week, Melody noticed she was not producing breast milk, so they had to put a feeding tube in Hannah to keep her alive. “She ate that way until about 34 weeks gestation,” Melody said, pointing out, “At this time, she could wear doll clothes from Build-A-Bear.” Hannah was put in an incubator with a constant oxygen flow.

Later, when Santa came to the hospital to see Hannah Joy, Melody said, “It was amazing to see her respond to the sounds of his bells.” 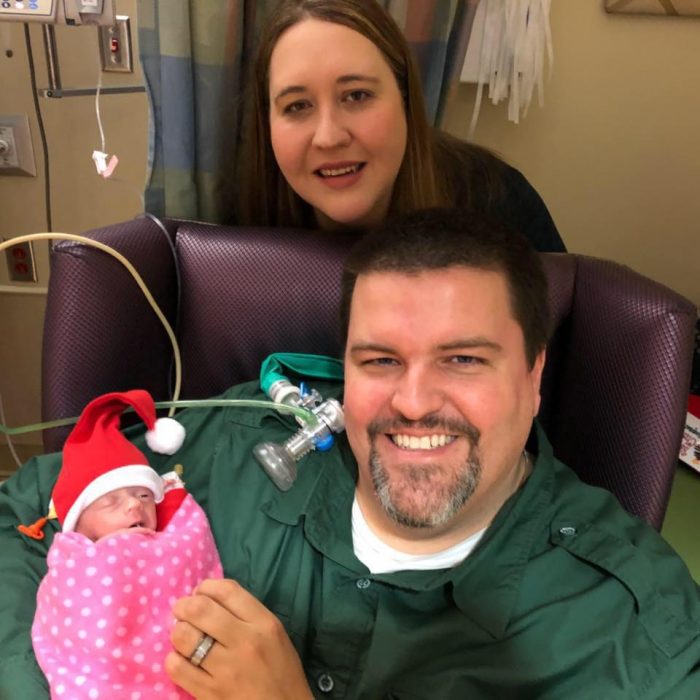 Christmas in the hospital

“She was my miracle baby!” Melody said. “She was 34 weeks gestation when she listened to the sound of my voice and the voice of all around her. She was perfect with five tiny fingers and five tiny toes. She was a complete person. People now [talk about aborting] babies all the way up to birth. I can’t imagine how these babies must feel. I am sure the process is very painful for them.”

READ: Born at 21 weeks, this preschooler is the most premature baby to survive

Hannah had a few hurdles to overcome. She was put on oxygen until she was 10 months old. She had to see physical therapy due to some developmental delays with motor skills, and just graduated from the pulmonologist. When she was born, her lungs were underdeveloped due to being born so early; now, she is breathing at 98-100 percent oxygen level on room air. God has done a miracle with healing her lungs! She is overcoming every hurdle because of prayer, and because of the Lord God touching her. I hope this story encourages those who may be facing having a child with delays or who may be struggling with circumstances in their lives that seem unbearable. I hope they decide to keep their baby, because they are truly a miracle and blessing from God. Hannah Joy is just that. She is a gift of grace and a joy to all she meets! 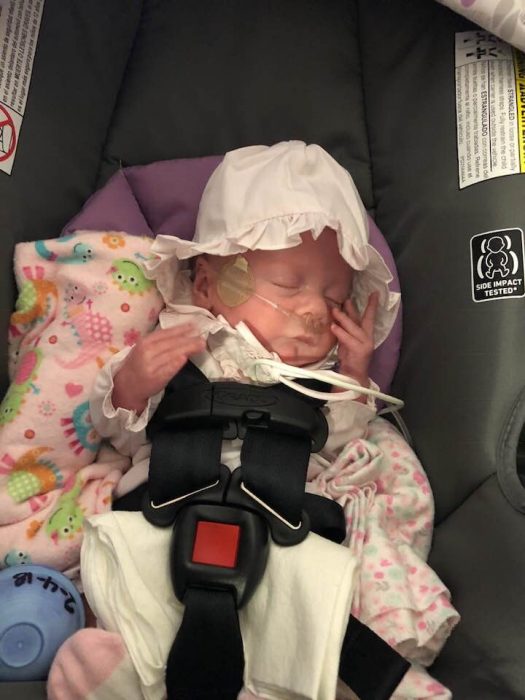 Going home after 2.5 months in NICU

Hannah Joy’s story is one of many stories of a babies premature, born well before many believe babies are even viable, and yet because of today’s excellent medical care, they not only live, but thrive. Today, Hannah Joy is a happy, healthy little girl who very much knows she is loved and wanted.