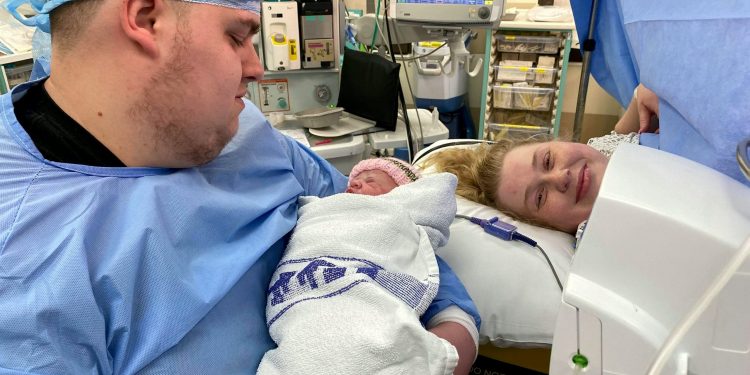 A mother who learned she had cancer when she was 16 weeks pregnant refused abortion and is now cancer-free.

In April 2019, Ellie Whittaker suffered the miscarriage of her first child. Two months later, she found a lump in her neck and then she and her fiancé Kieran Marriott discovered they were expecting again. A scan and biopsy led to a diagnosis of Hodgkin’s Lymphoma, and an MRI scan showed that her cancer was at stage two and that she would need chemotherapy. Doctors advised her to abort her baby and begin immediate treatment, as a delay in treatment would risk her own health. Bravely, Whittaker refused abortion.

“The doctor advised I have an abortion because cancer treatment could cause problems for the baby,” Whittaker said, according to the Daily Mail. “There was no way I was going to give her up so I chose to delay it.”

Throughout her pregnancy, Whittaker underwent scans every two weeks to monitor the cancer, with the plan of officially beginning treatment at 27 weeks, when the chemotherapy was less likely to harm the baby. However, she did so so well, doctors held off on treatments until after her planned C-section at 37 weeks.

On March 18, 2020, baby Connie was born weighing six pounds, 12 ounces, and her mother began treatment for the cancer, which had unfortunately spread. “I tried to spend as much time with Connie as I could before I started,” said Whittaker. “I remember crying and thinking I wouldn’t be able to be there for her. I knew the chemotherapy would take its toll. But when they scanned me the cancer had progressed to stage three — it had spread to my stomach and spleen.”

Whittaker underwent 12 rounds of chemotherapy, to which she responded well. In October of 2020, she learned she was cancer-free and doctors are optimistic that the cancer will not return. “I lived with it for so long it’s weird that it’s finally gone — I can’t believe it,” she said. “Everyone’s supported me in many ways. I had to wait two weeks for the results from my final scan which was agony. I’m so pleased it’s gone and I can focus on being a mum.”

A series of studies, including two published in The Lancet and Lancet Oncology, revealed that children born to women who received chemotherapy while pregnant had normal development, including normal IQ, hearing, and heart function. Though there are different types of chemotherapy for different types of cancer, this suggests that women may not have to choose between their own health and the lives and health of their preborn children when facing cancer during pregnancy. Regardless, anyone facing this situation should speak to their doctor and seek a second opinion as needed to ensure the best outcome for both mother and child.

“There was no chance on this planet I was going to abort my baby,” said Whittaker. “I pushed the cancer as far from my mind and focused on Connie — I couldn’t wait to be a mum.”

She added that Connie is “an amazing baby” and that she “wouldn’t change her for the world.”