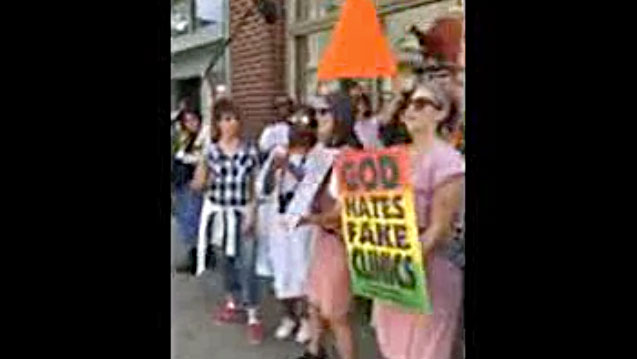 Actually, “single-handedly” might be an overstatement, since Marcus, his 2-year-old son, was there too, playing a vital role in an exchange caught on video and made public by comedienne Lizz Winstead—the co-creator and former head writer at Comedy Central’s The Daily Show.

These days, Winstead is leading a multi-state crusade called “Exposing Fake Clinics,” aimed at smearing pregnancy centers online and in person. Pittsburgh was the campaign’s first stop, with Winstead sending in a fake client and her fake boyfriend into a Women’s Choice Network location Monday ahead of the scheduled Tuesday protest.

Ironically, it was the fake boyfriend who fielded Michael’s questions. Their exchange was priceless.

“This little guy wouldn’t be here if not for that [center], you know what I’m saying?” Michael said.

“They lie to women,” the pro-abortion actor responded. “They give them all that type of false information about abortion and tell them that it causes breast cancer and then go through all this emotional stuff… If a woman wants to terminate her pregnancy, that’s her own option.”

Growing impatient, Michael put his hand on Marcus’ head and cut the actor off mid-sentence.

“What’s going on here? What type of demonic stuff they got going on here?” Michael said. “My son was almost an abortion, but we didn’t have it. He’s here right now—look at him.”

After the pro-abortion actor repeated his rehearsed line about abortion access, Michael picked up his thought and continued to tell his story.

“I was scared bro, when I first came, I was scared, but he changed my life,” he said.

It didn’t get any better for the pro-abortion actor, who tried again to portray that pro-life centers such as Women’s Choice Network pose a dangerous threat to women.

Winstead, who posted the live video to her Facebook page Tuesday, was visibly rattled by the exchange. Prior to the confrontation, she and her fellow rally attendees were basking in the glow of what they perceived as a victorious “undercover” visit to a Women’s Choice location from a day earlier.

But her confidence wilted next to a flesh-and-blood testimony of a man and his son whose lives have been so deeply affected by the very pro-life outreach she is leading the charge to oppose.

“It’s not risky,” Winstead—who has no medical training whatsoever—asserts. “It’s easier than getting your wisdom teeth pulled.”

For its part, Women’s Choice Network, a four-location pregnancy help organization serving Pittsburgh women and families since 1985, are seeing more women and men reached and rescued from abortion than at any point in the life of their ministry.

That success has already led to opposition online as recently as March 2017, when Planned Parenthood staffers posted a batch of negative reviews on Women’s Choice Network’s Google Local listing.

The latest round of opposition comes as part of Winstead’s “Exposing Fake Clinics” campaign, which launched Monday and goes through July 26. While it has gained relatively little traction, the campaign’s intention is to bring down pregnancy centers’ reputation with negative online reviews and scheduled protests at pregnancy centers in at least six states.

Amy Scheuring, executive director for Women’s Choice Network, is hosting a conference call through Heartbeat International on Thursday, open to all pregnancy help leaders, to make center directors aware of how they can respond to online and on-site opposition.

“These were people that were paid to be there,” Scheuring said. “They were playing their part, so what are you going to do with that? This is clearly not about Women’s Choice Network. This is not about a little non-profit here, it’s about a bigger agenda.”

Responding to a Truth-less Attack

As Winstead and Co. work to malign pregnancy centers online and on-site, leaders in pro-life online marketing are encouraging centers to take a fresh look at their online presence—paying particular attention to their Google Local listing.

Though nothing can be done to prevent a negative review from being posted to Google Local, one or two low ratings can be overcome in a hurry, Extend Web Services’ Tim Stephens said.

“The best offense is a good defense,” Stephens said. “Get as many positive reviews from as many legitimate sources as you possibly can. These sources can be clients, donors, volunteers, or anyone outside of your staff and board members who’ve had a positive experience with your center. These reviews should be posted in the most prominent locations online (Yelp, Google, Yahoo, Facebook).”

Brad Mandel, president of AdAmerica, also encouraged centers that may be hit with negative online reviews to challenge the review itself, noting that he has seen multiple reviews removed because they violated an online listing policy.

“If the review is an obvious fake, you can request Google, Yelp, Yp.com or FB to remove the review and in the interim, respond to the review.” Mandel said. “The response from the owner of a listing is meaningful, people read that.  We recommend getting five good reviews to push down the negative one ASAP.”

“Big Abortion was into ‘fake news’ long before this current political season,” Godsey said. “They’ve lied about the impact of abortion and now they’re lying about those dedicated to helping women have life-affirming options.”

Editor’s Note: This article was originally published at Pregnancy Help News on July 19, 2017, and is reprinted here with permission.