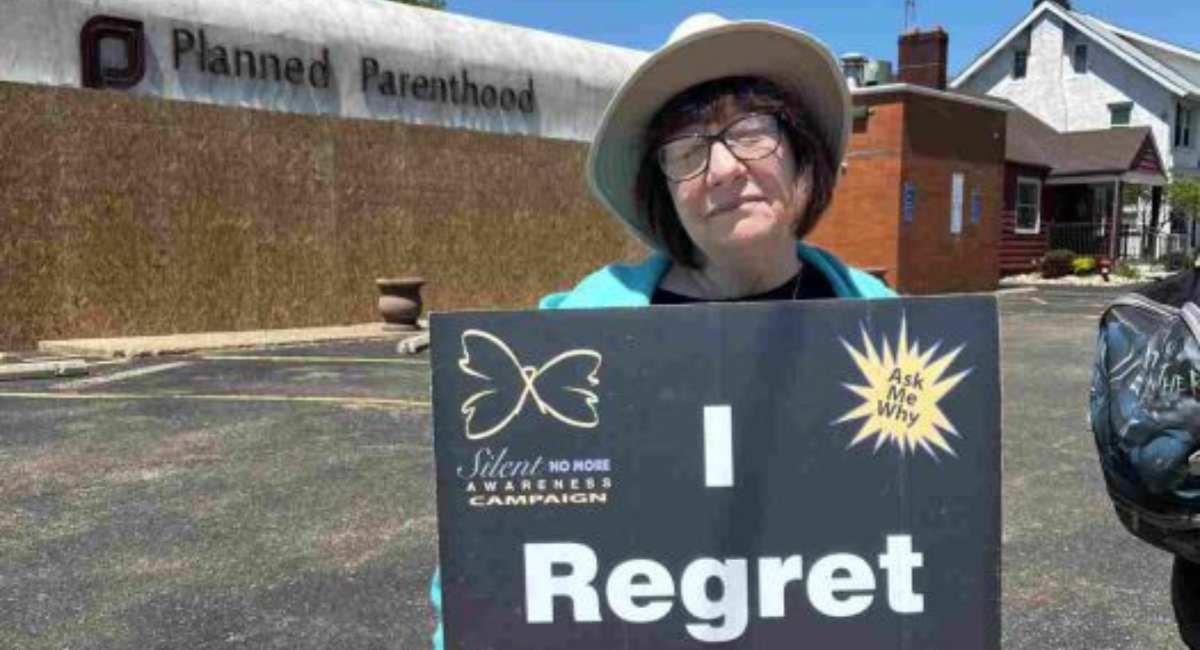 She was just 16 years old, afraid, and confused when a Planned Parenthood counselor informed Christine “Christy” Ballor that she was 10 weeks pregnant and that her baby just resembled a “blob,” or a “tiny tumor.” The counselor told Ballard she would not have to tell anyone she had an abortion and could move on with her life – carefree as if nothing ever happened. She needed to decide quickly, though, because at 12 weeks gestation, the cost for the procedure would increase.

Ballor told Live Action News, “Being an unwed mother in 1972 was an embarrassment. My greatest fear was shaming and disappointing my family who already disapproved of my older boyfriend so it was very appealing that I could have the abortion without ever having to tell my family.”

When Ballor told her boyfriend that the Planned Parenthood counselor had encouraged her to schedule an abortion, he was noncommittal, telling her it was solely her decision on whether to do so. With that response, Ballor told him she would have the abortion, sensing he had no interest in shouldering the responsibility of fatherhood. He offered to pay for her travel to New York to have the procedure.

“While abortion wasn’t illegal in Ohio in 1972, there were no abortion facilities available, so my boyfriend paid for the air travel to New York and went with me,” she explained. “But I had to pay for the abortion from my Christmas and birthday money. To avoid suspicion, I told my mom I was going to stay at a girlfriend’s house for the weekend.”

Upon arrival in New York, Planned Parenthood sent a station wagon to the airport to transport girls who traveled there for abortions to the facility. Ballor’s boyfriend appeared relieved when told he had to wait at the airport. As she climbed into the car, Ballor recalls imagining her boyfriend running after her begging her not to go through with it. But as the vehicle began to move forward, Ballor realized there was no turning back.

Ballor said, “I suddenly felt like I was moving along a conveyor belt with other silent, sad, and hopeless women. From that point, I simply moved like a robot through the process, suppressing any thoughts and feelings. Looking back, I really didn’t need the sedative they gave me; my mind was already sedated with hopelessness.”

Once inside the cold, sterile room, Ballor tried hard to tune out the sounds and smells. She vaguely remembers the abortionist telling her, “Relax, this won’t take long.” Shortly afterward, he left as silently and as quickly as he had entered. In the recovery lounge, sounds of weeping permeated Ballor’s consciousness and she felt her own tears sliding down her cheeks as she realized her baby was gone forever.

“I never felt such emptiness and despair in my life,” Ballor said. “I had been deceived into thinking my baby was just a blob of tissue. But I immediately wiped my eyes, gritted my teeth, and told myself not to cry because I had chosen to do this. Nothing could bring my baby back. I vowed to pretend this never happened. So, I walked out of that place of death and despair the same way I walked in, like a robot going through the motions. I lived in denial for a long time.”

Shortly after the abortion, Ballor’s boyfriend left her for another girl.

As she tried to live normally while harboring a dark secret, Ballor went to college and became an elementary school teacher. She loved children and had always dreamed of being a mother with a loving family. But all the relationship choices Ballor made after the abortion kept her from fulfilling her dream. Deep inside, she believed she didn’t deserve happiness, subconsciously attracting men who treated her callously. After ending one physically abusive relationship, Ballor’s ex-partner broke into her apartment, raping her at gunpoint.

Ballor said, “As horrendous as that experience was, it was far less life-altering than the abortion was. Perpetrating violence is far worse on a person’s soul than being a victim of violence. That is why abortion is never the solution to rape that people think it is.”

READ: Rape survivor: ‘Every woman is strong enough’ to choose life instead of abortion

Years later, Ballor was on a destructive path of promiscuity, smoking, and abusing alcohol and drugs, hoping to keep her demons at bay. One night, she decided it was time to end the denial and hopelessness she had been living with. With a bottle of tequila in one hand and another holding a fistful of Seconal, she fell to her knees sobbing while desperately calling out, “God, if you exist and if you think my life is worth anything anymore, please, please help me!”

She then said, “The answer pierced my soul not in words but in the form of an instant knowledge that I was loved by an indescribable, unfathomable love that seemed almost impossible. I felt wrapped in a warmth and peace I cannot describe. Yes, God loved me, and my life had meaning. My parents had not provided a religious upbringing, so I would spend three decades searching to know this God who told me He loved me.”

Like many post-abortive women, Ballor still struggled to forgive herself, but she had found hope in a merciful God. At 34, she met a caring man with whom she bared the secret she kept hidden for so many years. Ballor said, “He just wrapped his arms around me and held me while I cried. I knew I had finally found the man I could trust for the rest of my life. We married after 11 years of togetherness.”

Sadly, fear of becoming pregnant while engaging in casual sex had propelled her to undergo a tubal ligation. She would never have the family she had desired.

Finding healing and purpose in faith

During her marriage, Ballor continued to struggle emotionally, surprising her husband and herself with outbursts of intense anger at small, everyday annoyances like a malfunctioning dishwasher. Realizing she need help, she consulted a friend’s Catholic priest who suggested she contact the local pregnancy center to volunteer. There, she met another post-abortive woman who invited her to participate in the abortion healing program, “Heart.”

“Peeling back the layers of grief, guilt, and shame that spanned so many years was difficult,” Ballor said, “But I finally found the peace and forgiveness that Jesus had intended for me. God revealed I had been pregnant with a son and in memorializing him, I named him Tommy after the father I adored and lost as a little girl.”

God had a plan for Ballor’s life: she joined the Silent No More Awareness campaign, giving her testimony with others on the steps of the Supreme Court. She now volunteers as regional coordinator for Ohio. Additionally, she helped facilitate a Rachel’s Vineyard Retreat and volunteers with the International Helpline of Concepts of Truth. She also serves on the board of the Alliance Pregnancy Center in her hometown.

Ballor said, “God has given new purpose to my life, a way to redeem my suffering and to honor my son’s life. Now, I am currently awaiting God’s next calling to follow His will and do His work out of thanksgiving for saving me from myself. Amazing is His Grace!”