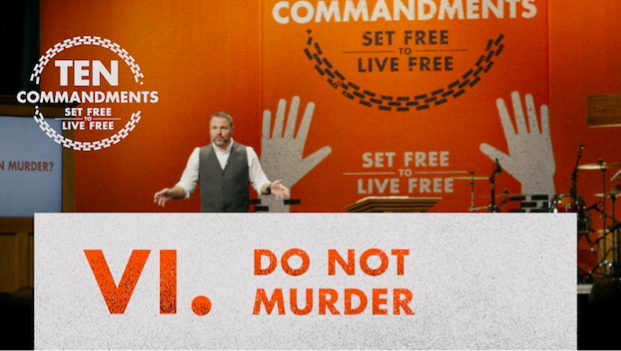 Last week, Live Action highlighted a bold op-ed by Mark Driscoll, pastor of Mars Hill Church in Seattle. Driscoll, writing for Fox News, discussed the illogical state of laws in the U.S., where unborn children are protected from being killed by everyone but their mothers. Driscoll painted a picture of just how many people we are missing because of abortion – 55 million in the U.S. alone.

Setting an example for pastors and other religious leaders, Driscoll wrote:

Abortion is not a matter of politics. It’s a matter of life and death, for 55 million and counting. Enough.

You shall not murder.

Well, if you thought Driscoll’s op-ed was hard-hitting and timely, you ain’t heard nothin’ yet. On Sunday, October 20, Driscoll followed up his op-ed with a sermon for his congregation. In the middle of a series about the Ten Commandments, this sermon hit on “Do Not Murder.”

You can watch or listen the sermon in its entirety here or read a transcript here, and you really ought to do one of these. Driscoll covered the issue of abortion in great depth, thoroughly reaching into the core of the issue. Here are a few of the points he drove home:

1) “The issue is not choice; the issue is murder. Don’t let semantics confuse you.”

Driscoll read a quote from Princeton professor Robert P. George, a former member of the President’s Council on Bioethics:

Human embryos are not some other type of animal organism like a dog or a cat. Neither are they part of an organism like a heart, a kidney, or a skin cell. Nor again are they a disorganized aggregate, a mere clump of cells awaiting some magical transformation. Rather, a human embryo is a whole living member of the species, Homo sapiens, in the early stage of his or her natural development. Unless severely damaged, or denied, or deprived of a suitable environment, a human being in the embryonic stage will, by directing its own integral, organic functioning, develop himself or herself to the next more mature development stage, i.e., the fetal stage. The embryonic, fetal child in adolescent stages are stages in the development of a determinate and enduring entity, a human being, who comes into existence as a single-celled organism, called a zygote, and develops, if all goes well, into adulthood many years later.

As Driscoll said, “[i]t may be a little person, but it’s a person made in the image and likeness of God, and every mother who’s had an ultrasound knows this.”

2) The Bible demonstrates with great clarity that the unborn are people in the eyes of God.

Driscoll gave “seven reasons why life begins at conception” from the Bible. (Go to the transcript and read through them; they’re excellent.) Here are two excerpts:

I can’t think of anything sanctioning life and the rights of the unborn more than God becoming a baby, God entering into human history—God could have entered into human history any way that he chose, but the eternal God entered into history and he chose that his entrance would be through the womb of a mother, that he would grow up as a child as we do. This is where Jesus identifies with the unborn and the preborn.

3) Exodus 22 proves the value and equality of the unborn.

Pro-choice advocates sometimes like to use Exodus 22 as supposed proof that the Bible does not view an unborn child as equal to a born child. This is the passage where some mistakenly claim that a woman has a miscarriage after being attacked. In fact, as Driscoll pointed out, the Hebrew word indicates that the baby in this passage is born prematurely, not miscarried. And, if the baby dies, Exodus 22 requires a life for life. Nothing could be more equal.

4) A mother has no more right to kill her child than anyone else.

Driscoll talked about the case of Remee Lee and John Andrew Weldon, where Weldon deceived Lee into taking an abortion pill and ending the life of her unborn child. Weldon faces murder charges for what was perfectly legal if only Lee, the mother, had chosen it.

I’m particularly perplexed by this rarely used Federal Unborn Victims of Violence Act. Yeah, you’re not kidding, it’s rarely used. See, if the woman would have taken the pill and murdered the child, we would have had a parade, but because the man tricked her and gave her the pill, we sentence him to prison for thirteen years.

My question is, was it murder or not? If it was murder, then it doesn’t matter who murdered. It’s still murder, and I agree with the decision, and I’m praying for the woman. Her baby was murdered by her boyfriend, the child’s father. He’s a murderer, but he’s not alone.

5) “Jesus died so that murder could be forgiven.”

For those of you who are murderers, not just pro-choice advocates—words matter. For you murderers, you men who have driven girlfriends or wives to the clinic, you men who have encouraged, forced, or paid for the abortion, you women who have killed your own child, murdered your own child—some of you are murderers, and some of you are accessories to murder—the good news is that Jesus died for murderers, that Jesus was murdered, that no one is more innocent than Jesus. The unborn are absolutely the most innocent human beings, but Jesus, the perfect, sinless Godman—completely innocent. And he went to the cross, and he was murdered. And one of the things that he said as he was being murdered was, “Father”—what? “Forgive them.” Jesus forgives murderers, Jesus forgave his own murderers, and Jesus died so that murder could be forgiven.

So for those of you ladies who are here, and you’re holding back tears, and this is a traumatic moment, and you feel like I’ve dropped a bomb on your life, you’re a murderer, and Jesus forgives murderers. So you need Jesus, and you need him to forgive you for your murder, and he will.

For some of you who have a very tender conscience, I assure you my goal today is not to beat you up.

6) There are real meanings behind the words we speak – and the excuses we give.

Driscoll touched on several of the common reasons given to support abortion (and again, his sermon bears reading in its entirety to get the full picture). He painted a picture of what these “reasons” really mean:

We did a series of studies across the US that I’ve been reading the transcripts for, and on the issue of abortion, it was pretty horrifying to read, because in one city, it literally was just said, “Well, of course we need abortion. What are we going to do with all those people who have Down syndrome?” The assumption is we’ll just kill them all. Do you see the haughty arrogance in that? See, because we are the way people should be, they are not. That’s a huge assumption. There are plenty of people who don’t have Down syndrome who act like animals and are not a real blessing to the rest of us.

Mark Driscoll also revealed that he’s known multiple couples who have been told their babies would be born with Down syndrome, only to find out that the babies were born without it. He discussed how couples are often given inaccurate information about their babies, simply so the doctor won’t be sued later on. He also stated that cases of rape and incest should be dealt with “lovingly, prayerfully, biblically, considerately, patiently, affectionately.” He talked about how single people need to be sure to marry pro-life people. Driscoll discussed the great harm and agony abortion causes women. And he uncovered the guilt of men who participate.

It’s a hard-hitting, bold, and dead-on read. This pastor clearly lays out the case that abortion is the same as murder. And it’s entirely wrong and unjust. It should never be a “choice.”

But, in the end, Driscoll closed with a message of hope for those who have already participated in abortion. For all the death and sin that there has ever been, there is forgiveness:

And among his [Jesus’] final words were, “Father, forgive them.” Jesus died so that murderers could be forgiven and changed. And he rose, conquering death, that God’s final word was not murder but resurrection.