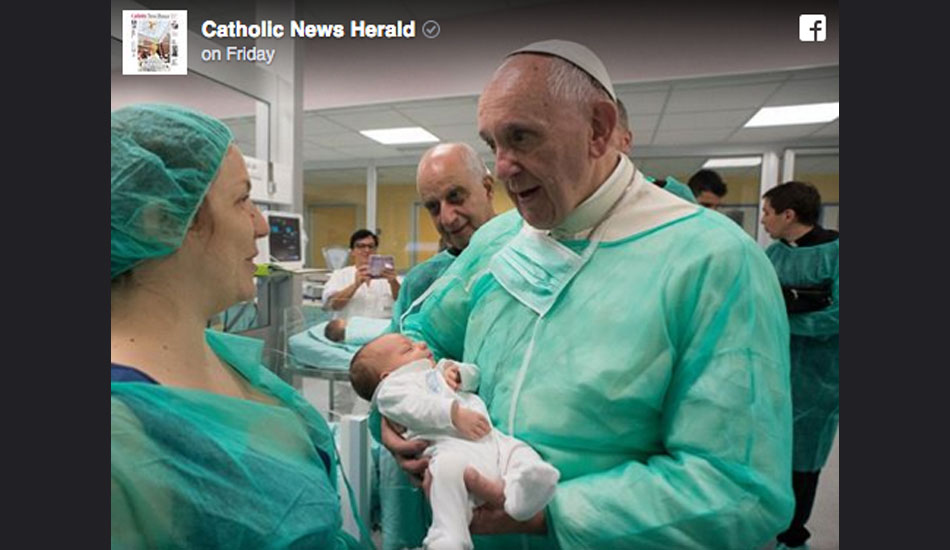 On Friday, Pope Francis continued his trend of acknowledging the value of life at all stages via a surprise visit to the neonatal unit, as well as the emergency room, at San Giovanni hospital in Rome.

Catholic News Agency reports that there are currently 12 babies being cared for at the neonatal unit, five of whom are in “very serious condition,” including a set of twins. Pope Francis reportedly spoke to each of the babies, as well as parents, offering words of comfort and encouragement. He wore a mask and followed other sanity procedures in order to protect the babies, some of whom may have weak immune systems.

But the Pope didn’t stop there. Later on Friday, he visited some thirty terminally ill patients at Villa Speranza Hospice in northern Rome. According to Catholic News Agency, he greeted each patient one-by-one, as well as the patient’s family members, in what was no doubt a positive, once in a lifetime experience for many of them.

The Pope’s appearances were a continuation of his “Mercy Friday” trips, in which he has visited various facilities including a drug and alcohol rehab center, a home for sick and elderly priests, and a community of women rescued from prostitution. The Vatican explains that through Friday’s visits, the Pope “wanted to give a strong sign of the importance of life, from its first moment to its natural end.”

“The acceptance of life and the guarantee of human dignity at all stages of development are lessons repeatedly stressed by Pope Francis,” the Vatican continued, adding that the Pope’s day of caring for those in need is a “concrete and tangible sign” of how we should all look out for “those in the most vulnerable and precarious situations.”