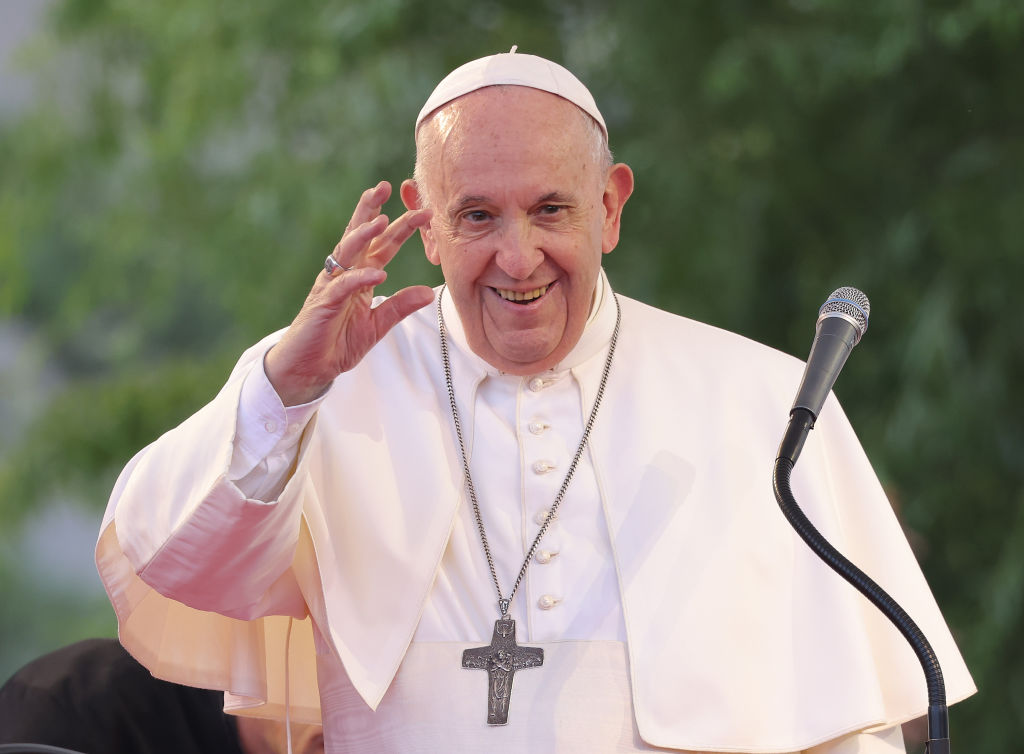 Pope Francis spoke to reporters this week about the recent controversial discussions regarding denying communion to President Biden and other Catholic pro-abortion politicians. On a return flight from his trip to Hungary and Slovakia, Gerard O’Connell of America Magazine (published by the Jesuits in the U.S.) asked the Pope about abortion and communion. Noting that Pope Francis has described the Eucharist as “not a reward for the perfect but a medicine and food for the weak,” O’Connell asked what his response was to the conversation surrounding denying abortion-supporting politicians communion.

Pope Francis explained that receiving Jesus in the Eucharist requires the recipient to be part of the community. “[T]hey are out of the community – ex-comunitate – excommunicated they are called,” he said. “It is a harsh term, but it means that they are not in the community, either because they do not belong to it, they are not baptised or have drifted away for some reason.”

He then went on to address the issue of abortion.

“Abortion is more than a problem. Abortion is homicide. Abortion… without being ambiguous: whoever has an abortion kills,” he said, and after explaining some facts about fetal development, added, “It is a human life, period. And this human life must be respected. This principle is so clear, and to those who cannot understand, I would ask two questions: is it right to kill a human life to solve a problem? Scientifically, it is a human life. The second question: is it right to hire a hitman to solve a problem?”

Pope Francis continued, “Don’t ask strange questions. Scientifically it is a human life. Books teach this. I ask: is it right to throw it out to solve a problem? That is why the Church is so hard on this issue, because it’s a little like if she were to accept it, if she accepts this, it would be like accepting daily murder.”

People who undergo an abortion, commit an abortion, or aid someone in getting one are automatically excommunicated from the Catholic Church, meaning they may not receive the Eucharist. But Pope Francis stressed that pastors should continue to minister to such people. “An excommunication is enough, please let’s not make more excommunications,” he said. “The poor people, they are children of God and they want and need our pastoral closeness. Then the pastor resolves things as the Spirit tells him.”

Throughout the year, there has been controversy over the United States Conference of Catholic Bishops (USCCB) potentially denying pro-abortion politicians communion. The USCCB merely published a document meant to teach the Catholic faithful about Church doctrine on abortion and the Eucharist — yet this led to attacks from pro-abortion media as well as pro-abortion lawmakers, though the Catholic Church has never wavered in her condemnation of abortion and support for life.