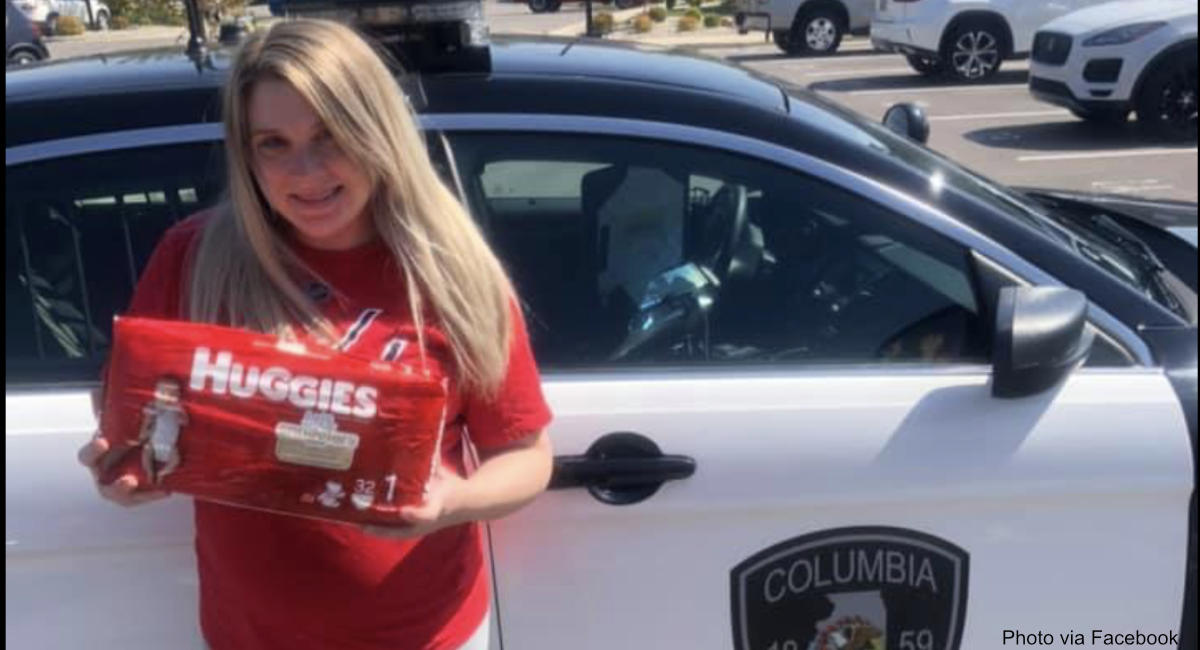 On April 25, Kelly Augustine called police officers to her home in Illinois after a thief stole more than $500 worth of diapers and baby wipes that had been gifted to her and her husband, Logan, by friends and family. The police officer who arrived to help her went above and beyond the call of duty.

Officer Tyler McWhorter said Augustine was crying when he arrived. Just weeks away from her due date, she was heartbroken that someone had gone into her car to steal the baby gifts that had been given to her. Her husband was away on a military assignment and she was too far along to carry the boxes up the stairs of their apartment building by herself, so she left them in the car overnight.

“She was standing outside near her car when I arrived,” McWhorter said, according to The Pantagraph. “She was distraught. She told me she was a week or two away from her due date and the diapers that family members and friends had bought for her and her husband’s baby had been removed from her car by some unknown person. She feared the car had not locked properly due to a sometimes malfunctioning locking mechanism.

“She said she went out to the car at 11:30 p.m. and everything was there. She is about to have her baby and someone took all of her diapers. I just wanted to do something for her.”

With no leads into who had stolen the items, McWhorter left Augustine’s home and headed back to police headquarters, where he rallied his colleagues. He asked them to “wear their hearts a little bigger than their badges” and help him do a good deed. “I asked them if they wanted to donate some money to buy her some more diapers,” he explained. “No problem — the co-workers were all in.”

He returned to Augustine’s home — she thought it was to photograph her car. But he brought with him 2,000 diapers. This time, Augustine cried tears of joy.

“He said he wanted to help me any way he could,” she said. “He had gotten together with family and other people from the police department and they got diapers. Isn’t that crazy?”

McWhorter said he loves to help turn a person’s negative situation into a positive and helping a pregnant mother who had just lost hundreds of dollars in diapers is definitely one way to do that. “I feel like officers are doing this everywhere in small acts all the time and people just don’t know,” he said. “It’s a thing I’d like to believe most officers would do, not for the recognition, per se, I just believe it’s the right thing to do.”

Residents of the community followed his lead, and donated diapers along with other baby supplies to Augustine through the police department. Augustine and her husband welcomed baby girl Claire on May 15.

Every day, pro-life pregnancy centers give diapers and other baby items to women free of charge. They also help women with maternity clothes, housing, access to medical care, and more. Yet, abortion proponents are working overtime to silence these pro-life centers because they don’t offer abortion. Sometimes, the difference between a woman choosing life or feeling that she has no choice but abortion is a small act of kindness and the knowledge that she isn’t alone.