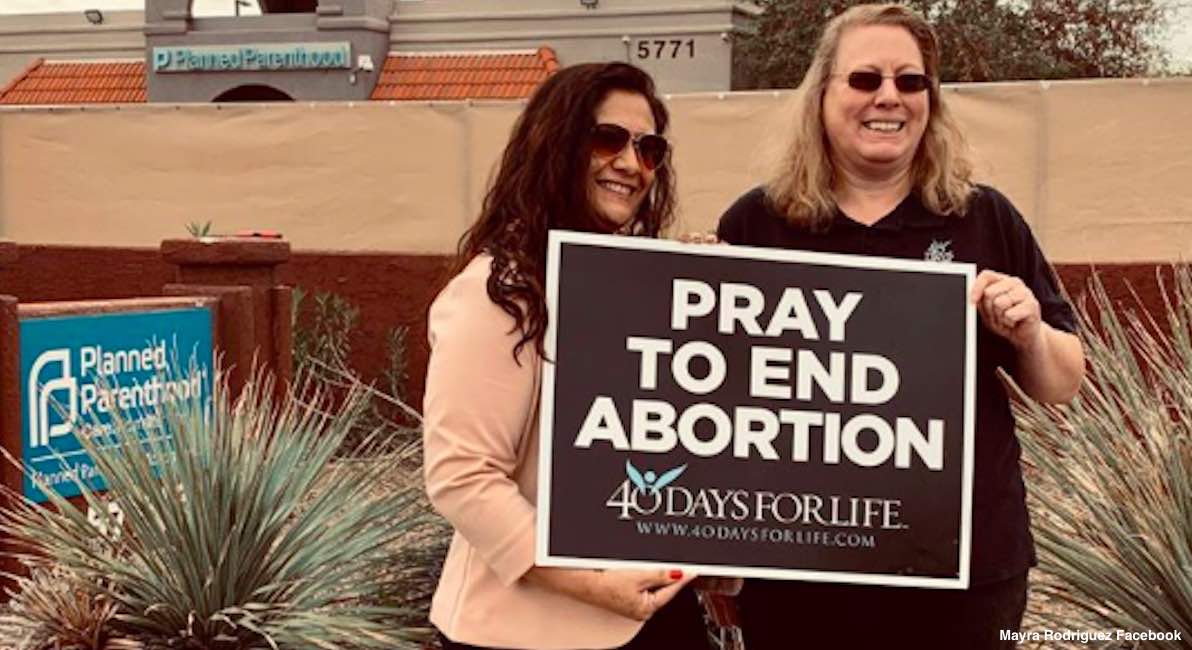 Former Arizona Planned Parenthood facility director Mayra Rodriguez was fired after 17 years of employment when she attempted to reveal several cases of botched abortions, employee abuse, and failure to report minority abortions and sexual abuse; she was then wrongfully accused of “mishandling narcotics.” Rodriguez filed suit against Planned Parenthood in 2017 and was awarded $3 million in compensation.

Then, on February 23, Rodriguez returned to the facility she used to run for the first time since 2016 — but this time, she was leading a 40 Days for Life prayer vigil kickoff. A press release detailing the vigil explains that while employed at Planned Parenthood, Rodriguez “witnessed critical safety and health-related violations including incomplete abortions, falsification of patient records, illegal conduct, unreported statutory rape, women severely injured by abortion and high complication rates with a particular abortionist.”

In a speech at the vigil, Rodriguez described the effect that prayer vigils have on Planned Parenthood facilities:

During 40 Days for Life, patient rates drop drastically, sometimes below 50%. The more people who pray on the sidewalk, the fewer women walk through those doors. Planned Parenthood wouldn’t fight so hard if they didn’t know you make a difference. Don’t give up; prayer works, I’ve seen it.

For Rodriguez, it was prayer that eventually revealed to her the true nature of what Planned Parenthood does to women and children. “I am here because of your prayers,” she said. Raised Catholic, Rodriguez recalled her mother lighting candles and praying each time Rodriguez would leave for her job at Planned Parenthood. The people she would see praying outside her facility attended the same Mass every week that she did. And yet, no one at her church said anything to her.

“Not once did anybody approach me in church and say, ‘Hey, we don’t want you here because you work for that place; we don’t want you here because you are killing babies,'” Rodriguez said in her speech. She knew the priest of her church recognized her, but he never told her to leave. “I can see now that he was praying for me when he looked at me the way he did,” Rodriguez remembered.

40 Days for Life, an organization started by Shawn Carney in 2007, coordinates 40-day prayer vigils around the world. The very first campaign in America stretched across 89 cities in 33 states. Since then, over 950 cities in 63 different countries have participated in 40 Days for Life campaigns, praying for an end to abortion. The campaigns consist solely of groups gathering peacefully in front of abortion businesses to pray for the women, men, and children impacted by abortion. Participants do not protest and they are non-disruptive. Thanks to the prayerful presence of participants, over 16,500 lives have been saved and almost 200 abortion workers, like Rodriguez, have quit their jobs. In addition to this, 106 abortion facilities have closed across the nation. Visit the 40 Days for Life website to find a campaign happening now in your area.