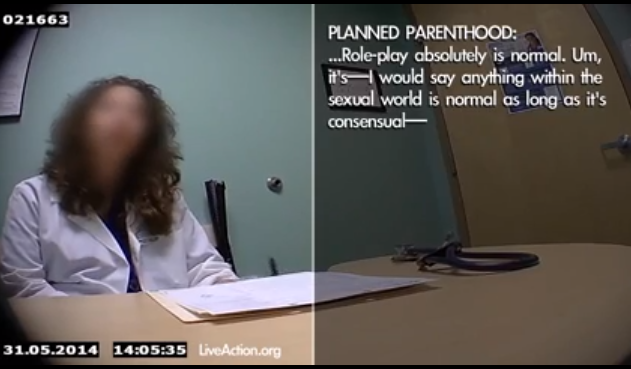 Live Action’s latest undercover investigation unravels Planned Parenthood’s startling sexology. Live Action’s new investigative video reveals how far the abortion-giant will go to promote questionable practices to teens, and how the organization’s rationale essentially condones any sexual activity among partners. Teenagers are not only encouraged to experiment with a slew of sexual practices, they are coached by Planned Parenthood staffers how to view pornography, obtain adult sex toys, and even defecate on each other for sexual pleasure. The organization’s sexual ideology caters dangerous and violent Fifty Shades of Grey-type BDSM relationships to youths as acceptable, “normal” practices based on personal preference.

Episode Four of Live Action’s SEXED investigative series takes place in Eden Prairie, a city in the Minneapolis-St. Paul metropolitan area. The footage reveals an employee encouraging an investigator, who told the worker she is 15, to experiment with alarming sexual activities. The counselor coaches the girl that sexual practices, including the use of horse whips and ropes to inflict welts and bodily pain, is not sexual abuse as long as activities are consensual among partners. In addition to offering advice on where to obtain adult sex toys, the Planned Parenthood counselor exposes the organization’s corporate sexual culture.

PLANNED PARENTHOOD: I would say anything within the sexual world is normal as long as it’s consensual—

Spotlighting Planned Parenthood’s questionable sexual ethos, Episode 4 details how the organization promotes the violent bondage sex popularized by bestselling erotica novel, Fifty Shades of Grey, to inexperienced teenagers. In the exposé, the Planned Parenthood clinician suggests several sexual experiments for the girl and her boyfriend to try, including the infliction of bodily pain, welts and rope burns.

PLANNED PARENTHOOD: —um, so there are lots of things that happen in “Fifty Shades of Grey” that border on—um, I wouldn’t say “abuse,” because it’s consensual, but definitely extreme. So there are things that—

PLANNED PARENTHOOD: —happen in “Fifty Shades of Grey” that are extreme. Now, if it’s consensual, again, completely normal. Um, uh, things that happen in “Fifty Shades of Grey” all center around pain, and your response to pain, and submission. And, um, there are lots of people in the public view that argue that that’s not a healthy relationship, and then there are people that argue that it is, and that it’s just—it’s between two people.

PLANNED PARENTHOOD: OK. OK. Um, have you—have the two of you been sexually active, like, in a normal way?

PLANNED PARENTHOOD: And how long have you been sexually active with him?

The inadvertent admission not only exposes that Planned Parenthood staffers are unsure of what constitutes normal sexual practices, but further delves into the organization’s radical “anything goes” sexology.

The staffer also mentions that Planned Parenthood patients have visited the clinic with welts and markings as a result of violent sex games, and refers the investigator to neighborhood adult sex shops to purchase sex toys.

“What else could an underage girl agree to that Planned Parenthood would call ‘completely normal’?” Rose said. “Cuts?  Broken bones?  Is child sexual abuse ‘completely normal’ if the girl thinks she wants it?  Planned Parenthood has covered up the statutory rape of minors for years as well, not taking child sexual abuse seriously.  Apparently it’s ‘yes’ to everything – to depraved and dangerous behavior – as long as there’s ‘consent.'”