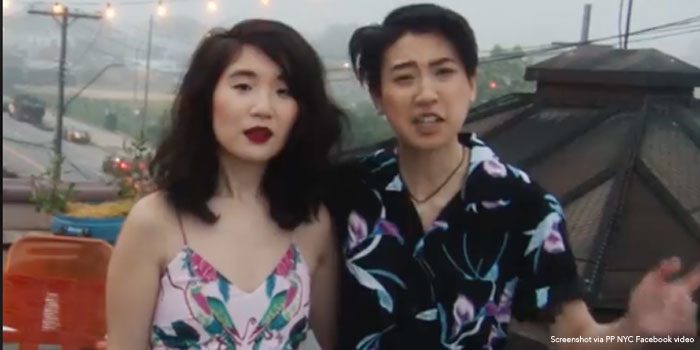 UPDATE 7/25: According to a report from The Federalist, Planned Parenthood of New York City has removed this ad from its YouTube account: “Planned Parenthood removed the 45-second ad from YouTube sometime Friday night, but you can still find it via other accounts.”

It’s no secret that Planned Parenthood’s business is abortion. What’s shocking is the lengths they will go to with the hopes of increasing their business and committing more abortions. The latest example is from Planned Parenthood of New York City, which just initiated a “Freedom to F*ck” fundraising campaign with explicit language, encouraging New Yorkers to have lots of sex, with lots of people — and urging them to come to Planned Parenthood to make sure they’re having “safe” sex, too.

“Planned Parenthood of New York City had to be brave and make fearless decisions to overcome their daunting challenges. So our first goal was getting them to embrace that. Which they certainly did,” Gerard Caputo, chief compliance officer of BBH NY CCO, the ad company responsible for the campaign, said. “We wanted to be celebratory in the face of massive opposition rather than plead their case in a typical PSA campaign that’s easy to ignore. ‘Freedom to F*ck’ is meant to speak to a younger generation more empowered than ever and hopefully willing to help. It all starts with the courage to do something different and we believe we have already succeeded.”

In addition to encouraging New Yorkers to patronize Planned Parenthood, the campaign seeks donations, over legitimate fears that the abortion organization will soon be losing tens of millions of dollars in taxpayer funding, claiming that this funding is necessary to provide health care services to women. This is an oft-repeated lie; Planned Parenthood is not a health care provider, and its business and priority is abortion:

Still, the claim of “providing healthcare” continues to be spread, using fear as a tool to help the abortion chain grow even larger and keep its grip on the half a billion dollars of taxpayer money they currently enjoy.

For this supposed “sex education,” Planned Parenthood receives taxpayer funding — all while teaching children to engage in things like BDSM, to try drinking urine, and try playing with feces. Counselors encouraged children to view pornography, visit sex shops — which is against the law for minor children — and get whips, blindfolds, and ties for experimentation. Teenagers were told that sex play resulting in bruises, burns, and welts is normal,  and that it can be fun to try things like whipping, choking, and even asphyxiation. Even one counselor admitted some of it was “extreme,” but recommended it nevertheless. And the book “50 Shades of Grey” was a common source of reference for the counselors:

… [I]f you’re gagged or something, and you can’t say that word, you need to be able to let him know. Patients sometimes come in with rope burns or… markings on their breasts, from, like, clamps.

This kind of sex ed is not limited to Planned Parenthood’s facilities; it’s even infiltrating our schools.

Why is this concerning? Because, dangerous sex advice aside, the end goal of all of this is for people (even children) to have more sex — and ultimately, this leads to more abortions (and more STDs). Live Action’s Aiding Abusers campaign has exposed the fact that Planned Parenthood does nothing to really protect minors — not even from abusers:

What’s worse is that Planned Parenthood feels it necessary to push for this in New York City, of all places, where already, 1 in 3 babies are aborted, and 78% of those abortions are on black and Hispanic babies. In fact, in New York City, more black babies are aborted than are born. According to the CDC, there are more abortions committed in New York City alone than in any other reporting state (California does not report the number of abortions committed there, or it would almost certainly come in first). It’s no wonder that New York City is considered to be the unofficial abortion capital of the world. On top of this, the city already has a terrifyingly high STD rate.

But despite all of this awful information, for Planned Parenthood, it’s full speed ahead on promoting promiscuity, and let’s be honest: it’s because promiscuity is good business for the abortion corporation. Planned Parenthood may defend the campaign, saying they want people to have “safe sex,” but condoms and birth control fail, and people who get STDs and seek abortion often are already using some form of protection.