Fifth graders in Washington state are being subjected to Planned Parenthood-taught classes, and one parent is leading the charge to fight back against this infiltration. Erin Graham, the parent of a fifth grader, discovered the abortion corporation’s connection in March when a letter came home with her son, informing parents that students in the fifth grade would be participating in a human growth and development unit. Included in the letter was a comment that Washington state requires students be taught about HIV prevention. 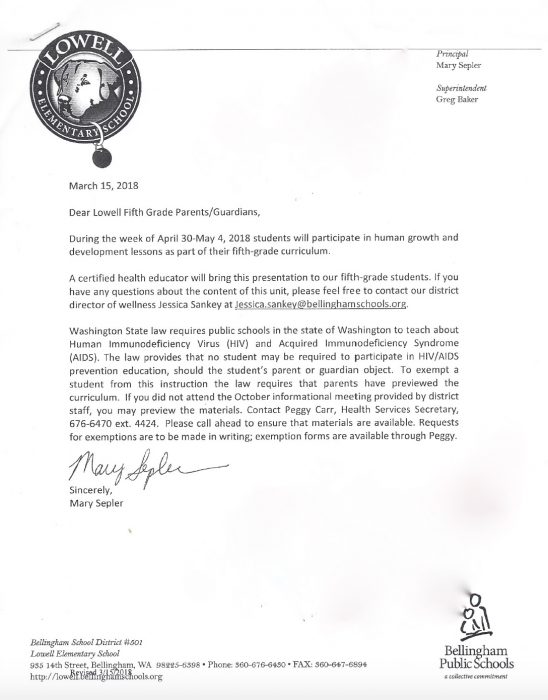 But Graham discovered there was much more to the lessons than disease prevention. She explained in an interview with Live Action News:

The state places an undue burden on families who wish to opt out of sex ed. If you want to opt out, you must either attend the once a year parents meeting, or go to school district office in order to review their HIV curriculum. Then you may receive an opt-out form… Imagine the outcry if parents had to either attend a meeting that’s held once a year or take time off work/out of their day to be lectured about HIV opt-in to sex ed classes, or if their kids are requesting condoms….

Indeed, the Washington State Office of Superintendent of Public Instruction (OSPI) notes: “[a] student may be removed from HIV/AIDS prevention education if the student’s parent or guardian, having attended one of the district presentations, objects in writing to such participation.”

As a concerned parent, Graham wanted to discover what her fifth grader would be learning if she allowed him to take the class. “The curriculum isn’t great as written,” she said, “but the room for interpretation is vast and when you throw in an instructor from Planned Parenthood, it becomes downright dangerous.”

Now that you are aware of the background of the consultant Lowell is bringing in, I suggest sending out an email notifying parents immediately. It may be a minority of people who find giving a platform in our elementary schools to an organization that terminates 300,000 babies a year offensive. Still, it’s a sizable minority, and their beliefs should be respected.

It’s clear that Planned Parenthood supports events such as this to create a relationship between themselves and the children of our community at an early and impressionable age. As an invited guest at your school, you are conferring upon the organization credibility and authority in the minds of students that Planned Parenthood otherwise wouldn’t have. However no school system should be taking political sides on this deeply controversial issue by inviting and encouraging this type of relationship. This is as disrespectful as inviting the KKK to host a debate about free speech or inviting the NRA to teach the unit on the Second Amendment. My guess is if any representative of those organizations was invited to speak at Lowell Elementary, the staff would feel it is their duty to notify parents.

However, there was nothing to reveal to the district; it had entered into the arrangement with full knowledge of the connection to Planned Parenthood from their representative, Christine Hagstrom, which was outlined in an advisory committee meeting over a year before:

I thought it only fair to notify you that I still plan on informing families myself, either directly or through press releases issued to the appropriate news outlets, that you are bringing in a Planned Parenthood representative to teach human development to your 5th grade students. I am not sure how else I could confirm that the appropriate information gets to the concerned families in time for them to give informed consent. Of course, if you have an additional plan as to how you are going to communicate this invitation to Lowell families, or any other ideas, I would love to read your proposal.

The principal said she had intended to send the information in her weekly newsletter, with varying parts explained over time, since the lessons were a ways off at the time of their dialogue. On March 29, Principal Sepler wrote a newsletter post to parents, which explained the unit and provided links to the lessons. 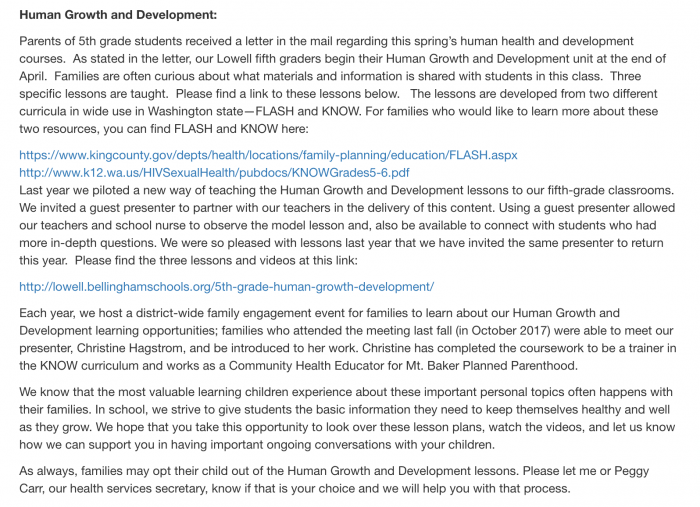 But Graham says that newsletter is not enough. Parents have to choose to receive the newsletter, so not all parents would even get it. Further, she told Live Action News the newsletters are usually not about such topics, and, thus, parents might not even be inclined to consider it important reading, even if they have opted in:

[I]t’s usually lighter, i.e. “This is what Mrs. So and so’s 3rd grade class is up to,” “Look at our school garden,” etc. It’s not meant to be official school communication. Who knows how many spam boxes it goes into or who many people actually read it in a timely manner?

She pointed this out in her response to the principal:

As you well know, parents have to opt in to receive this newsletter. For many, it goes in their spam boxes. Still more will never actually read it even if they do receive it. I would urge you to consider what you think proper notification may be if a controversial speaker were teaching critical material to your 5th grade child or grandchild.

Graham had also questioned the need to have a Planned Parenthood educator teach the unit, asking why the school had not chosen to reach out to a medical professional, who is more qualified to teach human growth and development material, or even to a pregnancy resource center, where trained health educators were also available. She concluded her note: “There are so many more reliable, less controversial and more respectful sources of human health and reproduction information out there. ” But she seemed to hit dead ends because Bellingham, apparently, wasn’t looking for other resources.

Beginning with the first lesson and the puberty video the principal told Graham and parents who received the newsletter fifth graders would be watching, there are many things that would potentially bother parents. While the video simply explains development, it has young children, likely 5th or 6th graders themselves, asking questions such as the following, posed by young boy: “I can’t believe I’m asking this, but sometimes my penis gets hard. What’s that all about?”

There are also discussions of “wet dreams.” And the video goes on to say that children don’t have to talk to their parents about these things if they are not comfortable (not many 10 year olds would likely feel comfortable discussing erections and wet dreams with mom), but they can talk to anyone they want. While parents have access to this video if they opt in to the newsletter, it’s 26 minutes long, and many may not take time to watch the entire video, trusting the school to take care of age-appropriate curriculum. But the program, called KNOW, is not what many parents would consider appropriate.

As the advisory group minutes from over a year ago noted, the middle school uses the KNOW curriculum for sex education, which Hagstrom also teaches, and lessons can be open to curricular interpretation.

From KNOW Curriculum, as posted on the Washington state schools’ site: http://www.k12.wa.us/HIVSexualHealth/pubdocs/KNOWGrades5-6.pdf

The HIV lesson sample the principal sent is a condensed version of the same lesson contained in the KNOW Curriculum. 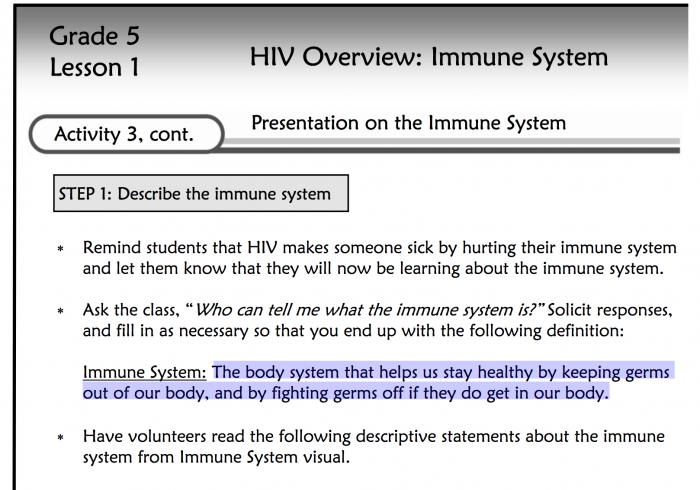 The KNOW Curriculum is fairly tame in the fifth grade, but it’s designed to be built upon, so even at age 10, it plants those seeds in children. In fifth grade, the lessons emphasizes that “Kids their age almost never get HIV, because having sex and sharing needles are not things that kids do,” but by seventh grade, Washington state’s KNOW Curriculum manual notes guidelines for teachers to:

Show and handle contraceptives no sooner than 7th grade and no later than 8th grade and continue lessons throughout high school. This includes condom demonstration on correct condom use.

Grandview Middle School does indeed use and promote the FLASH and KNOW curriculum, but what it doesn’t reveal is that the curriculum comes from ETR, and ETR is the same publisher that produces the tabled “Get Real!” curriculum. This shouldn’t be a surprise, since ETR Associates actually began as the educational arm of Planned Parenthood in Santa Cruz, according to American Life League. Today ETR is the clearinghouse for masses of health curriculum, including virtually all the controversial sex education curriculum that is connected to Planned Parenthood and slowly creeping into school districts across the nation unawares—at least until parents find out.

Indeed, the Bellingham Schools advisory group was told that Hagstrom was the current coordinator for Whatcom Teen Council, explaining that the “Teen Council presents about abstinence in middle schools and lessons are usually 55 minutes.” That line alone shows the misleading nature of Planned Parenthood’s involvement in Belligham’s schools, because abstinence is not remotely its focus. In fact, abstinence cannot be the focus, because the state of Washington’s policy for teaching “Comprehensive Sexual Health Education” requires more than abstinence be taught:

Abstinence may not be taught to the exclusion of instruction and materials on FDA approved contraceptives and other disease prevention methods.

But Whatcom Teen Council doesn’t need a state policy to be sure to avoid promoting abstinence. The group is Planned Parenthood-connected, and, consequently, promotes abortion, birth control, and other sexual related activity not related to abstinence. Live Action News reported on the abortion corporation’s teen affiliate group recently. The previous sponsor took his students to Washington, D.C., to lobby for reproductive rights, among other things. Bellingham Schools completely misled parents with its comment that the Teen Council simply comes into schools to teach abstinence. In fact, as Live Action News noted then:

The manual for those starting a Teen Council includes a sample lesson plan on sexually transmitted diseases. That lesson includes a game of figuring out which behaviors carry a high risk of contracting an STD.

And the KNOW Curriculum that Hagstrom is trained to teach in Bellingham’s middle school program is no less toxic, despite how it innocent it may seem in lower grades.

By the time they are high school students, even the ones not applying to be abortion evangelists by joining the Whatcom Teen Council likely will have it indoctrinated in them to be lifelong followers of Planned Parenthood.

And that’s just what Graham and many other concerned parents don’t believe should be taught in their children’s schools.