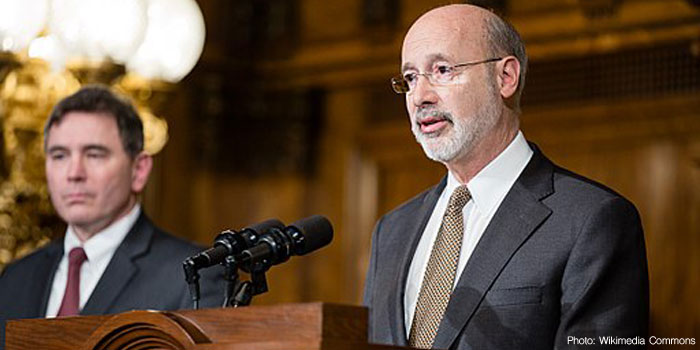 (LifeSiteNews) – Planned Parenthood has announced it intends to spend heavily to ensure that pro-abortion Democrat Tom Wolf remains the Governor of Pennsylvania.

“With nearly 75% of the Pennsylvania legislature opposed to safe and legal abortion, Governor Tom Wolf is critical to Planned Parenthood’s survival,” Planned Parenthood Pennsylvania Advocates & PAC declares in its solicitation for online donations. The group plans to spend $1.5 million toward his reelection this fall, the Tribune-Review reports.

Wolf “is a brick wall against efforts to roll back health care access and rights of Pennsylvanians,” Sari Stevens, the PAC’s executive director, said. Republicans control both chambers of the Pennsylvania legislature, meaning the fate of pro-life legislation currently rests entirely with the governor.

Wolf and his wife Frances are both former Planned Parenthood volunteers, and the governor has dutifully continued to serve the abortion giant in office.

He has used his veto pen to block legislation that would have banned late-term and dismemberment abortions, and has promised to veto legislation banning abortions that target Down syndrome children and abortions on babies with detectable heartbeats.

Pro-lifers have also hit Wolf for refusing to hold the abortion industry accountable for its treatment of women, noting that he praised a Planned Parenthood facility which has repeatedly failed state health inspections, and nominated for Virginia Secretary of State Pedro Cortes, a man who failed to take action against notorious Philadelphia abortionist and convicted murderer Kermit Gosnell while holding the same office in a previous administration.

In 2015, the government data analysis site InsideGov named Wolf the most liberal governor in America, as well.

“It’s no surprise that Tom Wolf is setting records for donations taken from special interests. He is bought and paid for by those filling up his campaign coffers,” Andrew Romeo, a spokesman for Wolf’s Republican challenger Scott Wagner, responded.

The Pennsylvania Pro-Life Federation says Wagner, currently a state senator, holds a 100% pro-life voting record. Wagner sponsored the late-term abortion ban Wolf vetoed, as well as legislation to defund Planned Parenthood. As “governor he would continue to fight for the rights of the unborn, which would include supporting the heartbeat bill,” Romeo said last month.

Current pro-life laws in Pennsylvania include requiring parental consent for abortion, a 24-hour waiting period, informed consent requirements including fetal development and abortion risks and alternatives, and abortion facility standards and inspections enacted in the wake of the Gosnell scandal.

Editor’s Note: This article originally appeared at LifeSiteNews on June 21, 2018, and is reprinted here with permission.