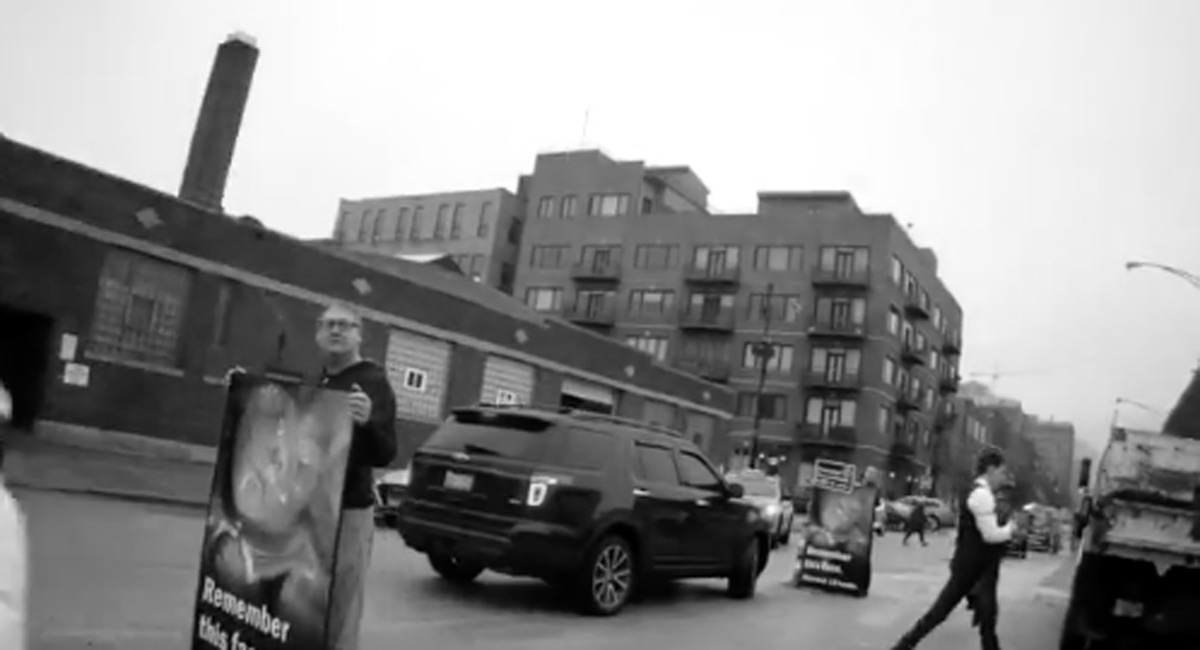 On Thursday, May 2nd, Planned Parenthood of Illinois held its annual Generations Celebration, and the Pro-Life Action League (PLAL) was ready for them. While participants wined and dined at the Revel Fulton Market in Chicago, PLAL, as well as pro-life groups Students for Life of America and Operation Save America/Operation Save Chicago, were standing by to educate about the real purpose of Planned Parenthood. “The official protest ends at 6:30, but we are going to be staying later,” says the cameraman at the beginning of a 13-minute long video of the protest posted to the group’s Facebook page. “We have some interesting, creative things to do.”

They stood outside the center with banners depicting unborn babies at various stages after an abortion. They had signs that read, “Planned Parenthood lies to you,” “Abortion is nothing to celebrate,” and “Abortion takes human life.” From early on in the video to the end, pro-lifers tirelessly proclaim the truth that Planned Parenthood takes over 300,000 human lives per year.

After the street protest, the group moved around to the side of the building where the Planned Parenthood event was being held. According to the caption in the video, black curtains had been put up “to hide the truth from donors.” To get around this, however, the group played a series of clips, repeatedly, for an hour. Some of the clips featured Planned Parenthood’s own president, Leana Wen. “Can you stand by and watch generations of our unborn children suffer the consequences?” said one clip, in which she referenced the Zika epidemic. “Where children live does not determine if they live,” she can be heard saying in another.

In addition to these clips, PLAL played a radio spot about a woman who died during an abortion:

Twenty-four-year-old Tonya Reaves had an abortion: a D&E, dilation and evacuation procedure, at Planned Parenthood at Michigan Avenue at 11:00 am, according to documents. Then there was bleeding, and at 4:30, she was transferred to Northwestern where she underwent another D&E, basically another abortion. That was at 5:30. Then, pain and more tests, and one of those tests revealed a perforation, documents say. Then surgery at 12 minutes past 10pm. An uncontrollable bleed was found. Reeves did not regain consciousness and was pronounced dead at 11:20pm in the operating room. Steve Miller, News Radio 780 and 105.9 WBBM.

PLAL followed this by broadcasting the audio of multiple recorded 911 calls, most of which involved responses to an unlicensed (according to PLAL) Planned Parenthood abortion facility at 1200 North LaSalle Avenue, a location which is still active, and still averages at least one 911 call for a patient every 6.5 weeks, according to Operation Rescue.

Woman: Yes, hi, this Planned Parenthood at 1200 North LaSalle. We need an ambulance for a patient.
911 Operator: Okay, what’s going on, there?
Woman: The patient had a pregnancy termination and she is having some bleeding.

911 Operator: Fire department?
Woman: Hi, this is [redacted] from Planned Parenthood and we need ambulance at 1200 North LaSalle, please.
911 operator: And what’s going on over there?
Woman: Uh, possible epilepsy or seizure. We’re not quite sure what it is.
911 operator: Is she pregnant?
Woman: Well, she’s just had a — she’s status post-abortion.

The protest’s third phase involved moving the protest to the back of the building as the Planned Parenthood event participants were leaving. “

The abortion activists responded with obscene gestures, and sometimes arguments and shouts. “Don’t give me a middle finger!” said the pro-life cameraman.

“I’ll give you two!” shrieked the Planned Parenthood supporter.

As the event participants were filing out and into their valet-parked cars, pro-life protests repeated basic truths:

“Human life has value,” was the repeated theme.

Two interactions were especially noteworthy. One man seemed surprised at PLAL’s banners and statements. “Like there’s a fundraiser, right here, for… about killing babies?” he asked. “Planned Parenthood,” said PLAL. The man responded simply, “F— that.”

In another incident, a pro-abortion attendee, when challenged about the facts of abortion, accidentally referred to the preborn child as a “baby” three times, as if witnessing to the truth in spite of herself.

“Fine. But can we agree it’s a baby?” asked the pro-lifer.

“That’s, like, such an aside, because when you actually have to look at the facts and the actual, like, what other things are happening with that baby, with the parent, with the parents…” said the woman.

“So we agree it’s a baby?” asked the pro-life demonstrator again.

“I’m not agreeing,” she replied.

PLAL’s pro-life demonstration was relentless in witnessing to the truth about abortion. The group remained late into the evening challenging donors with the hard reality of Planned Parenthood’s atrocities, and reminding them where their money would go when supporting the abortion giant. They persisted in the face of ridicule, disdain, and hostility. As one pro-lifer declared, the attendees were “funding an organization that takes hundreds of thousands of human lives every year. Human life has value. You can can give me all the middle fingers you want, ladies, but human life has value. Abortion takes a human life. A middle finger does not know about science. Abortion takes a human life.”

Editor’s Note, 5/13/19: Added in information regarding Students for Life of America and Operation Save America.