Over 250 of pro-life activists gathered in Birmingham, Alabama, on Saturday to pray and peacefully protest the opening of a new Planned Parenthood location. The event, organized by CEC For Life, was advertised as a “city-wide prayer vigil” and along with prayer, there were talks by local pastors, as well as two state reps and representatives from the Life Legal Defense Foundation.

“Alabama is a pro-life state,” said Rep. Matt Fridy to CEC For Life. “We will continue working towards protection for every life at every stage, including the preborn.”

Currently, Alabama has three abortion clinics, including one Planned Parenthood located in downtown Birmingham. According to CEC For Life, the downtown Birmingham location is old, dirty, outdated, unable to attract a doctor and is struggling to stay open. The purpose of the new construction is to build a state-of-the-art facility where abortions can be committed. 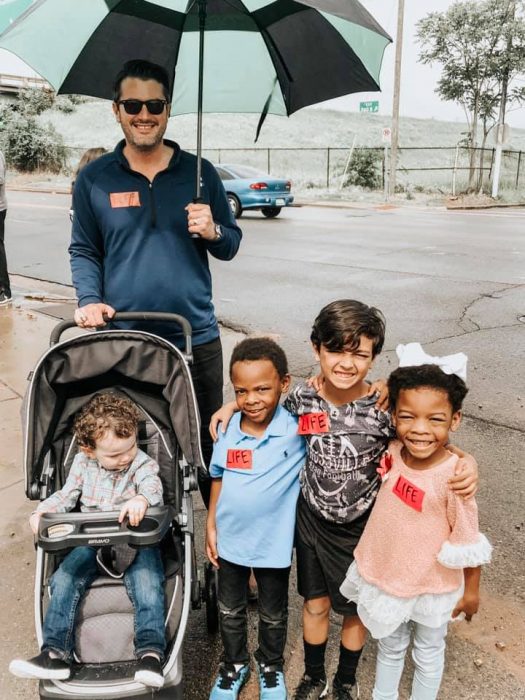 The Brumfield family stands for life in Birmingham, AL.

As proof of the power of protest and prayer, Fr. Terry Gensemer, Director of CEC for Life, held up a brick from the now-closed New Women All Women abortion clinic.“We believe God doesn’t want an abortion clinic here,” he told AL.com.

According to Sarah Howell, Executive Assistant at CEC For Life, one concrete company has already withdrawn from the job after learning it was an abortion facility being constructed.

“After McCord Concrete withdrew from the Planned Parenthood job yesterday, news has gotten around to other contractors who ALSO didn’t know they were building an abortion clinic,” said Howell in a Facebook post. “We received word that some of them are leaving the job site too!”

The downtown Birmingham Planned Parenthood has been beset with issues in the past, opening and closing multiple times. In 2014, the location closed for 10 months after employees were caught selling drugs in the parking lot. In 2012, a Live Action investigation uncovered the facility’s willingness to provide illegal abortions to minors, as well as to avoid reporting statutory rape; this resulted in the Department of Health placing the location on probation. Other health complaints include multiple botched abortions, failure of employees to wash hands, and failure to sterilize instruments. As of now, the location remains open but has not been committing surgical abortions since September 2017.

“A new building isn’t going to make Planned Parenthood suddenly grow a conscience and start following the rules,” said Mary Ann Vann, a Birmingham pro-life activist who runs 40 Days for Life there. “The body of work following this facility is atrocious, affirmed every day by fewer and fewer clients going through their doors.”

Matt Brumfield of Bound4Life leads worship at the pro-life protest of the new Planned Parenthood in Birmingham, AL. Photo courtesy of Natalie Brumfield

Howell highlighted these incidents and Planned Parenthood’s history of neglect to explain why Birmingham residents don’t want the abortion corporation in their city. “Despite how you feel about abortion, if you just look at the history, the body of work of this business, they have covered up statutory rape, sold abortion drugs illegally in the parking lot, they’ve had random closures that they didn’t tell the Department of Public Health about, which is against regulation,” she said. “They’re not the gold standard of healthcare, and we believe in Birmingham that we don’t need them.”

Several pro-life initiatives have come before the Alabama state legislature in the past year, most notably Amendment 2 — which stated that no provisions of the constitution provide a right to an abortion or require funding of abortions. It passed despite $1.4 million funneled by Planned Parenthood South East to stop the measure.