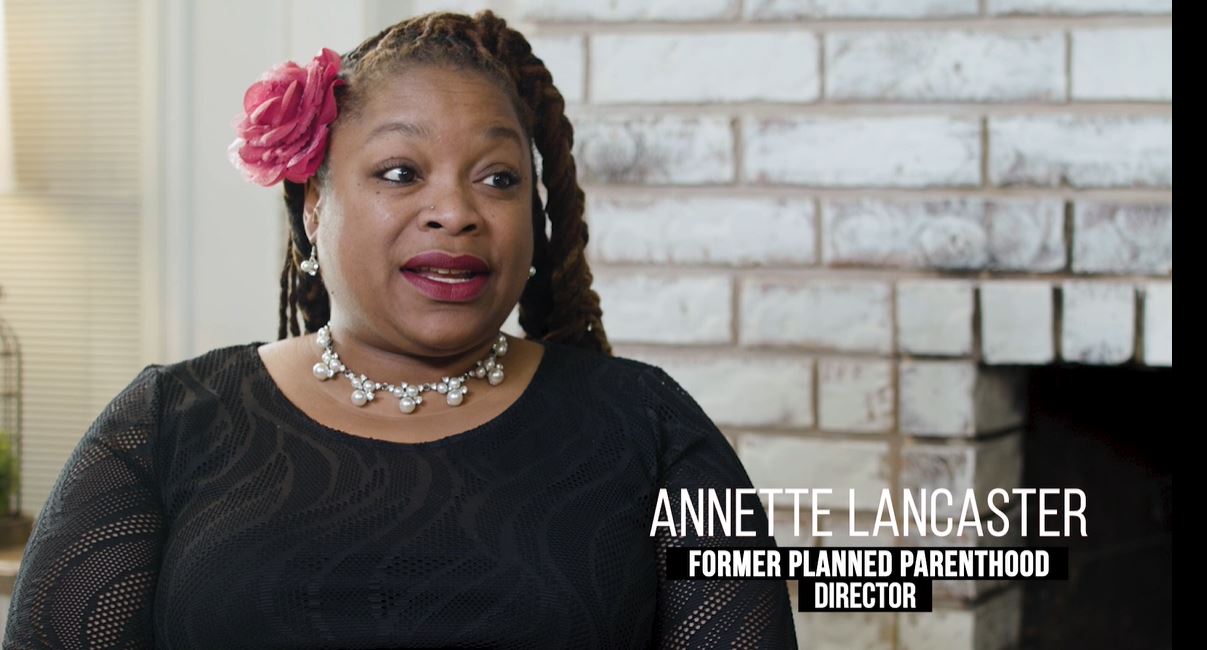 “Products of conception” is the abortion industry’s misleading term for preborn babies. In these rooms, abortion workers must examine the “tissue” from each abortion. Often, this means poring over arms, legs, torsos, and little crushed heads from abortions, like the first trimester surgical abortion described in the video below by former abortionist Dr. Anthony Levatino. They must piece the babies back together to make sure that no body parts are left behind in the woman’s uterus to cause a potentially life-threatening infection.

Lancaster revealed in the interview that she didn’t have strong beliefs about abortion when she was hired to work at Planned Parenthood. She hadn’t given the issue much thought and it had never touched her life. She was hired as a manager and thought she would only have administrative duties. She had no idea she’d be assisting in abortions and handling the bodies of aborted babies. She explained:

[B]eing hired as a manager, I came in under the assumption that I was just going to be in the office, just doing a lot of paperwork – administrative work. But within a few weeks I found myself not only in the procedure room, but as well in the back and what we called the POC room. The products of conception room. And that became very disturbing for me.

Lancaster was not new to the medical field. She’d seen and dealt with sick and injured people, and witnessed surgeries. But nothing prepared her for what she saw in the abortion facility, “I had worked in healthcare for a long time, so I’d seen a lot of things, a lot of other medical procedures and surgeries. But to actually see a baby, and to actually see women crying on the table, became very bothersome for me.”

She described the POC room:

Basically, when the child is aborted, it’s passed through a window into the POC room. And that is where the workers are piecing the baby back together in a petri dish or in a pan. Basically, to make sure that all of the body parts were removed from the mother’s uterus. In that room, I’ve seen many women break down and cry. Why do they continue to do it? Multiple reasons. Either they didn’t want to lose their job, they really wanted to be there because they needed the income – but no one really wanted to work in that room.

Here Johnson interjected, and said that abortion workers at her facility were admired if they could handle the POC room. She explained, “In my clinic, the POC room was – there was almost a sort of stature that went with working in that room…. You were somebody special if you got to work back in the POC room.”

It was similar in Lancaster’s clinic. “[I]t was almost like a Catch-22,” she said. “You were seen [as] highly esteemed if you could work back there, because then you were seen as hard-core. You know, you could do it. This person won’t have a breakdown when they go back there.”

Nevertheless, many of the abortion workers had a hard time dealing with the reality of aborted babies. Lancaster said, “But many of the women, even though they went back there and they did it, and they were held at this high esteem, they all still had breakdowns at one time or the other. Which showed me that they really did not want to be back there.”

Several years ago, Johnson posted on Facebook about the nightmares she and other former abortion workers have involving the POC room:

When I worked at Planned Parenthood, I was trained to be a POC technician. POC stands for ‘Products of Conception.’ Sometimes, if the staff were feeling funny, we would say that it stood for ‘Pieces of Children.’

Inside every abortion clinic across the country, someone is tasked to be the POC technician. Their job is to take everything suctioned out of the uterus during an abortion and reassemble the parts of the baby. We did this to ensure that the uterus was empty of all fetal parts. If something was left, it could create a potentially fatal infection for the woman….

You may say, ‘I bet they have nightmares’ Yes, ‘they’ do. Nightmares especially come after you leave the industry…. I humbly ask that you sincerely pray for those who have left the abortion industry. Our wounds are deep and many of our scars remain.

Abortion workers know perhaps better than anyone the terrible reality of abortion. Many of those who have left the abortion industry tell their stories in order to educate people about the violence and destruction that is abortion.