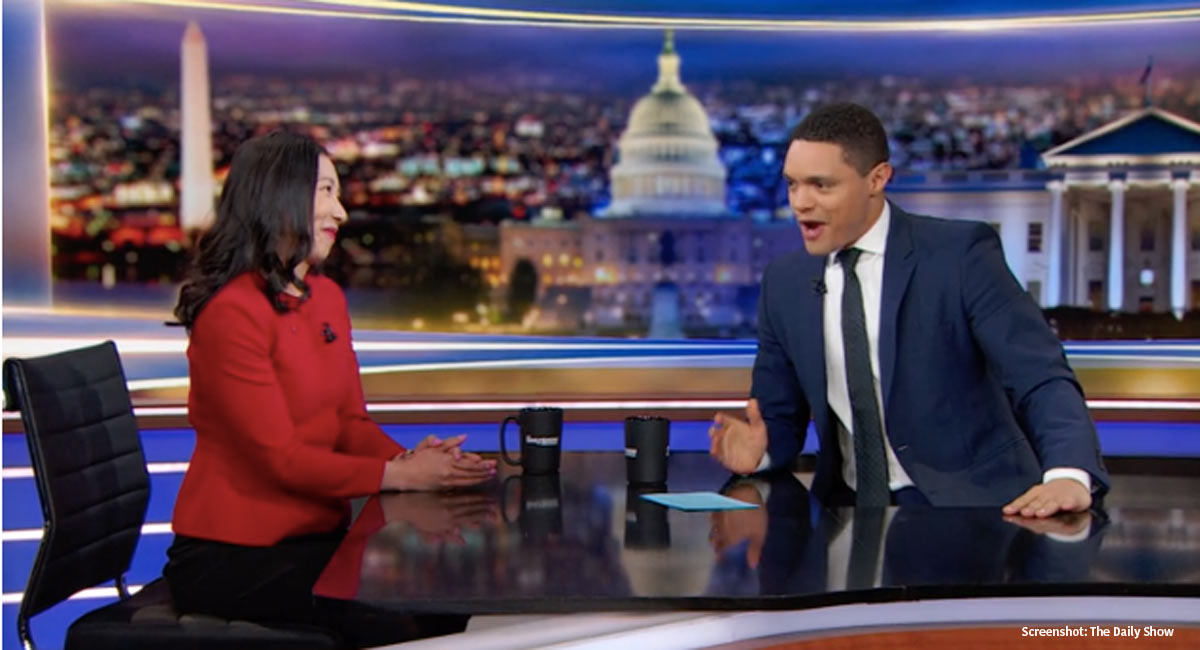 It’s clear that even though Planned Parenthood’s leadership has changed, everything is still the same. It’s still the same lies, the same propaganda, and the same focus on abortion above all else — and the same media outlets willing to carry water for the country’s biggest abortion corporation. The new president of Planned Parenthood, Leana Wen, has continued her publicity tour in an effort to repair the abortion corporation’s damaged reputation, this time appearing on the “Daily Show” to talk about the supposed “life-saving” work the of her organization. Unfortunately, the interview was filled with nothing more than the usual lies and falsehoods.

Wen sat down with Trevor Noah, a noted abortion supporter himself, to fight back against issues that have been a nightmare for the abortion industry, especially the notion of preborn babies surviving brutal late-term abortions. According to Wen, Planned Parenthood is a non-political health care provider that saves lives.

But as usual, her claims weren’t even remotely close to the truth.

Planned Parenthood is an abortion organization — not a “health care provider”

Wen claimed on The Daily Show: “I truly believe that health care is a human right that’s guaranteed to all, and not just a privilege available to some. Look, we’re not the ones that made health care political. I mean, getting medications for your children, getting breast and cervical cancer screenings, STI tests, these are not political issues. But when other people have made healthcare political, it’s our duty to fight back with everything we have because it’s about people’s lives.”

This is some interesting gaslighting. Why is Planned Parenthood’s current president claiming that others have made abortion political? It was Planned Parenthood’s former president Cecile Richards who claimed her goal was to make the abortion corporation “the largest kick-butt political organization.” She also said on another occasion, “We have the potential to swing the vote… and that’s a lot of power. The question is, what are we going to do with it? And the answer is, we’re going to use it. We’re going to marry our current reality as the largest reproductive healthcare provider in this country with our opportunity to be the largest kickass advocacy organization in the country….”

Health care services at Planned Parenthood have been decreasing year after year. What has been increasing, meanwhile, is abortion. When abortion is their business, it’s laughable to hear Wen tout Planned Parenthood’s “life-saving” work.

(In addition, it seems more than a little strange for the president of an abortion-focused organization to insinuate that they have a part in dispensing uncontroversial “medications for your children” — whatever that means.)

READ: So much for 3%: Planned Parenthood prez says abortion ‘our core mission’

Late-term abortions aren’t as rare as you think, and babies do survive them

Wen also pushed the idea that late-term abortions are rare, and that babies don’t survive them. She said: “When you look at arguments Republicans pose from the other side, they say, ‘We’re here to protect the unborn child.’ President Trump has been seen on the campaign trail saying this is about late-term abortions. You know, you hear the stories now where, I mean, President Trump actually said it’s gotten to the point where a baby can be aborted after it is born….”

At this, the audience laughed. She continued: “We have to call out President Trump for what he is doing, which is lying. What he is saying has no basis in medicine or reality. And here are the facts: about 99% of abortions occur before 21 weeks; those that occur later in pregnancy are because something in the pregnancy has gone very wrong … these are extremely difficult, hugely personal and challenging circumstances that women and families find themselves in and they deserve our compassion, and President Trump is exploiting their pain for political gain and I say to him, ‘Shame on you, President Trump.’”

Arguing that late-term abortion only happens when the pregnancy has “gone wrong” is a common tactic used by abortion supporters. It’s also blatantly false.

Doe v. Bolton — Roe v. Wade’s companion decision — ensured that abortion would be available to women at any time, for any reason, thanks to its vague definition of “health.” The ruling states, “… We agree with the District Court, 319 F. Supp., at 1058, that the medical judgment may be exercised in the light of all factors – physical, emotional, psychological, familial, and the woman’s age – relevant to the wellbeing of the patient. All these factors may relate to health….”

And even pro-abortion sources disprove Wen’s argument, such as a 1988 Guttmacher study, which found that only 2% of women sought late-term abortions because of a health problem with the baby. A 2013 study published by the Guttmacher Institute also said, “data suggest that most women seeking later terminations are not doing so for reasons of fetal anomaly or life endangerment.” Pro-abortion researcher Diana Greene Foster likewise stated, according to a report from the Congressional Research Service, that abortions for fetal abnormalities “make up a small minority of later abortion.” And a 2010 paper from Julia Steinberg, of the pro-abortion Bixby Center for Global Health, said, “Research suggests that the overwhelming majority of women having later abortions do so for reasons other than fetal anomaly (Drey et al., 2006; Finer et al., 2005, 2006; Foster et al., 2008).”

It is true that most abortions are committed earlier in the pregnancy. But the CDC’s Abortion Surveillance report has found that late-term abortion isn’t so insignificant or rare. As Live Action News previously noted:

According to the latest data, there are about 1,671 abortion providers in the United States. Of those, 20 percent commit abortions after 20 weeks. That equates to more than 330 abortion providers nationwide who are willing to kill viable preborn children. According to the Centers for Disease Control, in 2015, approximately 8,296 abortions were performed at and after 21 weeks gestation. That’s about 25 preborn babies, 21 weeks and older, killed per late-term abortionist. Late-term abortion is definitely not rare.

Meanwhile, it is a known fact that babies do survive abortion — and when they do, abortionists can’t be relied upon to save them.

Noah’s segment with Wen was a laughable excuse for an interview; not once did he challenge or question her, or push back on the lies she continues to spread. But when it comes to mainstream, abortion-friendly media, this is par for the course.