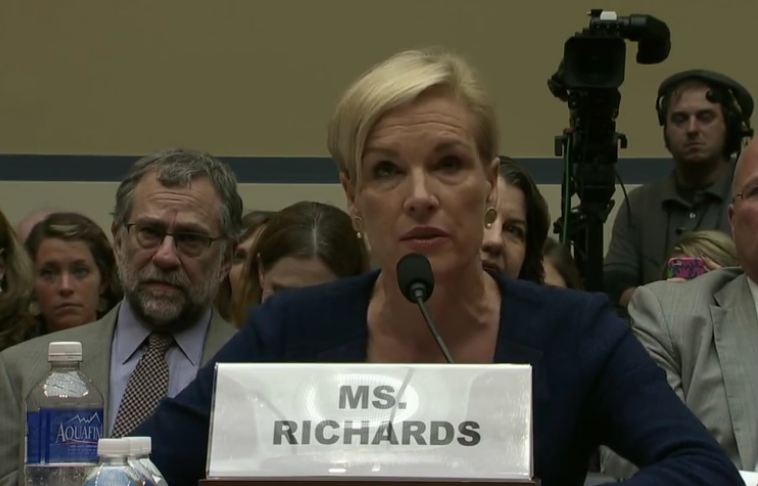 Richards also had quite the incredulous claim when asked about babies born alive after abortions.

Rep. Ron DeSantis (R-FL) went right into that issue with his five minutes allotted, and Richards seemed to be caught off guard.

DeSantis: Ms. Richards, if a child survives an abortion attempt, should it be given nourishment and medical care?

Richards: I’ve never heard of such a circumstance happening. I…

Richards testified under oath, so one would hope her claim was true. It’s hard to believe though, especially considering insight from Abby Johnson, a former Planned Parenthood director, who has talked about Planned Parenthood performing post-viability abortions.

Planned Parenthood has been critical about a “fixed viability” so it’s worth questioning when the abortion giant considers a baby viable, if not according to the medical standard.

What happens when a baby survives an abortion? Live Action’s undercover cameras reveal what late-term abortionists would do with a baby struggling for life. Watch their shocking admissions from our “Inhuman” investigation.

Richards’ response showed there’s a lot she doesn’t know about her own organization and its history. And this was a rampant theme throughout the hearing. Gianna Jessen and Melissa Ohden are two such abortion survivors, though, and they just testified a few weeks earlier before Congress at a separate hearing on Planned Parenthood. Jessen has the paperwork to prove she survived an attempted abortion at a Planned Parenthood clinic.

Planned Parenthood abortionists have also discussed aborting babies through partial-birth abortion, in which they even admit the baby is alive. Dr. Savita Ginde, Vice President and Medical Director of Planned Parenthood of the Rocky Mountains, admitted that up to 10% of babies in the second trimester are born “intact” at a Denver Planned Parenthood without the abortion having been performed, leading to significant questions of born-alive infants.

Most simply and importantly though, is that Richards failed to answer a very basic question.

Rep. DeSantis clearly took issue with her shocking answer, and made it simpler for Richards by asking, “But you would say that there would be medical care, would be in order at that point? Forget Planned Parenthood – just generally?”

And yet Richards still did not answer immediately with a full answer, though it did eventually come:

Well I’d say, again I want to be responsible for Planned Parenthood, and what we do there. Certainly, in the situation, which again, has never occurred at Planned Parenthood that I know of, a baby born, that um, baby should, as the mother should, get appropriate medical care from the physician, and would.

There you go. Cecile Richards finally admitted that she believes a child born alive from an abortion should receive medical care. She even acknowledged it as a baby. (Would she have admitted that the baby boy discussed in this tape, whose face was allegedly sliced open and whose brain was harvested after he survived an abortion at the San Jose Planned Parenthood clinic, was a baby?)

Don’t get too excited.

Despite Richards’ eventual admission, her nervous tone and trailing off raises questions about the sincerity of her response. Moreover, the continual actions of her own organization raise additional red flags.

Just this month, the House of Representatives passed a bill containing criminal liabilities for harvesting the parts of babies born alive from abortions. And Planned Parenthood opposed it.

In March 2013, Alisa LaPolt Snow, a lobbyist for Planned Parenthood, testified before the Florida legislature that the organization believes giving life-saving treatment to a born-alive infant is a “decision … left up to the woman, her family, and the physician.” This is a point she stuck to time and time again.

Subsequent statements from Planned Parenthood and from Cecile Richards herself don’t provide taxpayers with much comfort. Richards’ ignorance of abortion survivors – likely willful – is astounding.