And what does Planned Parenthood do with born-alive infants now?

[This measure] provides that infant born alive during or immediately after attempted abortion is entitled to same rights, powers, & privileges as any other child born alive in course of natural birth; requires health care practitioners to preserve life & health of such infant born alive, if possible; provides for transport & admittance of infant to hospital; provides certain services for infant; requires health care practitioner or employees who have knowledge of any violations with respect to infants born alive after attempted abortion to report those violations to DOH; provides penalty; provides for construction; revises reporting requirements.

Christian News reported on a subcommittee hearing earlier this month on the bill. During the debate, several Florida representatives were shocked that anyone could oppose a bill that so clearly provides life-saving care for a struggling newborn. They emphasized that, despite how a baby enters this world, every baby should be fought for and given appropriate medical care once he or she is born. 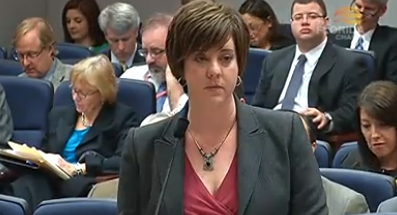 True to form, Planned Parenthood showed up to the committee hearing to register its opposition for the bill. At the conclusion of Planned Parenthood’s spokeswoman’s remarks (you can watch them below), one pro-choice representative seemed floored:

I…I…I…boy, I’ve been pro-choice my whole life, and I can’t think of a more sensible bill in this regard.

Others chimed in with near disbelief, horrified that Planned Parenthood would speak out against a law that would force their abortionists to take basic actions to save the life of a living, born child:

It makes me sick to my stomach. … Who we are and what we do with our children is so absolutely fundamental to what we are as a community and as a state and as a civilization.  And if we can’t take a stand and protect the most vulnerable, God forbid who we are and where we’re headed.

Another representative asserted that the talking points of those who support abortion “have nothing to do with this bill.”

In the event that a human being is born, and in need of medical care, what do we do? And it seems like a no-brainer, but apparently it isn’t because that very hand that has reached into the womb is now seeking to reach outside the womb and accusing us of wanting to reach in. What a convoluted argument this [Planned Parenthood’s] is.

Indeed. Planned Parenthood and abortion supporters want every possible right to reach into women’s wombs and suck or tear their babies out. And now, in Florida, their opposition to this bill leaves them in the position of fighting to “reach outside the womb” and do whatever they want with the children who survive. The Florida legislature may not want to discuss what happens when a born-alive infant is not resuscitated and saved, but the evidence is clear: these babies are often left to die, thrown in the trash, or drowned, or they have their spinal cords snipped.

During the hearing, Emily Young, a medical student at Nova Southeastern University (who claimed she will be a family doctor in June), spoke in opposition to the bill just before Planned Parenthood. She urged legislators to vote “no”:

… because it interferes with my ability as a doctor to provide a safe and legal medical procedure for my patients.  [The bill] tries to indicate and dictate the practice of medicine for women and their doctors. But it’s just not that simple. We don’t know a woman’s specific situation. We’re not in her shoes, ever.

Young also asserted that any decision related to adoption, raising a child, or to “end a pregnancy” must be the woman’s:

A woman, not politicians, should make an informed decision when it comes to her own pregnancy without feeling shamed or judged. … [R]espect a woman’s ability to make these personal decisions with her family, her faith, and the counsel of her doctor without political interference.

Perhaps Young admitted more than she meant to. How safe can parents feel when “family doctors” have these kind of views? Apparently, a newborn infant – at least in some circumstances – is not a patient. Since when does abortion extend to killing an infant outside the womb who survives? How is that part of “a safe and legal medical procedure”? What does one person’s “specific situation” have to do with the needs of a dying, struggling person right in front of a “family doctor”? And since when does “pregnancy” extend after birth and “personal decisions” include a mother choosing to have her born, living child killed?

During questioning, Planned Parenthood’s representative was unable to adequately explain the abortion giant’s opposition to the Infant Born Alive Act. She repeated some of the claims that Emily Young made, and – perhaps most shocking of all – was unable to give an answer on what Planned Parenthood’s abortionists currently do when a baby is born alive. Hmmm…I wonder why that information isn’t exactly forthcoming.

You can hear the entire hearing for yourself here. (Planned Parenthood’s comments start right around 37:00.)