As of today, it appears that the Republican-led United States Senate may have the votes needed to confirm President Trump’s nominee, Judge Brett Kavanaugh, as the next Supreme Court justice. Democrats and their allies are naturally very unhappy at the prospect of a justice with potentially pro-life convictions.

Planned Parenthood, the nation’s largest and most profitable abortion provider, is such a staunch ally of the Democratic Party that in recent years, its former president even spoke at the Democratic National Convention. It gives thousands upon thousands of dollars to the campaign coffers of abortion-favoring Democratic Party candidates and incumbents. And therefore, Planned Parenthood is disturbed at the idea of a potentially pro-life majority Supreme Court — so disturbed that it tweeted out what appeared to be some sort of strange threat on October 4, 2018: 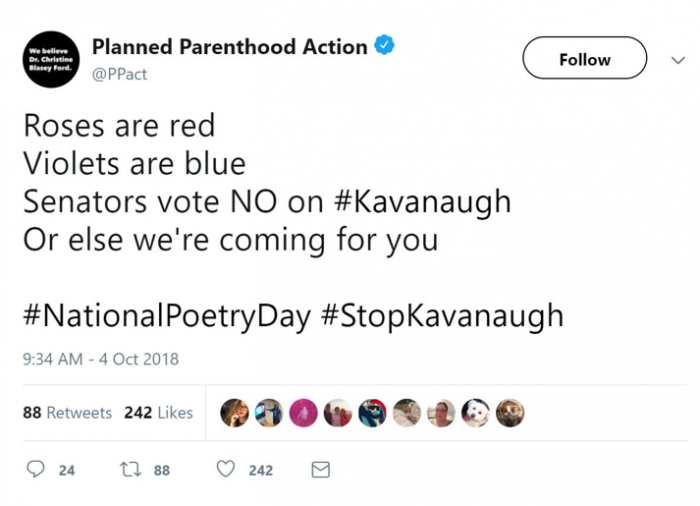 Phrases like “or else” and “we’re coming for you” certainly seem like threats of retaliation — most likely political. And political retaliation is Planned Parenthood’s favorite thing.

The organization, after all, spends about $20 million (at least) each election cycle in an attempt to remove pro-lifers — usually Republicans — from office. This election season is no different. In fact, Planned Parenthood has pledged to join other progressive groups, as Live Action News’ Carole Novielli reported, “to invest an ‘unprecedented’ $30 million to influence who is elected to key state and federal offices in the 2018 midterm elections.” But, as Novielli points out, “these millions are not really as unprecedented as Planned Parenthood wants the public to believe, as it has poured an extremely large amount of money into elections over the years to elect pro-abortion Democrats, some with less than successful results.”

Planned Parenthood is, of course, supported with $500 million in taxpayer funding every year. In addition, it has many donors — people like billionaire George Soros, who is also busy pouring money ($246 million) into a whole host of pro-abortion protest groups opposing Judge Kavanaugh’s confirmation, including Planned Parenthood. According to Carole Novielli, the abortion corporation “has received $21.2 million from Soros since 2000.”

The organization’s new president, Leana Wen, has attempted to claim that “healthcare” (read: abortion) shouldn’t be political. But abortion isn’t healthcare. It’s killing. And given how very politically involved Planned Parenthood has chosen to become — now even making veiled threats to senators of a political party over a Supreme Court nominee because of fears over a potential end to Roe v. Wade — it’s clear that the nation’s #1 abortion corporation is saying one thing and doing another.