While Schenectady, NY, where Planned Parenthood has already landed in a mud pile of controversy, is across the state from Niagara Falls, the two school systems seem to have much in common. In addition to implementing sex education curriculum with ties to Planned Parenthood, both districts have superintendents who have led the charge to bring these curricula to minors, often without their parents having a full understanding of what they are learning. Live Action News reported on the Schenectady sex education situation just weeks ago, and now Niagara Falls has followed suit by adopting a controversial curriculum, which, ironically, doesn’t even serve the purpose the superintendent says he is aiming to serve: reducing teen pregnancy.

Many parents would take issue with the Be Proud! Be Responsible! curriculum if they knew its content. The curriculum is published by ETR Associates, an “offspring” of Planned Parenthood, as the American Life League has revealed. On the surface, it appears to be a practical tool for schools, helping young people be responsible about avoiding the HIV virus, as its webpage promotes:

Be Proud! Be Responsible! An Evidence-Based Intervention to Empower Youth to Reduce Their risk of HIV is a multi-media, 6-module curriculum that provides adolescents with the knowledge, motivation and skills to change their behaviors in ways that will reduce their risk of contracting HIV.

The superintendent of the Niagara Falls City School District wants to update the district’s health and sex education programs. Thursday, the public weighed-in on his proposal.

“I think we’re meeting kids in the situation where it’s at. So, I don’t think that it’s a revolutionary idea. I think it’s an idea that’s time has come,” said superintendent Mark Laurrie.

Laurrie says the abstinence-only sex education approach is not working. He points to stats from the New York State Department of Health which show teen pregnancy rates in some parts of Niagara Falls are double the state average.

And that’s how the Be Proud! Be Responsible! came to Niagara Falls. According to the information disseminated at the December 21 board meeting, just before the district’s holiday break: 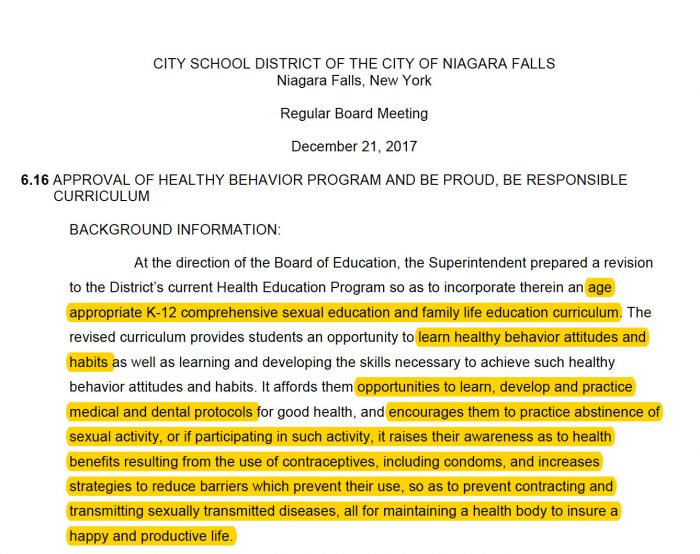 The revised Health Behavior Program will utilize the Be Proud, Be Responsible, 2010 Fifth Addition [sic] Curriculum, which has been demonstrated effective in instilling healthy behavior habits and in reducing risky sexual attitudes of males and females of all races. Implementation of the Program and the Curriculum and the instruction and services will be provided by appropriate school personnel and/or health services providers trained, and supervised as is required by applicable laws and/or regulations. 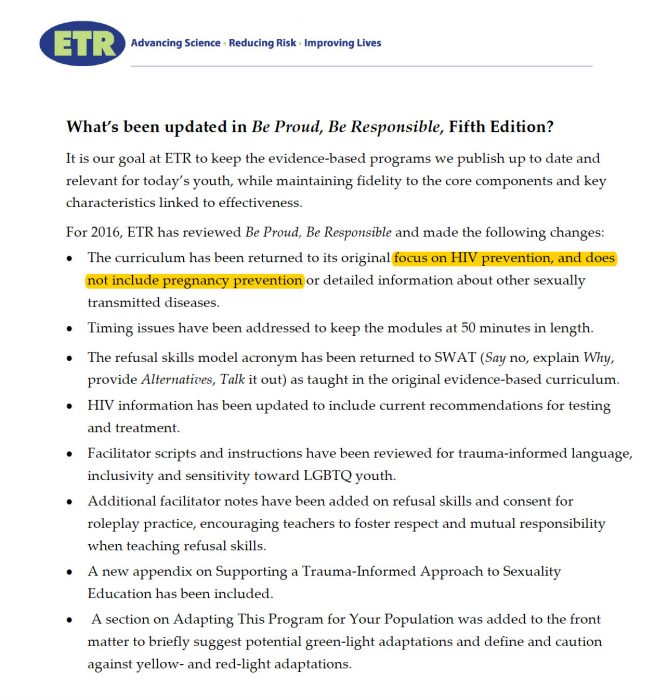 The question, then, is what is the actual goal of Laurrie and the Niagara Falls district in turning from abstinence-only sex education to letting Planned Parenthood have a place in its classrooms? Even though there’s not a focus on reducing teenage pregnancy in this curriculum, there’s certainly talk of sex. 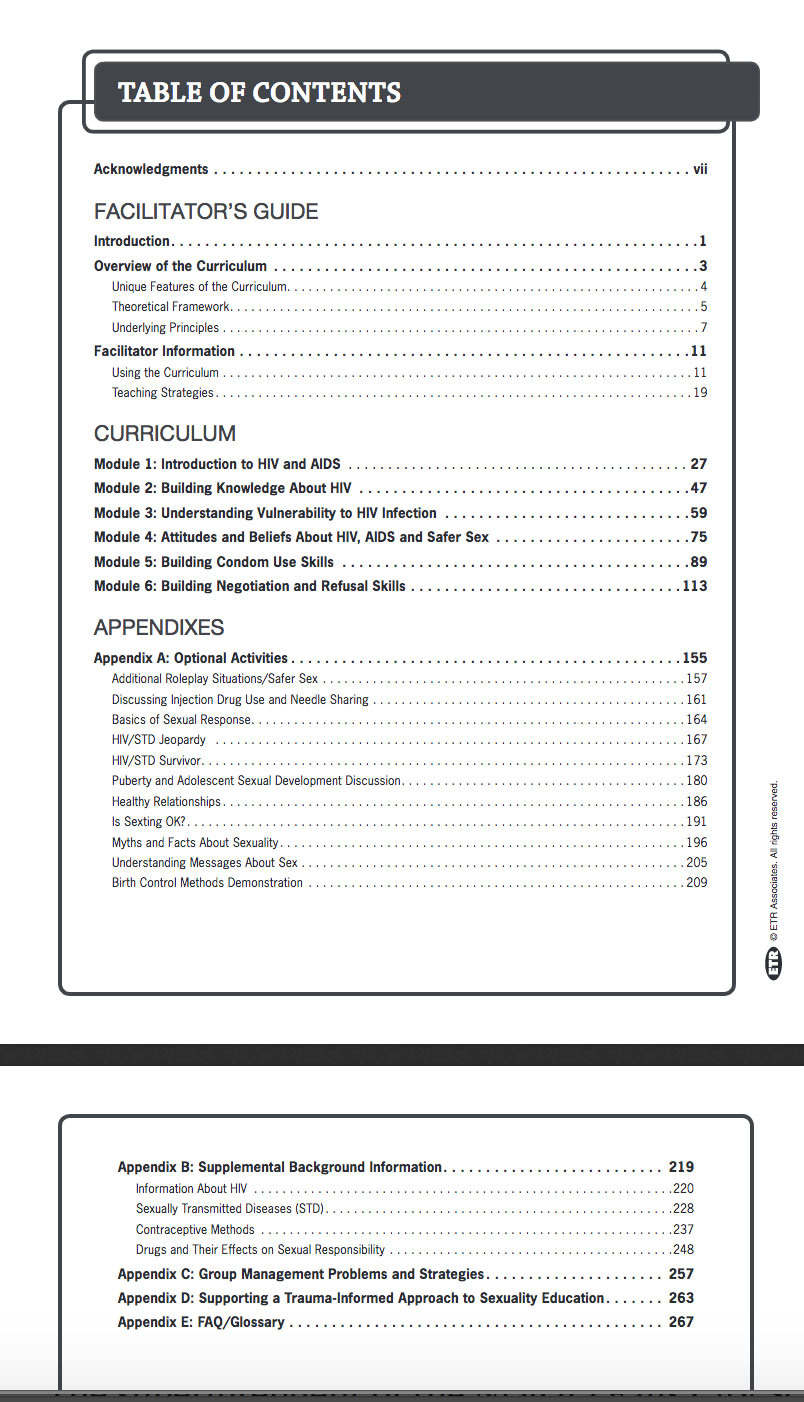 News organizations report there will be more than just the curriculum. WKBW reports:

Under the new program, students will learn about contraception and sexually transmitted diseases. The Community Health Center will also offer contraceptives and mental health services at Niagara Falls High School.

However, the Planned Parenthood-connected curriculum was the focus of the board vote. It seems the new curriculum began with some local teenagers. The Buffalo News reports on students who asked for a new sex education program. The paper reports:

The rates of teens getting pregnant or contracting sexually transmitted diseases are far higher in Niagara Falls than the state average.

And that has one group particularly worried: Niagara Falls teenagers.

They have identified a place where they can go to help curb those high rates – their classrooms. But they’re not satisfied with what they have been hearing there.

So the Niagara Falls Youth City Council, a 10-member group, addressed the Board of Education last week and asked for better sex education in the high school’s mandatory health courses.

“I’m a ninth grader, and all my friends are participating in sex, and they have no idea what they’re doing,” said Mia Maye, a freshman Youth City Council member. “They’re not being safe about it. They’re always scared there’s going to be a pregnancy scare or an STD. And they have no one to talk to about it.”

They found at least one sympathetic listener.

“For quite a long time, we haven’t paid enough attention to it,” Laurrie said. “I think their advocacy was right on, a topic that needed to be addressed.”

Laurrie said the high school’s current sex ed program “is based around abstinence, and abstinence only.”

The students question how effective the program is, given that one of every 10 teenage girls in the 14301 and 14303 ZIP codes in Niagara Falls become pregnant, according to state Health Department data.

“We can’t hide our heads in the sand on this,” Laurrie said

With that said, Laurrie also shows he has not looked very far away from under the sand, because, as Live Action News reported in 2016, these programs don’t actually work, according the the HHS:

With all of this in mind, it’s curious why the district would blindly adopt a curriculum that is part of a group of products  shown to be not only ineffective, but counterproductive. Despite the assertions of Planned Parenthood to the contrary, inviting the abortion giant’s presence in schools actually increases sexual activity, according to the evidence. Still, Planned Parenthood’s affiliate in New York insist the evidence says their programs do work.

The key phrase is “evidence-based,” said [Christopher] Spicer, [vice president of programs for Planned Parenthood of Western and Central New York] of Planned Parenthood. Spicer’s affiliate “sends representatives to 134 schools between Buffalo and Syracuse to talk to classes and present demonstrations of contraceptive use, such as how to apply a condom or insert an intrauterine device,” The Buffalo News reports.

Both the Planned Parenthood representative and Niagara Falls Superintendent Laurrie note that there is an opt-out clause for parents to keep their children out of Planned Parenthood supported classes, but that doesn’t happen much, The Buffalo News reports:

Planned Parenthood has found that very few parents opt out, said Spicer… And that is good for the students, he said.

“They are living lives so far removed from what we lived,” Spicer said.

“I think we need to open up more accessibility for outside agencies,” Laurrie said.

“No student shall be required to receive the instructions and information concerning the methods of prevention of aids [sic], provided his /her parent(s) or guardian files a written request with the District that the student be permitted to opt-out of the program.”

Few parents would say no to that, on the surface. What parent would not want their child be to safe from AIDS? It’s only when they dig in deeper that that they discover what’s actually in the curriculum that Niagara Falls began teaching this year. The district is misleading parents into believing that students are going to learn about avoiding the HIV virus, but they don’t realize the fringe lesson Planned Parenthood is always sure to include.

For example, in a sample lesson provided by the adopted curriculum, students play a game in which they decide which sexual behavior is risky. Certain sexual behaviors are deemed “Green Light” behaviors, which include behaviors most parents would likely not want their children to be discussing in a lesson, such as saying that if two people are virgins and have protected sex, it’s a “Green Light, as is “Body Rubbing/Grinding.” 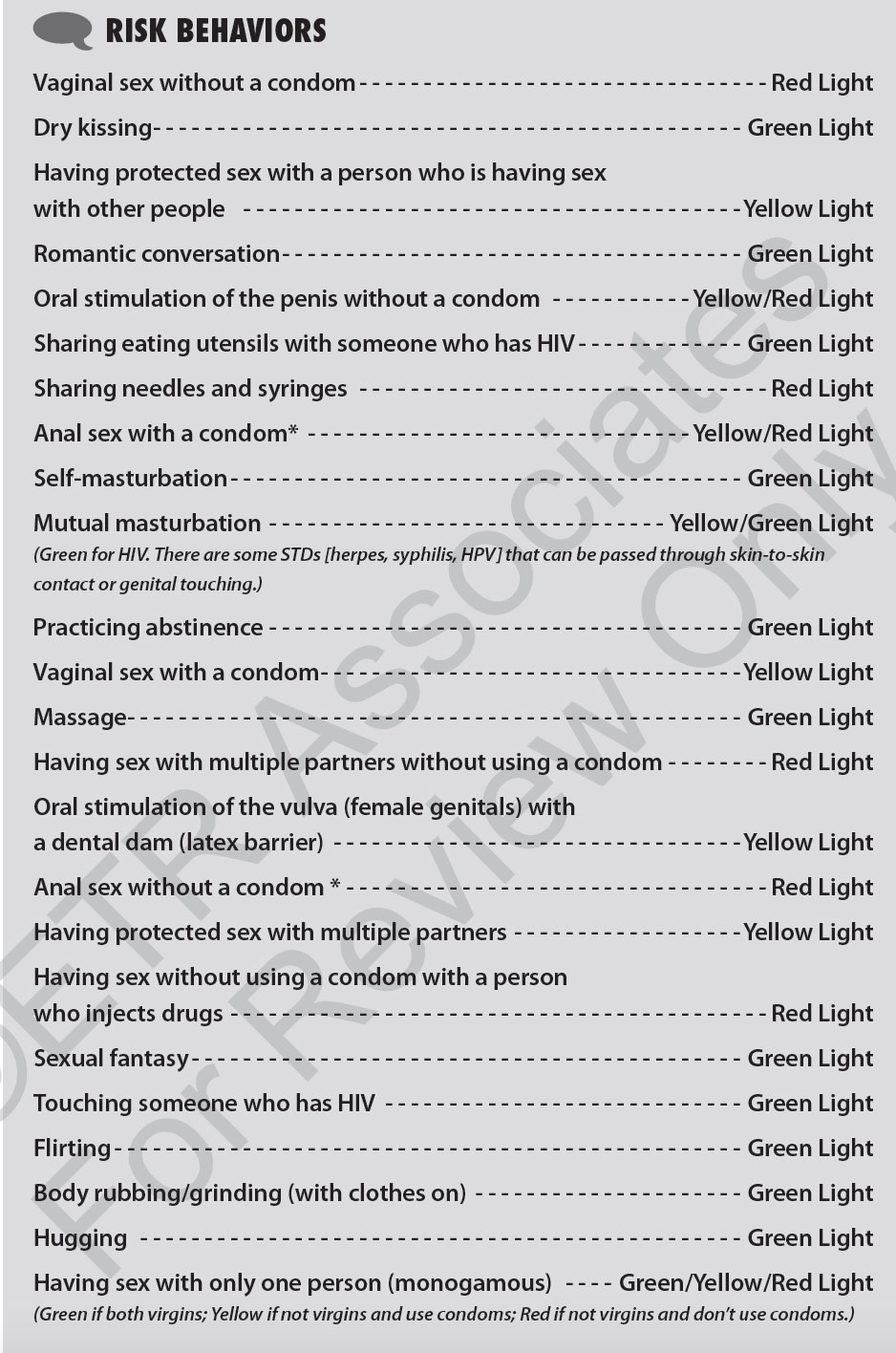 The reality of this opt-out clause is that many parents won’t know there is something to even consider. Until now, the district had been using an abstinence-only curriculum. Parents who knew that would not likely be expecting that mid-year, the day before the holiday break, the abstinence-only curriculum would suddenly be turned into a curriculum that has ties with Planned Parenthood. And unless the parents actually know to take time and file a written request with the district over the Christmas holiday break, their students will be subjected to this curriculum in February. At the pre-Christmas board meeting where the curriculum was approved 8-1, one parent spoke out about it. As WGRZ reported, Gary Boisclair said, “Anybody who is connected with Planned Parenthood is connected with each and every act that Planned Parenthood does.”

The lone vote against the curriculum was the board president, who had indicated he was opposed to it in earlier discussions, as The Buffalo News reported in November:

School Board President Nicholas Vilardo said he opposes abortion and doesn’t want anyone from Planned Parenthood promoting it. He questioned whether the personal views of the school employees escorting the visitors might cause a problem.

“How do we know that person can be objective and not have the same agenda?” Vilardo asked at a recent meeting.

Niagara Falls City School District has quietly changed from abstinence-only education to a sex education program that, as one of its components, allows Planned Parenthood to walk in the school and inflict its questionable moral code on students, while parents think their children are simply learning how to prevent getting HIV. This program isn’t about reducing teenage pregnancy; rather, it’s about encouraging the normalization of all sorts of sexual behavior, so long as the participants “use a condom.” Many ways exist to teach HIV prevention, which is a valid health education lesson, but letting the abortion corporation’s tentacles reach into sex education lessons is more like paying for a walking advertisement. Planned Parenthood knows if it can reach teenagers, it might have customers for years to come. And the Niagara Falls City School District, and its superintendent Mark Laurrie, have played right into the abortion corporation’s hands.