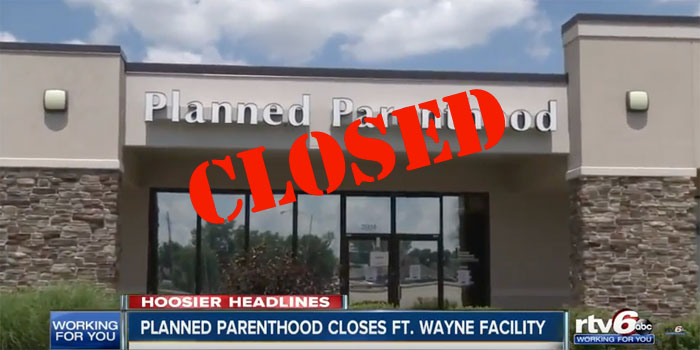 Visitors to the Planned Parenthood facility in Fort Wayne, Indiana, will find this sign on the door: “This health center is permanently closed.” Planned Parenthood has been telling news outlets that the closure came as a result of “intimidation and harassment of patients, providers, and supporters,” but the facts indicate something much more basic: Planned Parenthood and its abortion practice were simply losing support in the community.

READ: When a notorious abortion chain came to town, these citizens stepped up with peaceful action

While the Fort Wayne facility did not commit abortion, this was likely not from a lack of desire on Planned Parenthood’s part.

Instead, the medical community of Fort Wayne has largely chosen not to ally with abortionists. In 2013, Ulrich Klopfer, who committed abortions at another facility in Fort Wayne, had to stop when a local doctor decided to end his partnership with Klopfer. Indiana law required that “doctors practicing but not residing in the county [] have a relationship with a local doctor who can legally practice in Allen County.”

The doctor ended his relationship with Klopfer due to the abortionist’s failure to report child sexual abuse that had been perpetrated on girls who came to him for abortions.

The problem of failure to report the sexual abuse of minor girls has not been isolated to Klopfer or even to Fort Wayne. Allen County Right to Life reports that four Planned Parenthood locations in Indiana employ abortionists with consumer complaints filed against them:

Some of the girls under 16 years old who had abortions that weren’t reported to DCS were as young as 12 and 13. The alleged 48 instances of failure to report occurred since July 1, 2017. The 48 consumer complaints have been filed with Indiana Attorney General Curtis Hill and the Indiana State Department of Health. The Marion, Lake, Tippecanoe and Monroe county prosecutors have also been notified.

In addition to these complaints of bad behavior related to the treatment of minor girls, multiple Planned Parenthood facilities in Indiana have been investigated by Live Action. Staff at the facilities were found covering up the sexual abuse of minors, giving violent and possibly illegal sex advice to minors, spreading medical misinformation to women who asked about abortion, and failing to offer a full range of services for pregnant women in need.

Additionally, while Planned Parenthood prefers to blame its facility closure on pro-lifers in various communities, the fact is that Planned Parenthood is operating under a business model where it continues to close down facilities that are not bringing in enough money. Instead of remaining in areas where the abortion corporation claims women need to be served, Planned Parenthood closes down when its profit margins are reduced.

This is further indication that the blame Planned Parenthood seeks to place on “intimidation” is less than honest. Instead, American women, families, and communities are waking up to — and rejecting — the reality of Planned Parenthood’s business model: abortion on demand, no matter what it costs women and young girls.